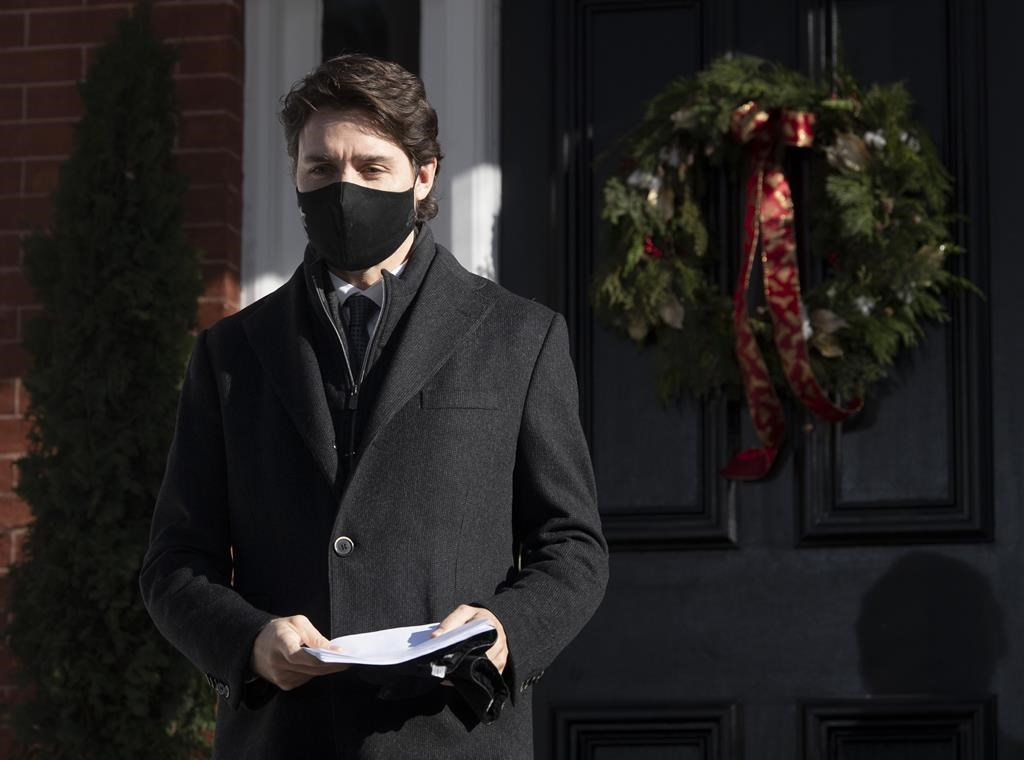 Prime Minister Justin Trudeau walk to the podium for a news conference outside of Rideau Cottage in Ottawa, on Tuesday, November 24, 2020. Photo by The Canadian Press/Adrian Wyld
Previous story
Next story

Prime Minister Justin Trudeau sought to reassure Canadians on Tuesday that COVID-19 vaccines will start to arrive in the coming months even as he acknowledged that other nations are likely to start inoculating their citizens first.

"One of the things to remember is Canada no longer has any domestic production capacity for vaccines," Trudeau said during his regular COVID-19 news conference outside his home in Ottawa.

"We used to have it decades ago, but we no longer have it. Countries like the United States, Germany and the U.K. do have domestic pharmaceutical facilities, which is why they're obviously going to prioritize helping their citizens first."

At the same time, Trudeau underscored the importance of getting inoculations to Canadians.

“We know we're not going to get through this pandemic without a vaccine," he said.

The federal government has signed orders for millions of doses from a variety of foreign pharmaceutical companies in recent months, he said, and Canada has been pushing the international community to ensure equal access for all.

“The very first vaccines that roll off an assembly line in a given country are likely to be given to citizens of that particular country,” he said.

“But shortly afterwards, they will start honouring and delivering on the contracts that they signed with other countries, including with Canada. We've secured millions of doses of the vaccines of the various vaccine candidates around the world.”

The expectation is that doses will start to arrive in Canada in the first few months of 2021, he added.

At the same time, Trudeau said, "we've begun to invest once again in ensuring that Canada will have domestic vaccine production capacity because we never want to be caught short again, without the ability to support Canadians directly.”

"Canada no longer has any domestic production capacity for vaccines," Trudeau said during a COVID-19 news conference outside his home in Ottawa. #COVID19 #vaccine #cdnpoli

The federal government announced in August that it was contributing $120 million over two years to build a biomanufacturing facility in Montreal that includes the National Research Council.

Ottawa previously committed $23 million to Saskatoon’s VIDO-InterVac operations in March and pledged $175 million to Vancouver-based AbCellera Biologics in May to boost its research and production capabilities.

Trudeau said it will take time for Canada’s own vaccine-production capability to get up to speed.

Conservative health critic Michelle Rempel Garner blasted the Liberals later Tuesday for not moving faster on that front. She also called on the government to provide a timeline for when Canadians can start to see vaccines in the country.

"Because until we have that information, there's no certainty for Canadians and I think that's leading to a lot of mental health issues, it's leading to business closures," she said.

During a separate news conference, Public Procurement Minister Anita Anand said Canada has signed contracts for more doses per capita than any country in the world and that efforts are now underway to prepare for their arrival in the next few months.

That involves buying 126 freezers, including 26 ultracold ones, to hold millions of doses of vaccines. Ottawa is also seeking private bidders to run the logistics and considering what role the military could play.

Health Canada has started work on approving three vaccines, Anand added, and deliveries won’t start until a vaccine candidate gets that green light.

The number of new COVID-19 cases across the country continued to grow, with more than 1,000 each in Ontario and Quebec along with nearly 60 new deaths.

Another 175 new cases were reported in Saskatchewan and 471 in Manitoba, where chief public health officer Dr. Brent Roussin warned the provincial health-care system is being pushed close to capacity.

The Manitoba government also reported it had issued one ticket — with more expected — in connection with a Sunday church service in a rural area near Steinbach, southeast of Winnipeg, that allegedly violated a ban on public gatherings.

Yukon was also adopting mandatory mask orders despite no new cases being reported.

“And it is clear that COVID-19 knows no bounds. Communities, jurisdictions and whole regions that were little, if at all, impacted in the past (are) now seeing community spread. Some areas are experiencing very high rates of infection for the first time.”

Meanwhile, the Ontario government said it would start distributing rapid tests for COVID-19, adding that the new tools are already being used in some hospitals and long-term care homes.

Ontario Premier Doug Ford said the province would continue to deploy the 98,000 ID Now tests and 1.2 million Panbio tests it has received from the federal government in the coming weeks.

The Quebec government clarified its plan for the Christmas holidays Tuesday, saying citizens can attend only two events in a four-day window.

Premier Francois Legault's government initially announced it would permit gatherings of a maximum of 10 people for four days between Dec. 24 and 27, and asked Quebecers to voluntarily quarantine themselves for a week before and after in exchange.

On Tuesday, Manitoba Premier Brian Pallister decided to weigh in on Quebec's plan, which he called "dangerous."

"I don’t want to get into quarterbacking other provinces. There are premiers there doing their absolute best, except to say this: I think it’s dangerous what the Quebec premier has decided to announce on Christmas," Pallister said.

In response, Legault said the number of new cases per million residents is currently lower in Quebec than Manitoba.

—With files from Steve Lambert in Winnipeg, John Chidley-Hill and Paola Loriggio in Toronto, and Morgan Lowrie in Montreal.

"One of the things to

"One of the things to remember is Canada no longer has any domestic production capacity for vaccines," Trudeau said... We used to have it decades ago, but we no longer have it."

It might be helpful to know more about when, why and how this happened. Multinational corporate takeovers? Free Trade agreements? Government reluctance to hand out massive taxpayer subsidies to profitable private corporations?

And how do we prevent it from happening again before the next pandemic?

Richard: please google Connaught Laboratories, and you will see yet another sad tale of altruism for the common good corrupted and slaughtered by privatization and what I have called “the business-ization of health care”!!