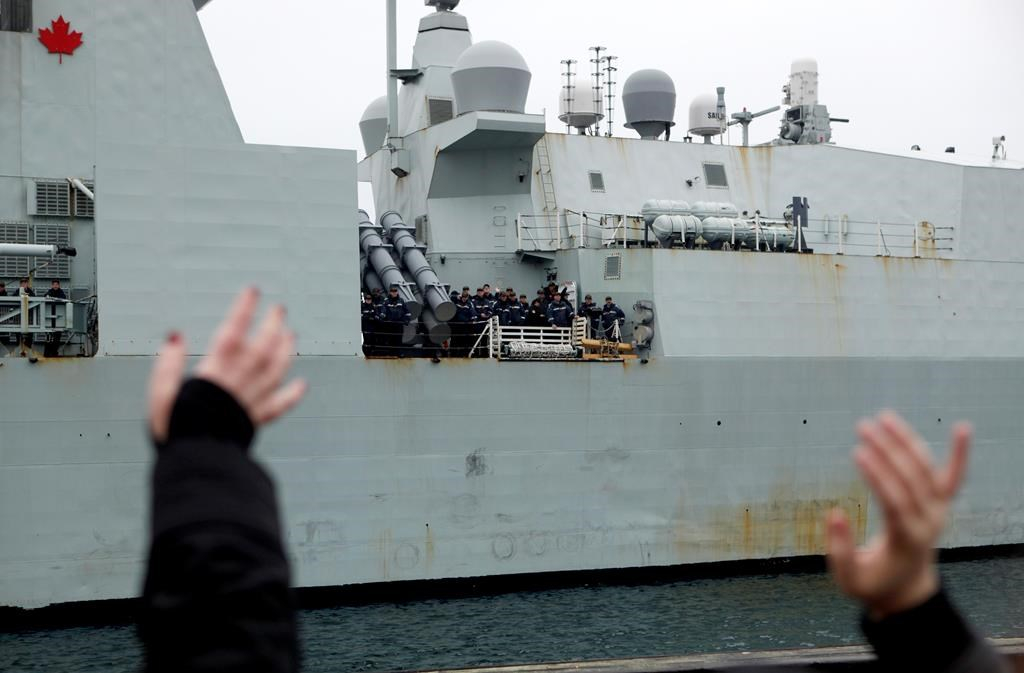 Family members and friends wait to welcome home the crew aboard HMCS Ottawa following its four-month deployment to the Asia-Pacific region as it returns to CFB Esquimalt in British Columbia on Dec. 18, 2019. File photo by The Canadian Press/Chad Hipolito
Previous story
Next story

Newly released documents have shed light on the secret government talks and debate that took place ahead of a Canadian warship's passage through a sensitive waterway near China last year.

Those discussions included a private meeting between the top bureaucrats at the Department of National Defence and Global Affairs Canada, weeks before HMCS Ottawa sailed through the Taiwan Strait.

And they were ordered to keep the Privy Council Office, the department that supports the prime minister, in the loop as the Ottawa was making its way through the waterway.

The unusual level of attention from the highest levels of government laid out in the documents, obtained by The Canadian Press through access to information, underscores the sensitivities surrounding the trip.

That is because while much of the world considers the 180-kilometre strait to be international waters, Beijing claims ownership of the strait separating mainland China from Taiwan.

Beijing, which regards the self-ruled island of Taiwan as a rogue province, has repeatedly condemned such passages by foreign warships from the U.S., Canada and elsewhere as illegal.

HMCS Ottawa ended up sailing through the Taiwan Strait twice in early September. Media reports at the time said the frigate was shadowed by the Chinese navy.

The heavily redacted memo to Global Affairs deputy minister Marta Morgan dated Aug. 7, 2019 starts by saying the Defence Department was looking for a risk assessment for the Ottawa's planned transit.

Defence Department deputy minister Jody Thomas "has also requested a meeting with you on Aug. 12 to discuss this deployment," the memo adds.

Political eyes were on a Canadian warship's passage through a sensitive waterway near #China last year. #HMCSOttawa #cdnpoli

While HMCS Ottawa was in the region at the time helping enforce United Nations sanctions against North Korea, the memo noted that the frigate was due to make a port visit in Bangkok in mid-September.

Defence officials have publicly stated that the decision to have the Ottawa sail through the strait was because the route was the fastest way for the frigate to reach Bangkok from its position near North Korea.

The memo backs that assertion, noting that going around Taiwan would add one or two days to the trip each way.

Yet it also says the navy's presence in the South China Sea, of which the Taiwan Strait is a part, "has demonstrated Canadian support for our closest partners and allies, regional security and the rules-based international order."

Global Affairs ultimately agreed to the Ottawa's sailing through the strait, but called on defence officials to keep the trip quiet, in large part because of fears the trip would coincide with the federal election campaign.

"Finally, GAC will ask DND to ensure that it keeps PCO informed as this naval deployment progresses," the memo adds.

Former Canadian ambassador to China David Mulroney described the discussions leading up to the Ottawa's transit of the Taiwan Strait as "an illustration of smart and effective consultation producing the right decision."

"It is tremendously important that China sees that, in addition to the United States, other serious countries like Canada will not be intimidated into surrendering the Taiwan Strait and Taiwan itself to China's complete control," he said.

"The RCN, working closely with Global Affairs, is promoting the national interest and asserting our sovereignty from the far side of the world."

Tankers struck near Strait of Hormuz; US blames Iran