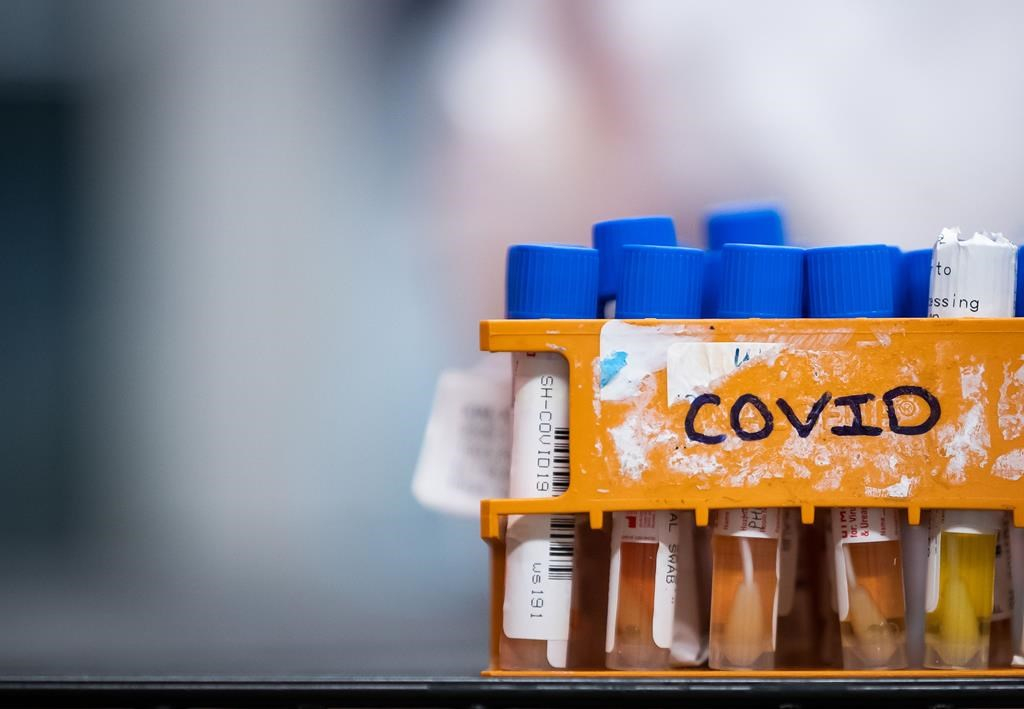 Specimens to be tested for COVID-19 are seen at LifeLabs after being logged upon receipt at the company's lab, in Surrey, B.C., on Thursday, March 26, 2020. File photo by The Canadian Press/Darryl Dyck
Previous story
Next story

When Kelly Lopes learned back in the spring that the Ontario government was ordering her teenaged children to stay home from school for their own safety but expected them and their parents to continue going to work, fear and anger set in almost immediately.

In the seven months since then, however, the grocery store cashier said those emotions have given way to a numbness she said is sustaining her as she battles through the COVID-19 pandemic in Ontario's hardest-hit region.

She said that as the second wave has swelled to shocking heights in Brampton, Ont., her job has gotten harder and customers have gotten more combative.

"A lot of us are burnt out," Lopes said Friday. "I get that we're not paramedics or first responders, but we're still a huge essential to a country that needs to eat. Without us being here, how do you get your food?"

Peel Region, just west of Toronto, has led the province in COVID-19 cases per capita for weeks now, with upwards of 180 new weekly cases per 100,000 residents — nearly triple the rate of the province as a whole.

Brampton makes up less than half of Peel's population, but accounts for more than 60 per cent of its COVID-19 cases.

Lopes said the fear she feels working on the front lines is compounded by customers who push back when she reminds them to keep a distance or wear a mask.

"We're tired. We're numb. We're overworked. We're frustrated, because it's not our rules," she said. "We're just trying to keep everybody else safe."

And data from Peel suggests that workplaces like Lopes' have some role to play in the virus's spread.

Dr. Adalsteinn Brown, a public health expert involved in preparing the province's COVID-19 projections, said Thursday that the virus is hardest to control in regions such as Brampton where households are larger and there's a higher proportion of essential service workers.

"These are long-standing structural factors here," he said. "These are not transient things related to the pandemic that drive these much higher rates of infection."

A quarter of all households in Brampton consist of five or more people, compared to less than 10 per cent of households provincewide, according to the latest census. And just 12 per cent of Bramptonians live alone, the census data shows, compared to nearly a third of Torontonians.

Meanwhile, Peel Public Health said there have been 137 workplace outbreaks of COVID-19 in the region since the pandemic began. A full third of those were in manufacturing or warehouse settings, while 14 per cent were in retail and 11 per cent were in food processing.

Brampton has a disproportionately large number of people who work in the manufacturing industry, said Gagandeep Kaur, an organizer with the Warehouse Workers Centre.

The city is home to numerous Amazon "fulfilment centres" and other large-scale warehouses.

Kaur said she's heard from workers that it's hard to maintain physical distance while moving around some of those warehouses.

But she said seeking safer employment isn't a simple matter, noting many workers are new immigrants to Canada trying to get on their feet.

"If you are a new hire in that facility, and you are a new immigrant in this country, your priority at that time is not the working conditions or what the employer is offering, because you have a family to feed or you have bills to pay," she said.

Dr. Farah Mawani, a social and psychiatric epidemiologist, said that's the sort of systemic racism that has put racialized people — and particularly new immigrants — at greater risk during this pandemic.

"We know that there's a very high portion of racialized immigrants who are highly trained and skilled, but very underemployed. So they're forced to work in manufacturing because they can't get other jobs," she said."

She said the issue is even worse for temporary foreign workers, whose migration status is tied to their employment at a certain company.

If they complain about poor working conditions, Mawani said, they risk losing not only their income but their place in Canada.

Brampton Mayor Patrick Brown said he feels his city has been unfairly maligned by those who grouse about high rates of COVID-19 without examining the root causes.

"There needs to be a bit of appreciation for the sacrifice that a lot of our essential workers are taking on," he said.

"When you think about it, if you go to a grocery store, wherever you are in Canada, the likelihood is that someone from Brampton has helped process that food."

He said essential workers in the city need greater support from the provincial and federal governments, while the city itself requires its own COVID-19 isolation centre.

Ottawa announced Thursday that it would open such a facility in Mississauga, Ont., another part of Peel Region.

But Brown said that's a 40 minute bus ride away for some of Brampton's more vulnerable residents, many of whom don't have cars.

"An isolation center is useful when people can't afford to rent a hotel room for 14 days, or they don't have a place where they can safely isolate," he said. "So I want to make sure that we have that support."

By Morgan Sharp | News, Politics, Next Gen Insider | May 19th 2020
Coronavirus in Canada