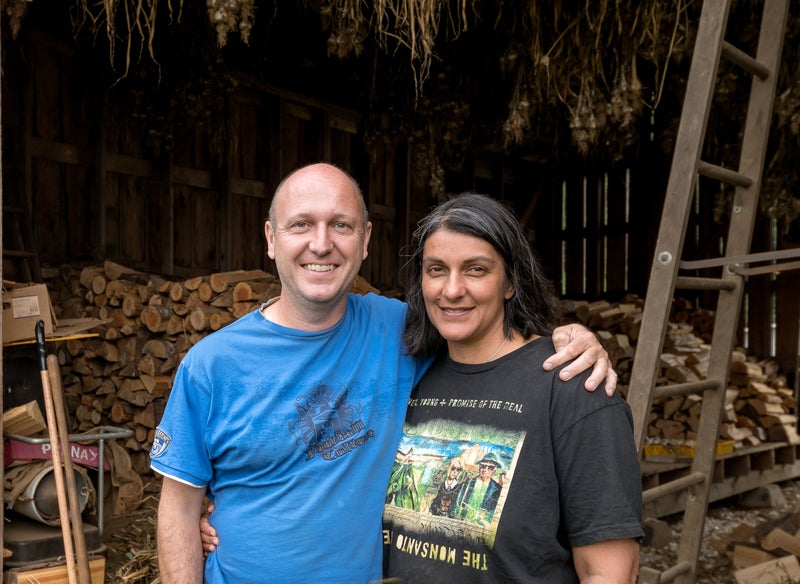 Neil Turner and Arzeena Hamir on their farm in Courtenay, B.C. Photo by Michaela Parks
Previous story
Next story

Electric tractors and more payments for ecological services — that’s what dreams are made of for Arzeena Hamir, who says more government money toward climate solutions in agriculture would mean big steps toward reducing emissions on her Comox Valley farm.

Hamir is the co-chair of Farmers for Climate Solutions, a Canada-wide organization advocating for advancing climate-based agricultural policies, as well as an owner of Amara Farms in Courtenay, B.C.

"As farmers, we see the impact of climate change incredibly intimately," said Hamir. "So, on my farm here in the Comox Valley, we're seeing just incredibly unpredictable weather. And so I'm incentivized to get involved in this."

In 2018, agriculture made up eight per cent of the country’s greenhouse gas emissions, with the majority of those emissions coming from livestock digestion and the use of inorganic nitrogen fertilizers.

Amara Farms, an organic produce operation, has made environmentally friendly strides — it adds carbon-based fertilizers to its soil, reduces tillage to keep more carbon in the ground and has installed solar panels. However, Hamir says there’s only so much a small farm can do without financial incentives. Things like electric farm vehicles are out of their price range.

"The $300-million ask is really to get some policy in place that directly impacts some of the climate change ... repercussions of agriculture. So it incentivizes farmers to change their practices," Hamir said.

Karen Ross, director of Farmers for Climate Solutions, echoed Hamir’s sentiments. She said although the announcement of almost $100 million is a positive sign of commitment from decision-makers, more needs to be done to help farmers reduce emissions in Canada.

“Most of this money ... goes towards current existing programs run by Agriculture Canada that helped to build the research base on climate change impacts and climate mitigation practices in agriculture,” said Ross.

Of the $98.4 million in funding for climate solutions announced last Monday, $85 million is set to maintain existing programs.

“So what we need now is investments in farmers and ranchers to change practices on farms, so that they can reduce emissions and build resilience. And we haven't yet seen that in a budget.”

In terms of what the $98-million fiscal update announcement actually means for people like Hamir and Ross, the Department of Finance Canada said the details will be provided at a later date.

“This measure announced in the fall economic statement will focus on the adoption of practices on farms that will support the long-term removal of CO2 pollution (carbon sequestration) on agricultural lands,” Benoit Mayrand, a spokesperson for the department, wrote in an email.

“These include creation of grasslands, the improvement of shelterbelts and hedgerows, and the cultivation of cover crops. As mentioned in the FES, it will be developed in collaboration with partners. Agriculture and Agri-Food Canada will provide more information on this initiative in due course.”

In Ross’ eyes, more money is needed not only for pilot programs, but also for education. She says that’s one way to catalyze change in the agricultural community.

“The way farming works, it takes a lot of guts to try something new. But if you see a neighbour doing something new, then all of a sudden you’re like, ‘Hey, the sky didn’t fall. It’s possible.’ In fact, that neighbor is doing a little better. And then that’s how we see change in our sector,” she said.

“So for us, it's like that $300 million goes a long way towards starting to shift the cultural and social ideas around what it means to do climate-friendly farming in Canada.”

I have been a contributor to

I have been a contributor to the Ontario Farmland Trust for many years, and while I applaud their efforts, I wonder what potential lies in relying on kind-hearted farmers who grant agricultural easements on their property as a means to save some of the best farmland in our country. Why grow vegetables or grant an easement when you can sell your land to a developer and live the rest of your life as a multimillionaire? Now our Premier seems to be 'paving' the way for expansion of the GTA and so as to give up more of our precious wilderness and farm land.. and who can blame him?.. even before Covid, living in a condo was a compromise, and now our Prime Minister is promising to bring more 1.2 million more immigrants to Canada. It was not long ago that many in our country were making a run on PPE and proclaiming the virtues of domestic sourcing, so as not to be reliant on other countries; and yet we continue to outsource more and more of our food production. Some say that the French Revolution was caused in part by a change in climate which resulted in poor harvests, which combined with an ever growing population to cause high unemployment and high food prices. Hopefully, the future will not hold a similar scenario for Canada, or for our fellow countries in the world, but perhaps we should prepare for such a contingency.