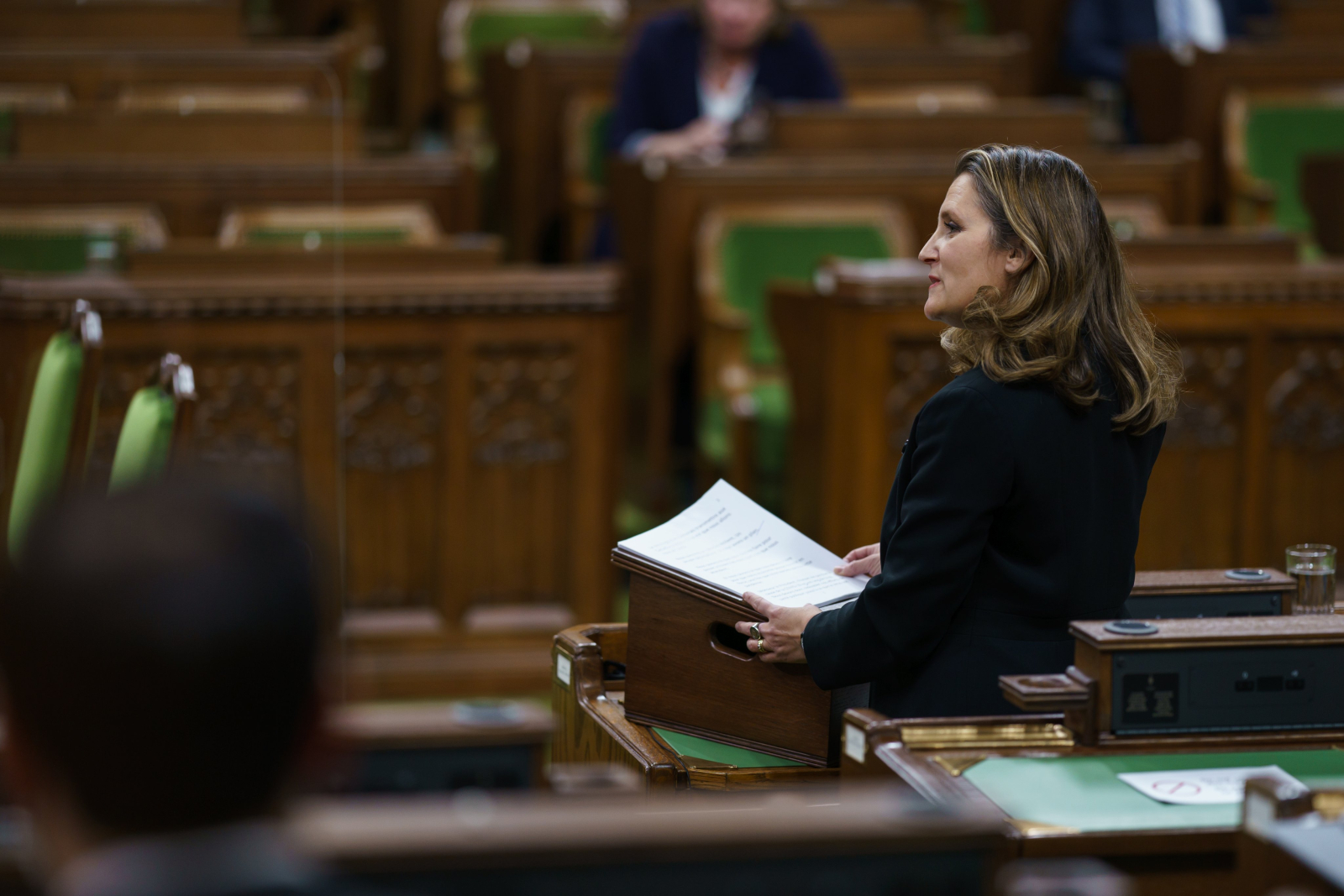 The federal Liberal government unveiled a suite of environmental measures on Monday as part of its fall fiscal update, proposing spending on things such as ecosystem restoration, clean transport and energy efficiency.

Ottawa will be exploring the possibility of border carbon adjustments, where a fee is imposed on imports from countries without carbon pricing, so foreign products don't undercut those produced in Canada by companies subject to Canadian carbon pricing systems.

And it will be setting up an “action council” focused on developing a sustainable finance market in Canada that would see capital flows redirected toward green initiatives.

That will include looking at “enhancing climate disclosures,” the government said, as directors of Canadian corporations face mounting obligations to act on the risks posed by the climate crisis as part of the responsibilities of their jobs.

But with Canada’s deficit projected to hit $381 billion in 2020-21, Prime Minister Justin Trudeau’s government is pushing back any larger stimulus plan until a vaccine is being distributed and outbreaks and shutdowns are in the rearview mirror.

“When the virus is under control and our economy is ready to absorb it, we will deploy a three-year stimulus package to jumpstart our recovery,” reads the statement. “Key to this stimulus plan will be smart, time-limited investments that can act fast and make a long-run contribution to our future shared prosperity, quality of life, competitiveness and our green transformation.”

Reaction was muted from some opposition members. Conservative Leader Erin O’Toole dismissed the economic statement soon after Freeland tabled it as “putting the economy on hold.” He portrayed the government’s approach as wrongheaded, looking forward to future stimulus potential without first getting public health fundamentals correct.

The Liberals were “not willing to ask the wealthiest to pay their fair share,” said NDP Leader Jagmeet Singh, by taking steps to secure new revenue sources from large corporations making “massive profits” during the pandemic.

“This is the exact opposite of what people need,” he said.

Funding to address issues such as retrofits and clean transport was central to proposals issued last month by a coalition of more than two dozen environmental and conservation groups in Canada.

The federal Liberal government unveiled a suite of environmental measures on Monday as part of its fall fiscal update, proposing spending on things like ecosystem restoration, clean transport and energy efficiency.

The Green Budget Coalition’s roadmap for a federal green recovery called for $10 billion for energy efficiency retrofits in buildings, among other commitments.

Monday’s economic statement commits to $2.6 billion over seven years for Natural Resources Canada to provide up to 700,000 grants of up to $5,000 each for homeowners and landlords to carry out energy-efficiency upgrades.

The government said buildings account for 17 per cent of emissions, and “helping Canadians make their homes more energy efficient can support our environmental objectives, while making homes more comfortable and more affordable to maintain.”

“We know that Canada’s future competitiveness depends on our ability to take advantage of the net-zero green economy,” Freeland said in Parliament after tabling the document. “Our growth plan must continue to advance our progress on climate action and promote a clean economy.”

“The announcement today is a start, and a piece of the puzzle,” Diamond said. “But a lot more is required if we're going to be able to help Canadians.”

He said there appeared to be “gaps in some high-impact areas,” including specific supports for low-income programs. “What is essential in all of this, however, is that the federal strategy integrates with existing programs on the ground, across the country,” he said.

The Green Budget Coalition had also asked the federal government for $2.6 billion for “nature-based climate solutions” and $4.8 billion to support protected areas.

The economic statement proposes to spend $3.16 billion over the next decade, starting in 2021-22, in order to follow through with its promise to plant two billion trees.

It also proposed up to $631 million over 10 years, starting next year, to “implement climate smart, natural solutions to reduce greenhouse gas emissions related to ecosystem loss.”

The statement acknowledges that Canada’s grasslands, wetlands and peatlands are “highly valuable for their ability to store greenhouse gases,” and proposes funding to “restore degraded ecosystems, protect wildlife, and improve land and resource management practices.”

The government estimated that these kinds of “nature-based solutions” can provide “almost 40 per cent of the emission reductions needed by 2030.”

Because of jurisdictional issues, both of those initiatives will require Ottawa to work with a wide range of partners, including provincial and territorial governments, Indigenous communities, conservation authorities and non-governmental organizations.

The government also touted a $98-million Natural Climate Solutions for Agriculture Fund, to capitalize on the potential of Canadian farms to increase carbon sequestration and “realize other environmental benefits” that will come out of a future “Canadian Agri-Environmental Strategy.”

Keith Stewart, senior energy strategist at Greenpeace Canada, said the economic statement was “yet another promise to go big on climate change and inequality at a future date.”

Canada has made decades of “down payments without ever sealing the deal,” Stewart said. “We can fight the pandemic in a way that lays the groundwork for a greener, more equitable and inclusive future but this economic update doesn’t do that.”

He said environmental groups will have to "keep the pressure on" for the forthcoming new 2030 emissions reduction target, and plan to achieve it, as well as the 2021 budget.

The government said it was “committed to ensuring that Canada’s transition to a low-carbon economy is achieved in a way that is fair and predictable for our businesses, and supports Canada’s international competitiveness.”

To this end, the economic statement said the government was “exploring the potential” of a border adjustment for carbon, working with the United States, Mexico and “like-minded economies” in Europe.

The government also plans to set up a public-private Sustainable Finance Action Council, as institutions and investors around the world increasingly evaluate climate change risks to company assets.

The Bank of Canada has warned that sectors such as oil and gas are exposed to risks that could spill over into “fire sales.”

“Developing sustainable finance in Canada will promote the long-term growth and stability of our financial system in the face of climate change,” reads the economic statement. The commitment is worth $7.3 million over three years.

Finally, Ottawa announced its intention to “issue the federal government’s first-ever green bond in 2021-22,” that it said would help finance its green infrastructure spending.

Yes, lots of slightly-more-focused promises to support green projects in major areas (all of which are needed though much faster and bigger) ... while sidestepping the biggest elephant in the room: oil/gas industry plans to blow past any GHG targets and the pipelines, one of which Trudeau insists on shovelling billions into. And no legal targets in their 5-year plan until 2030. A less-than-halfway green transformation in Trudeau-speak, not deed.