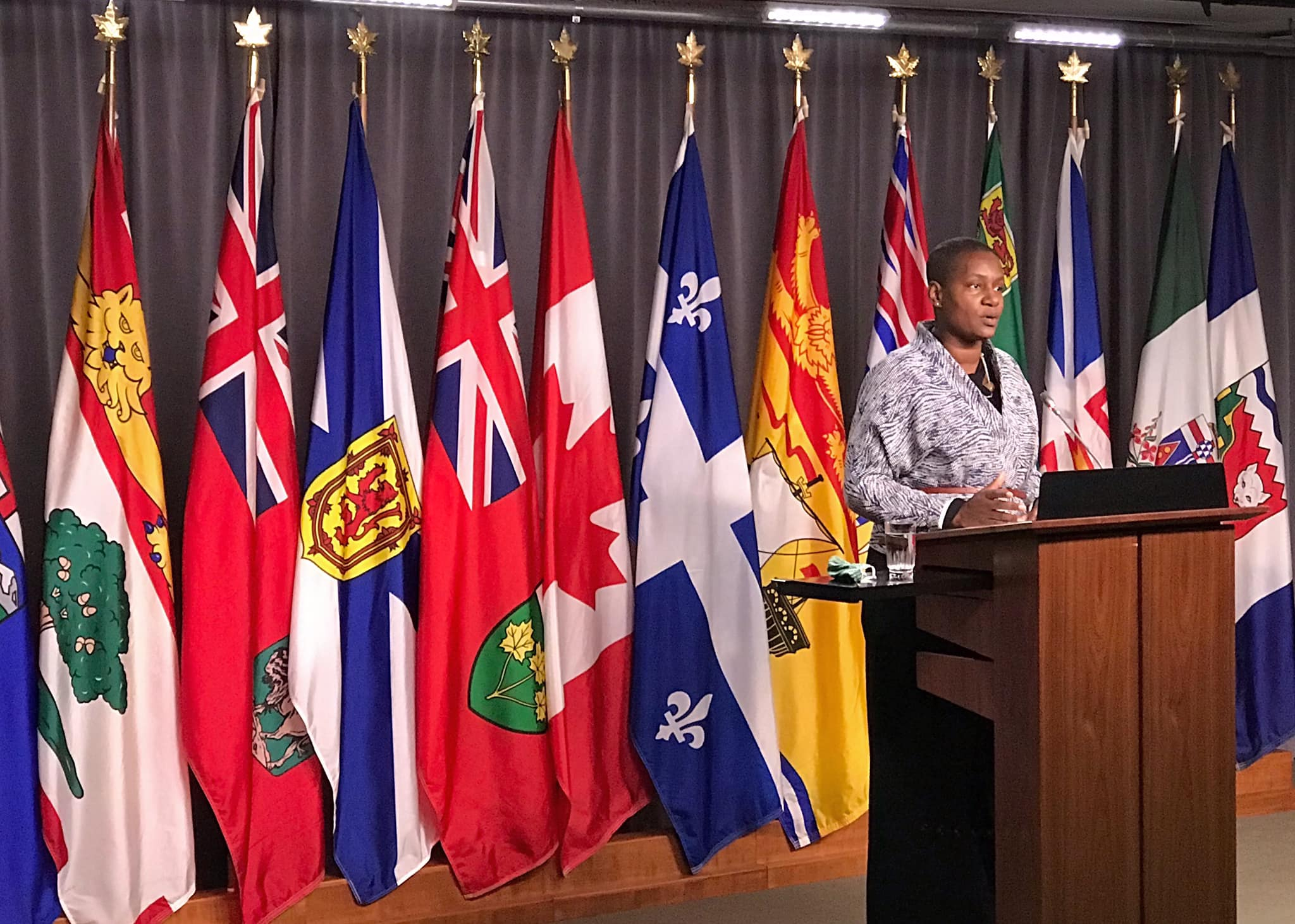 Many Canadians have been left stunned or in tears after being told by the Canada Revenue Agency that they might need to pay back all the money they got from the Canada Emergency Response Benefit (CERB).

Parliamentarians are reporting their offices are being flooded with calls from CERB recipients at their wits’ end after getting alarming-sounding letters from the CRA suggesting they might need to repay every one of the $2,000 payments by Dec. 31, 2020.

That’s an impossible situation for many self-employed Canadians who are barely staying afloat, having already been slammed with the COVID-19 pandemic’s economic fallout.

“We’ve spent the last 10 years of our lives learning to be financially responsible. We finally got ourselves out of debt ... I don't know how we’re going to come up with any additional money,” said Cory Perry, whose spouse Diane Duplessis runs a private daycare outside Fredericton that had to close at the beginning of the pandemic.

“For us, the financial impact, if we’re required to pay this back ... the only way I can think of to come up with that kind of money is to either get a loan, which is going to cost us a fortune at the end of the day, or to have to sell the house.”

CERB recipients say the situation is due to a lack of a clear explanation from the CRA over eligibility for the CERB, specifically when it comes to clearing the income threshold for claiming the benefit.

An eligibility webpage for the benefit states that in order to claim the $2,000 CERB payment, recipients must have earned a minimum of "$5,000 (before taxes)" in the last 12 months, or in 2019, from employment or self-employment income, or from maternity or parental benefits.

But the CRA says this income threshold is calculated after a recipient has deducted their expenses, a fact that is not spelled out explicitly on the eligibility webpage.

That means the CRA considers Canadians who may have cleared the threshold before expenses but did not clear it after expenses to be ineligible for the CERB.

'We're talking about hundreds of thousands of people'

The agency denies changing the rules, and said it already calculates self-employment income as “net pre-tax income” or, in other words, "gross income less expenses." It pointed out that another webpage that contains a Q&A about CERB does include this distinction.

Green Party Leader Annamie Paul is calling on the government to suspend CERB repayment requests until the new year after some recipients got letters from the CRA suggesting they might need to repay everything by Dec. 31, 2020.

CRA spokesperson Sylvie Branch said individuals who got the letter should not see it as a final determination they must pay back the money — only that the agency does not yet have enough information from recipients to confirm CERB eligibility.

Branch also said the Dec. 31 date in the letter is not a payment “deadline,” just a preferred date to avoid impacting 2020 income tax returns.

Green Party Leader Annamie Paul, however, says the confusion is so rampant that the government should be suspending the requests for repayment at least until the new year.

“Everyone knows someone, I’m pretty sure, who got that letter. We’re talking about hundreds of thousands of people. And we’re just around the corner from all of our major holidays — it is really Scrooge-like, this whole thing,” Paul said.

“These are people who do their due diligence. No one was looking to game the system ... we shouldn’t be designing our entire approach around the very small number of potential real cheats.”

'CERB was money that I used to live on'

One of those people who did their due diligence is Amy MacCutchan, who owns and operates HooperSonic, a Toronto-based hula hooping instruction and entertainment company started in 2015.

“I make the majority of my money in the summer months by going to camps and schools and doing birthday parties and doing Christmas events ... it’s a physically demanding job,” she said.

She said she was very careful to check CERB eligibility, reading over the rules multiple times, and has kept detailed records in a spreadsheet about her income including HST. She said the CRA never explained to her the issue of calculating the income threshold after expenses.

“Never was it communicated in that way,” she said. “It makes me not want to be a small business owner. It just turns me off to the idea, as somebody who’s been trying throughout this entire pandemic to keep things online and roll with the times.”

MacCutchan said if she was forced to pay everything back, it would have to go on her personal debt.

“The money from CERB was money that I used to live on, and contribute to the bills within my family,” she said.

'This is not the time to do it. There is no urgency'

Perry said when Duplessis originally applied for the CERB in the spring, they tried getting through to a representative at the CRA to ask questions, but the phone lines were jammed. The CRA said at the time that its phone lines had been experiencing technical difficulties.

After getting the letter from the CRA, Duplessis broke down in tears, Perry said. It was only after contacting their accountant that they learned her expenses had brought her net pre-tax income down below the income threshold, so she did not qualify.

During the spring, an anonymous government official told CBC News that the government would spend less time confirming whether claims were justified, and claw back ineligible payments after the crisis was over.

“I understand they wanted to get this into Canadians’ hands quickly,” Perry said about the government’s CERB rollout. “But it’s still their responsibility to vet the applicants.”

Paul said the government needs to acknowledge that, from the very beginning, the CERB was positioned as “prioritizing speed over clarity.”

“Many of the people who received these letters are people who are still struggling or are about to go under. This is not the time to do it. There is no urgency — the CRA does not need to be going to this particular pool of taxpayers and using this blunt instrument.”

Branch said the CRA was “taking an educational approach” with the letters.

“The goal of the letter is to explain what qualifies as earned income to be eligible for CERB, and what does not. The letter strongly encourages those individuals who have yet to file their 2019 returns, to do so as soon as possible, as this is the simplest way to confirm their eligibility,” Branch said.

Branch said it was also important to note that Canadians who applied for the CERB “in good faith” and are required to pay the money back “will not be charged with penalties or interest.”

The CRA is also “sympathetic” to the fact that repayment “may have financial implications,” said Branch, and “for this reason, payment arrangement parameters have been expanded to give Canadians more time and flexibility to repay based on their ability to pay.”

Those Canadians who cannot make the full payment are “advised to contact the CRA to make a payment arrangement,” Branch said.

We knew we didn't qualify so

We knew we didn't qualify so we never applied. WE have been very lucky not to have needed the help and even more lucky not to have had, so far, to deal with the plague. Nevertheless, I am greatly disappointed that the Cabinet, CRA and responsible bureaucrats did not make it much clearer from the get-go that repayment might be required. This is a signal failure of governance. To neither imagine the scope of the economic disaster, nor to manage their communications more stringently and with greater humanity.

Just because we are now expecting relief from Vaccines - which will be excruciatingly slow to roll out and slower to take effect, is no excuse for dropping this hammer on the heads of Canadians struggling to survive.

As someone who ran a small

As someone who ran a small business for over 8 years after retirement, I do have some questions. It took me three years to be making a profit, and I was shocked the year I made 6000 after expenses, by how much tax the government wanted.......but:
1. If I had continued to see my 'expenses' eat up all my profits......to the point where I didn't even make 5000 in a year, I'd have shut down.
2. I've been wondering for some time, why coffee shops and grocery stores always wonder if I want my receipt....speculating on what I could deduct it from, were I still in business.

So now I'm wondering this. Do some Canadians have business' that never make any money........but that pay for expenses and keep them from having to pay taxes??? I don't want to be mean spirited.........but business' that don't make money may just be uneconomic.

I hope we aren't going to bend over backwards to keep outfits that just break even going. Seems like a lot of work for pocket change.......or tax avoidance, to me. By the time I shuttered my business, I was paying the corporate rate.......15% of profits at the time..........after deducting expenses.