Canadian police chiefs apologize for opposing the decriminalization of homosexuality 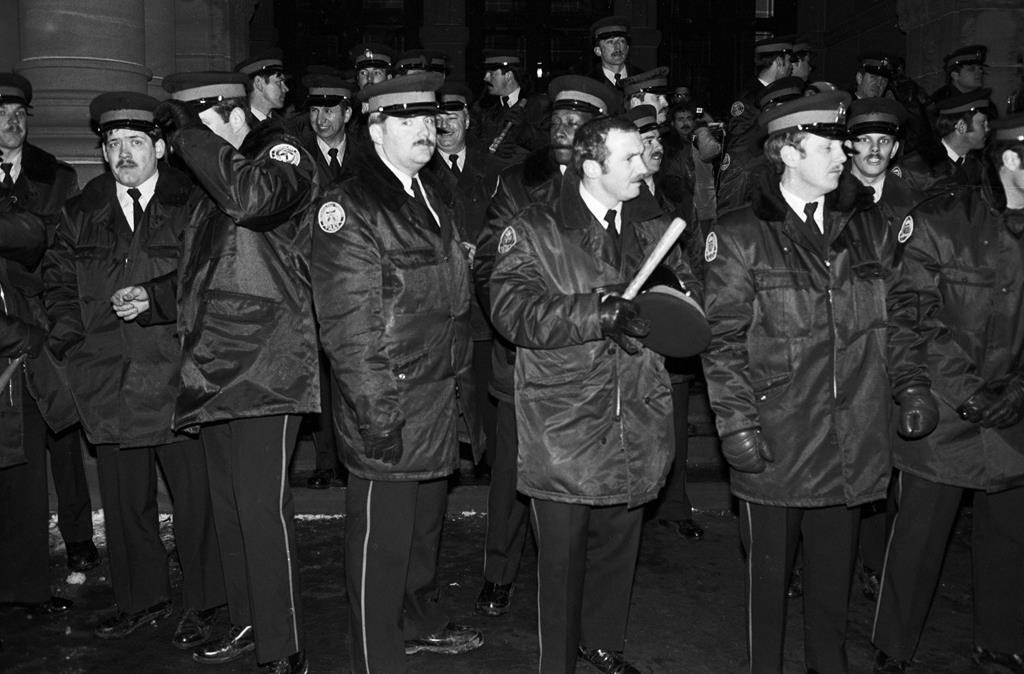 Police officers stand on the steps of the Ontario Legislature in Toronto on Feb. 7, 1981, after about 1000 gay rights demonstrators marched there in protest of the arrests on Feb. 5, 1981 of 253 men in four city steam baths. Photo by UPC-Gary Hershorn
Previous story
Next story

Canada's police chiefs are apologizing to LGBTQ communities for their opposition to decriminalizing homosexuality in the late 1960s.

The Canadian Association of Chiefs of Police made the formal apology in a statement issued online Thursday.

Chief Bryan Larkin, president of the association, said it was the culmination of two years of research and consultation after a member of the organization pointed out that the group publicly opposed amending the Criminal Code to decriminalize homosexuality in 1968.

"We felt on the International Day of Human Rights this year was the right opportunity for us to make the apology, to reconcile our past, and to begin the healing process moving forward," Larkin said in an interview.

The lengthy apology said police continued to criminalize members of sexual and gender diverse communities even after homosexuality was decriminalized by the federal government.

"We acknowledge the pain our actions have caused, the personal suffering, shame and trauma our public positions contributed to, and the deep distrust and divide that was created by the positions we took," the statement, signed by Larkin, said.

"We take responsibility for our past wrongdoings and, on behalf of the Canadian Association of Chiefs of Police, I am sorry."

The association said it's also releasing a "tool kit" offering specific guidelines, best practices, and recommendations for Canada's 194 police forces on how to best deal with LGBTQ communities.

Tom Hooper, a historian at York University who has written extensively about the relationship between Canada's LGBTQ communities and police said he feels the police chiefs didn't consult enough with the affected communities.

Canada's police chiefs are apologizing to #LGBTQ communities for their opposition to decriminalizing homosexuality in the late 1960s. #humanrights #gayrights

"They've initiated the apology, this apology is occurring on their terms," said Hooper. "I'm not entirely sure who it's directed at or what it is we're supposed to do with it."

Larkin said that the apology and tool kit were created in consultation with the association's equity, diversity and inclusion committee, which includes members of the LGBTQ communities.

He also said that the association plans to hold a symposium on its apology in partnership with a national advocacy group next year, when easing of public health restrictions due to the COVID-19 pandemic will make an in-person conference possible.

Hooper said that it's not just Canadian police forces that need to make amends for the way LGBTQ communities were criminalized through the 1970s and '80s under the country's ‘Bawdy House’ law.

"The police definitely have responsibility here but it was also the law," said Hooper, who is a member of the LGBTQ community himself.

"The police relied on these 19th century morality offences and when they brought men to court on these charges, including the 1981 Toronto bathhouse raids, they obtained convictions, courts upheld these practices because it was the law."

Distrust of the criminal justice system is an ongoing concern for LGBTQ communities according to Hooper, because it leaves them vulnerable to violent or even predatory behaviour.

"The problem with policing wasn't just criminalization, it was harassment and it was also lack of protection," said Hooper.

"When we look at what happened with (convicted serial killer) Bruce McArthur, we see that in the 1970s not only was this criminalization being doubled down on, but the harassment on the street and the culture of fear that was created between police and the community meant that when we faced violence there was no where to turn."

McArthur is currently serving a life sentence for the murders of eight men from Toronto's gay village between 2010 and 2017.