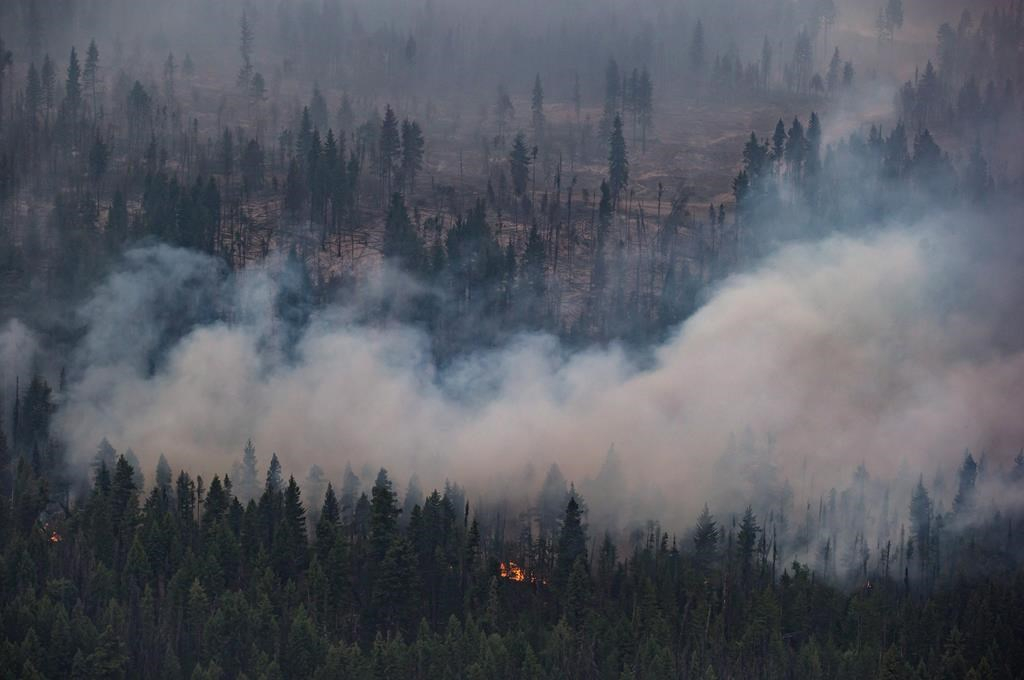 Wildfires have taken over from industry as a major source of a group of cancer-causing chemical toxins in the air, Environment Canada says.

The first national assessment of polycyclic aromatic compounds in more than 25 years has found that air has improved around aluminum and steel plants. But wildfires and vehicles have stepped in to keep average concentrations at about the same level that they were in the 1990s, says federal researcher Elisabeth Galarneau.

"Those big industrial point sources have been reduced to a very small fraction of the total," she says. "The largest (remaining) source by far is the natural emissions from forest fires."

The levels are still high enough in many places across the country to exceed health guidelines, the assessment found.

Polycyclic aromatic compounds are created during burning of everything from oil to wood to cigarettes. Many are carcinogenic and are considered priority pollutants by the U.S. Environmental Protection Agency.

No federal guidelines for the chemicals exist. Alberta, Quebec and Ontario have set recommended levels, but Galarneau said only Ontario's are based on the effects on human health.

"(Ontario's) guideline is exceeded almost everywhere we looked in Canada," Galarneau said. "The exceedances in some areas are well over an order of magnitude."

The increasing size and severity of wildfires is a big reason why the levels haven't changed despite improved industrial emissions, she said.

"We would normally have called those natural, but now forest fires are seen to be increasing in frequency and severity because of climate change. There's now a (human-caused) component."

Research has found that climate change contributes to bigger, hotter fires by drying out forests and extending the fire season.

Other increased sources of the chemicals are increased vehicle emissions as well as residential wood-burning. The contributions of those sources vary widely from place to place.

Vehicles account for less than 10 per cent of emissions nationally, but in Toronto they can reach 50 per cent or even higher.

Galarneau warned that her research isn't the whole picture. Her team looked at only 16 different compounds, a list that dates back to the 1970s. Analytical chemistry has come a long way since then. Scientists are becoming increasingly concerned about other similar chemicals that aren't on the list, she said.

"Everywhere you look, it seems people are coming to the same conclusion. There are other compounds beyond those 16 that make toxicity, and our measurements and models should probably expand to incorporate those."

The paper points out that concentrations of toxins in the air increase by factors of 1.4 to 6.2 when the number of compounds tested for is expanded.

The 16 compounds in this study became priorities because of their association with cancer. Galarneau said cancer isn't the only health danger from the chemicals on the expanded list. They are thought to have effects on the lung and liver as well.

"We know less than we do for the 16, but there's a body of evidence that is growing and identifying toxic effects associated with them," she said. "Some of these other (chemicals) are also implicated in non-cancer health outcomes."

The study is the fourth in a series of recent research publications on Canada's air quality. Two more are due and a final summary report is to be released in the coming months.

A burning planet: Why we must learn to live with fire