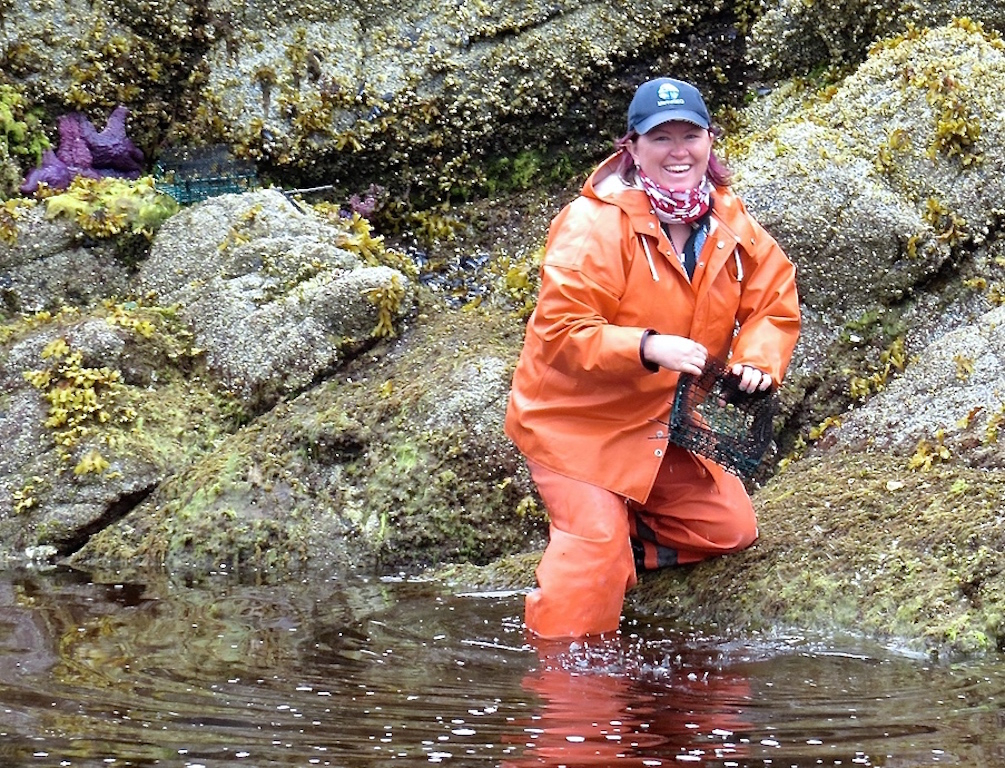 Alyssa Gehman, a researcher at the University of British Columbia and the Hakai Institute, says some of the few remaining populations of sunflower sea stars exist on the B.C. coast. Photo courtesy of Keith Holmes
Previous story
Next story

The magnificent sunflower sea star, once ubiquitous along the Pacific coast, is now critically endangered after more than 90 per cent of the species was wiped out by a marine epidemic ravaging its population.

One of the largest sea stars in the world, the orange or purple Pycnopodia helianthoides is impressively fast and can span up to a metre across with 15 to 24 arms. Historically located along the coast from Baja California north to Alaska, the sunflower sea star has been decimated by sea star wasting disease (SSWD), which research suggests is exacerbated by warming oceans tied to climate change.

The International Union for Conservation of Nature (IUCN) listed the sunflower sea star as critically endangered last week based on a population study led by Oregon State University and the Nature Conservancy in partnership with a coalition of more than 60 researchers and institutions.

The sunflower sea star is on the brink of extinction and the scale of the loss is difficult to comprehend, said Vienna Saccomanno, ocean scientist at the Nature Conservancy and a co-author of the study.

“This marine wildlife epidemic is responsible for the deaths of over 5.7 billion animals — that’s the equivalent of every single smartphone on the planet disappearing twice over,” Saccomanno said.

But as the sea stars diminish, urchins left unchecked are capable of mowing down kelp forests, a critical source of food in the marine environment, said Gehman, a researcher with the University of British Columbia and the Hakai Institute with a base on Quadra Island.

The B.C. coast hosts some of last small remaining populations of the sunflower sea star, now almost completely absent from the waters off California and Mexico, Gehman said.

Research to find where these sunflower sea stars still exist, and why, is urgently needed to support their recovery, she added.

“This marine wildlife epidemic is responsible for the deaths of over 5.7 billion animals. That’s the equivalent of every single smartphone on the planet disappearing twice over,” Vienna Saccomanno of @nature_org says about sunflower sea stars.

“Figuring out where they are will give us an understanding of the areas we might be able to protect,” Gehman said.

“And an understanding of why they survived can lead to information on how we could help preserve them.”

People who spot the sea stars while diving, pulling up crab traps or at low tide can help researchers by recording data around sightings using the iNaturalist app, which can be downloaded to cellphones.

The disappearance of the sunflower sea star was noticed in 2013 when the wasting disease started to decimate populations along the northwest Pacific coast.

The disease, linked to a virus, starts with white lesions on sea stars that soon cause their limbs to fall off, reducing the creatures to white piles of mush.

A captive breeding program led by the Nature Conservancy and the University of Washington is getting underway in hopes of boosting the sunflower sea star population, Gehman added.

“A first step is to research on whether we can breed them in captivity safely,” she said.

Making the IUCN Red List emphasizes the risk the sunflower sea star faces and the research and steps needed to facilitate its recovery, Gehman said.

Sarah Grave, lead author of the study leading to the sea star’s endangered status, agreed more is needed to be done to save the marine animal.

“I don’t think they’re coming back without our help,” she said.

Another victim of the super

Another victim of the super spreader virus called humanity. Our greedy overpopulation and over consumption of natural resources has precipitated this looming extinction crisis. How pathetic that we try to plug the leak in the ecosystem with a captive breeding program. Our ignorance and stupid responses will undo life on earth.