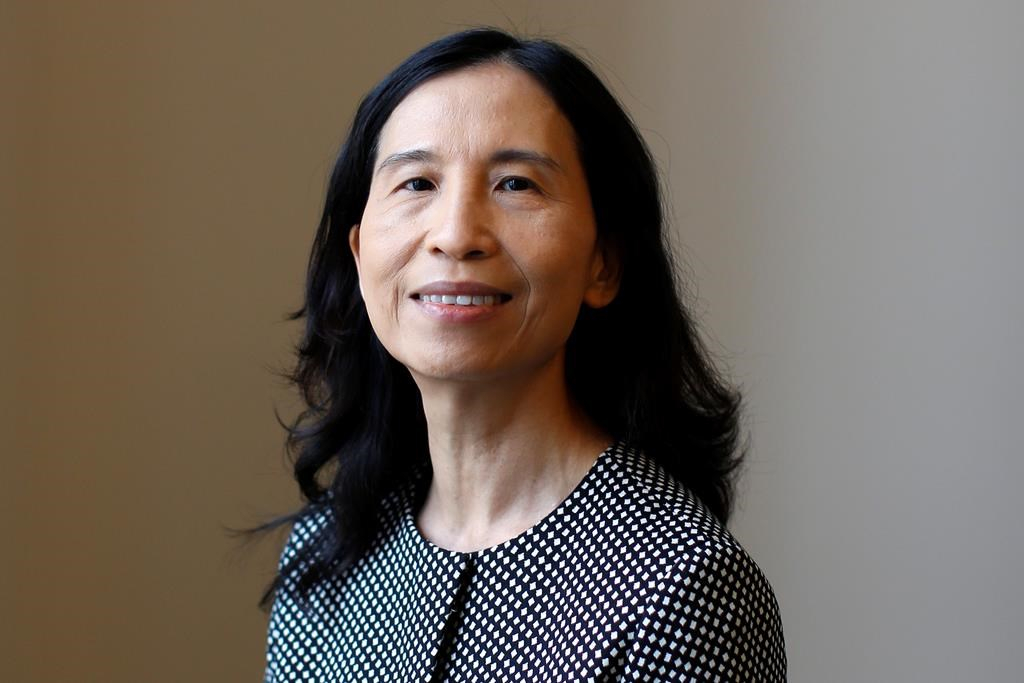 Chief Public Health Officer Dr. Theresa Tam stands for a portrait after a press conference in the Sir John A. Macdonald Building in Ottawa on Friday, Dec. 11, 2020. File photo by The Canadian Press/David Kawai
Previous story
Next story

Canada's top public health officer has been a model of stoicism through the first year of COVID-19, but Dr. Theresa Tam still got a little choked up last week when the first Canadians were inoculated with a COVID-19 vaccine.

"That was pretty emotional," said Tam, in an interview reflecting back on the year many would like to forget.

"I think everyone was touched by those images."

It has been just 355 days since Tam saw the first emails warning of a pneumonia cluster in the Chinese city of Wuhan that had no known origin. Within a week those infections were connected to a novel coronavirus, which causes what we now know as COVID-19.

In a year-end interview with The Canadian Press, Tam said she is in awe that the world was able to develop, test, produce, ship and now inject a vaccine less than a year later.

"That's never been seen before in the history of public health," she said. "So I think it is emotional for the perspective of just, just that alone how incredible a scientific achievement that was."

Last spring, when vaccine development efforts were well underway, most experts warned it would be a year to 18 months before one was ready, if we were lucky. Instead, massive investments from governments and the private sector pushed the development, testing and review process forward at lightning speed.

Dr. Supriya Sharma, the chief medical adviser at Health Canada, said very early on, Health Canada began talking to regulators in other countries about the standards they should all use, including if any steps could be skipped to make things go faster.

"The answer to that was no," said Sharma.

The international regulators worked "really, really early" to harmonize standards and let companies know what was expected of a vaccine. Health Canada adjusted the rules to allow its first reviews to happen while the final trials were ongoing, instead of after. Review teams were enlarged, they worked seven days a week and the companies kept their experts on constant standby to answer questions

That all paved the way for Health Canada to complete its review of Pfizer-BioNTech's vaccine candidate just five days after receiving the final documents from the company. Moderna, which was to submit its final documents Friday, is expected to follow a similar timeline. Together those two vaccines alone should bring enough doses to Canada to vaccinate 30 million people next year.

Prime Minister Justin Trudeau told The Canadian Press last week that Canada moved early to identify and pre-purchase multiple promising vaccines because it had learned its lesson when it didn't have enough personal protective equipment for front-line workers when the pandemic began.

"One of the things we told ourselves in April and May was we didn't want to ever have to go through that again, this fight with the global community over what we needed," Trudeau said.

Canada was able to adapt domestic factories to start churning out ventilators, face masks and hand sanitizer pretty quickly. Ramping up vaccine development and manufacturing capacity is going to take a lot longer. It is one of the gaping holes in Canada's preparedness laid bare by COVID-19, and has put some other countries on track to vaccinate their entire populations a little bit faster.

The United States, which invested at least US$18 billion to develop and procure vaccines through its Operation Warp Speed program, has multiple companies making vaccines and is likely to get enough doses to vaccinate most of its 328 million people a few months ahead of Canada's promise to vaccinate its population of 38 million.

Tam calls this "the pandemic of the century" and said while there are many lessons to help guide future pandemic planning, every virus is different. She was alarmed by the email warnings in December, because they sounded a lot like the 2003 outbreak of severe acute respiratory syndrome, or SARS.

But unlike SARS, which had a death rate above 10 per cent, COVID-19 proved to be milder in most patients, and infectious before symptoms ever appear, allowing it to spread faster and more widely.

Early advice that people without symptoms didn't need to wear masks proved to be a mistake. Tam bristles a little when asked about it.

"Just to, again, try and set the record straight," she says, people with symptoms were always told to wear masks. As soon as there was evidence the virus was spreading from people without symptoms, the advice started to change.

Canada also made a mistake focusing mostly on travellers who had been in China early on. Genetic tracing of the virus, said Tam, shows cases that spread in Canada mostly originated in people coming from Europe and the United States.

Still, she says the measures taken for this pandemic, the wide-scale lockdowns and the closure of the U.S.-Canada border to non-essential travel, were not in the playbook.

"When in the history of the world have we seen this?" Tam says. "When have we restricted the Canada-U.S. border? It's really rather extraordinary times and measures."

For Tam the vaccines represent hope, but what keeps her up at night is the fear that not enough people will take them. She says communicating the vaccines' success to date, telling the stories of those who have had them, and encouraging people to look for credible information about them, are going to be the big focus as 2021 gets underway. And she said, she feels very optimistic that 2021 will be better.

Trudeau in November summed up the feelings of many when he said living in a pandemic "sucks." In a year-end interview with The Canadian Press last week, he said if we can just hold on a little longer, keep following public health advice, and trust the science to get the vaccines, better is just a few months away.