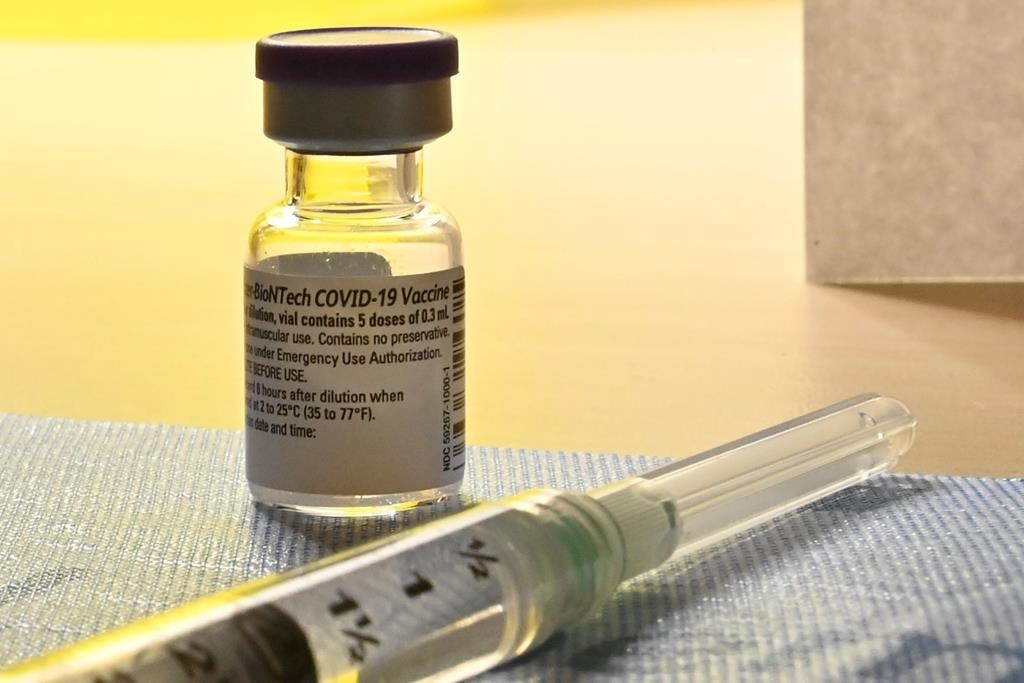 A syringe of the COVID-19 vaccine waits to be administered in Toronto on Monday, Dec. 14, 2020. Photo by The Canadian Press/Frank Gunn
Previous story
Next story

The chief medical adviser at Health Canada says things are on track for her department to approve a second vaccine for COVID-19 very soon.

Dr. Supriya Sharma says things "look positive" for the vaccine from U.S. biotech firm Moderna but there are still some outstanding manufacturing documents needed before the decision can be made.

Health care workers in Toronto and long-term care residents in Montreal and Quebec City were the first to receive the vaccine Monday morning.

Long-term care workers from an Ottawa care home will be next, as that city rolls out its vaccination program this morning.

Health workers in Manitoba and Alberta are set to follow Wednesday and most other provinces intend to start vaccinating priority groups by the weekend.

The Pfizer-BioNTech vaccine has also been approved in several other countries including the United Kingdom, the United States, Bahrain and Saudi Arabia.

The U.S. Food and Drug Administration is to meet Dec. 17 to discuss Moderna's application. Health Canada has been reviewing Moderna's vaccine since October, and Sharma said the final clinical data was provided from the company Friday.

She said the review team spent the weekend poring over those documents, and now all that is left is data on the manufacturing plants. Those documents are expected by week's end and then she'll know better when the Moderna decision can be issued.

Sharma said that means there is more uncertainty about how long it might take to go over the data, though it's possible the Moderna timeline could be similar to Pfizer's.

Health Canada's review team uses experts in a variety of areas, from toxicology and pharmacology to infectious diseases and manufacturing practices.

AstraZeneca was first to submit an application but its vaccine's review was affected when the company realized some patients in the clinical trial had not been given full doses of the vaccine.

Sharma said because of that problem, Health Canada is still reviewing data to decide if it will ask the company to complete more studies. She said other international partners are undergoing the same process currently.

Johnson & Johnson only submitted its application two weeks ago for Canadian approval and the teams are conducting preliminary reviews now.

Pfizer and Moderna together are expected to deliver 60 million doses of vaccine to Canada by next fall, enough to vaccinate 30 million people.

Canada has procured doses of three other vaccines but none of their makers have yet applied for approval.

Procurement Minister Anita Anand said Monday she anticipates getting 30,000 Pfizer doses this week and a similar shipment next week. The federal government has said about 249,000 doses will arrive by the end of the month.

Both Pfizer's and Moderna's vaccines require two doses — 21 days apart for Pfizer and 28 days apart for Moderna. However Pfizer's has much stricter cold-chain requirements that are restricting the places it can be delivered at the moment.

Moderna's vaccine can survive in regular freezers and it will be prioritized for delivery to the territories, remote Indigenous communities and long-term care sites.

Sharma said with the Pfizer vaccine, a recipient's immune system generates some protection after the first dose, with maximum immunity in place seven days after the second dose.

Enough doses are to start arriving in April for provinces to expand the vaccination program beyond the initial priority groups. Canada expects to be able to vaccinate every Canadian who wants an inoculation by the end of September 2021.

Authorities are still calling on Canadians to keep apart, wear face masks and practise careful hygiene to keep the virus that causes the illness from spreading.