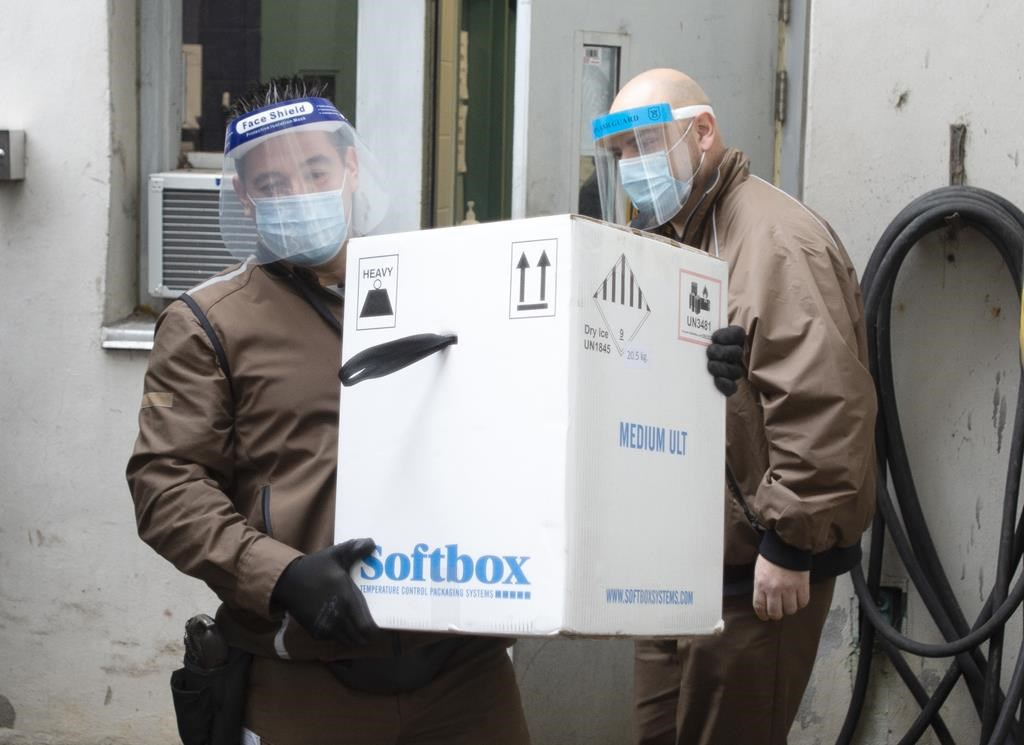 The first doses of the Pfizer-BioNTech COVID-19 vaccine are delivered to the Maimonides CHSLD, Monday, December 14, 2020 in Montreal. Photo by: Ryan Remiorz
Previous story
Next story

Lallouz, the first person to receive the Pfizer-BioNTech vaccine in Montreal, said the stakes couldn't be higher.

"It’s my life," Lallouz told reporters outside the long-term care home, which received the first batches of the vaccine Monday morning. "It gives me the opportunity to see my family, to see my friends.

"We're not going to be able to live properly until everybody gets a vaccination."

Provincial health officials began distributing the Pfizer-BioNTech vaccine to residents and staff at Maimonides and at a Quebec City long-term care home after receiving a shipment Sunday night.

Gisele Levesque, an 89-year-old resident of the Saint-Antoine residence in the provincial capital, was the first Quebecer to receive a COVID-19 vaccination, Premier Francois Legault said Monday.

Levesque's nieces said in a news release Sunday their aunt was calm and direct about being number one on the list. Levesque said, "I was chosen, of course," according to her nieces.

Speaking outside Maimonides Monday, Quebec Health Minister Christian Dube said it was "a very, very big day" for the province. He said Levesque had received her vaccine at 11:30 a.m., making her the first in Canada to get the shot.

"It's a big, historic day for Quebec," Dube added. "You know, they say that it's a big marathon that we've been doing for nine months. We're starting to see … the light at the end of the tunnel."

Speaking alongside Dube, federal Health Minister Patty Hajdu said she was emotional seeing the first people get vaccinated. "I see this as the first step forward into the light," Hajdu said.

"It gives me the opportunity to see my family, to see my friends," says Gloria Lallouz, the first person in Quebec to receive a #COVID-19 #vaccination. #Quebec

The Quebec City health authority said it received 3,000 doses Monday morning and that 220 Saint-Antoine residents and 400 staff will be the first vaccinated.

In Montreal, Francine Dupuis, associate CEO of the regional health authority that oversees Maimonides, said the agency expected to receive 1,950 initial doses, which will first go to Maimonides residents and staff and then to health-care workers in other long-term care homes.

A few hundred residents of Maimonides had given consent to be vaccinated, Dupuis said. "The important thing is not to lose any doses and to take into consideration the fact that we can't move the vaccine," she said. "We won't lose any doses."

Health officials are hoping the vaccine will help protect the most vulnerable people in the province and bring the pandemic under control.

Kitra Cahana's father, 67-year-old Rabbi Ronnie Cahana, has lived at Maimonides since 2012, following a brain-stem stroke that left him quadriplegic. She said she wasn't sure whether her father would receive the vaccine on Monday or Tuesday, but that the family was "so thrilled" to see the vaccinations begin.

Kitra said a recent COVID-19 outbreak at Maimonides had been extremely stressful. "It really felt like the building was on fire and my father was in the middle of it and there was no way to rescue him," she said in an interview. "To hear that he's going to get vaccinated, it really feels like a little bit of light in the darkness."

That sense of relief was shared by Brenda Sachin, whose mother, Mildred, is a resident at Maimonides. Sachin said she was happy the facility was among the first places to get the vaccine. But she said she will worry about residents during the 21-day period between when they receive the first and second doses of the vaccine.

She also said she had concerns some staff members would not get vaccinated. "I know there's some that absolutely will, but there's always going to be people that won't get vaccinated," Sachin said. "The quicker everybody gets vaccinate, the more relaxed we will all be."

The first vaccines were distributed as Quebec reported 1,620 new COVID-19 cases Monday and 25 more deaths linked to the novel coronavirus. The province has reported a total of 165,535 infections and 7,533 deaths since the pandemic began.

The regions with the most new cases were Montreal with 552; the Quebec City area with 198; and Monteregie, south of Montreal, with 182. Hospitalizations increased by 10 over the past 24 hours for a total of 890. Of those, 122 people were in intensive care, a drop of one from the previous day.

Montreal Mayor Valerie Plante tweeted Monday morning that the vaccine's arrival is "excellent news," but cautioned that people need to remain vigilant and follow public health guidelines. "The start of vaccinations is only a first step toward getting back to normal," she said.

Quebec is expected to announce new COVID-related restrictions this week. In an interview on Montreal radio station 98.5 FM Monday, Legault said the holiday period presents an opportunity to get the pandemic under control.

But, he said, his government won't go as far in closing the province as it did during the first wave in the spring.