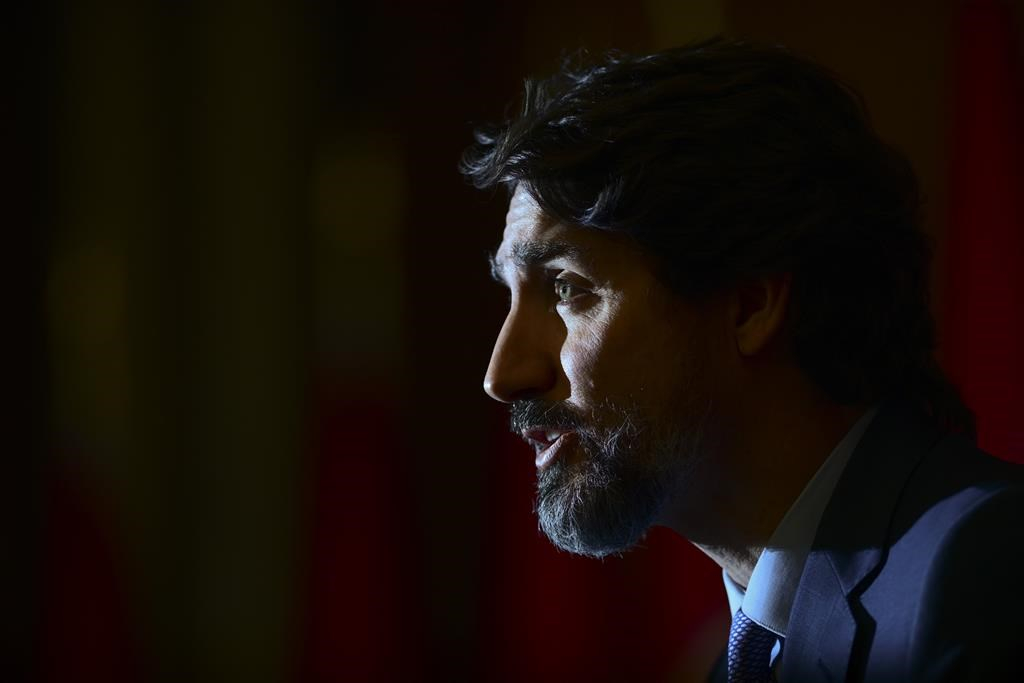 Prime Minister Justin Trudeau takes part in an update on the COVID-19 pandemic in Ottawa on Tuesday, Dec. 15, 2020. File photo by The Canadian Press/Sean Kilpatrick
Previous story
Next story

The federal government is restricting travel from the U.K. for 72 hours in an effort to keep a contagious new strain of the virus that causes COVID-19 out of Canada.

"We focused on the new variant of COVID-19 identified in the U.K., and we have decided to implement new border restrictions in order to keep you — and people right across the country — safe," he wrote on Sunday evening.

At midnight tonight, and for the next 72 hours, all flights from the UK will be prohibited from entering Canada. Passengers who arrived today are subject to secondary screening and enhanced measures. More on the actions we’re taking to protect you: https://t.co/UrsE5sTcJT

He added that passengers who arrived in Canada from the U.K. on Sunday will be subject to secondary screening and "enhanced measures."

Those measures include increased scrutiny of quarantine plans, Health Canada said in a statement.

"The Government of Canada is closely monitoring the genetic variant of the virus that causes COVID-19 identified in the United Kingdom and is working with international partners, including the World Health Organization, to better understand this variant and its impacts," the agency said.

While the early science suggests the new variant is more transmissible than other strains, Health Canada said there's nothing at this point suggesting that the mutations have any effect on symptom severity, antibody response or vaccine efficacy.

It added that there have been no recorded cases of the new strain in Canada.

The travel ban doesn't apply to cargo flights or stops where passengers do not disembark, according to a Notice to Airmen issued Sunday evening.

Feds impose 72-hour ban on travel from the #UK hoping to stop an even more contagious new strain of the virus that causes #COVID19 out of Canada. #coronavirus #stayhome

Several European countries announced earlier that they would close their borders to the U.K. as British officials struggle to contain the new strain of the novel coronavirus, which has been blamed on a genetic mutation.

The list includes France, Belgium and the Netherlands, which have expressed concerns about the new strain leading a similar surge in their own countries and overwhelming health-care systems that are already struggling with the pandemic.

Those travel bans follow British Prime Minister Boris Johnson's announcement that Christmas shopping and gatherings in southern England must be cancelled because of rapidly spreading infections blamed on the new coronavirus variant.

The new strain is wreaking havoc on the U.K., accounting for 60 per cent of new infections in London in December. The country recorded 35,928 further confirmed cases on Sunday, around double the number from a week earlier.

Viruses mutate regularly, and scientists have found thousands of different mutations among samples of the virus causing COVID-19. Many of these changes have no effect on how easily the virus spreads or how severe symptoms are.

The British government has said the strain has been circulating since September, but it wasn’t until the last week that there was enough evidence to declare that it has higher transmissibility than other circulating coronaviruses.

Before Trudeau met with his cabinet ministers, Bloc Québécois Leader Yves-Francois Blanchet called on the government to follow Europe’s lead and impose a travel ban on Britain to prevent the strain from reaching Canada.

“It will be several months before the pandemic is contained, especially with the number of (vaccine) doses available remains far too small,” Blanchet said in a statement released in French.

“If a variant of COVID-19 were to spread with increased speed among vulnerable people, the effects could be devastating on people's health as well as on the health-care system and staff already under tremendous pressure.”

NDP Leader Jagmeet Singh made the same call on Twitter, writing: "With vaccines still very rare, if this new strain gets loose here in vulnerable populations, it will be a disaster."

We can’t afford to wait.

With vaccines still very rare, if this new strain gets loose here in vulnerable populations, it will be a disaster.

We need more information, but until we know more, flights from the UK need to be suspended. https://t.co/PHRdc4c8jy

Conservative health critic Michelle Rempel Garner demanded the government provide more information about what it knows about the new strain and what it is doing to address it.

"If the Trudeau government is considering a similar travel ban, they need to clearly communicate this to Canadians and their rationale for doing so as soon as possible," Rempel Garner said in a statement.

"Canadians deserve certainty and clarity from the Trudeau government."