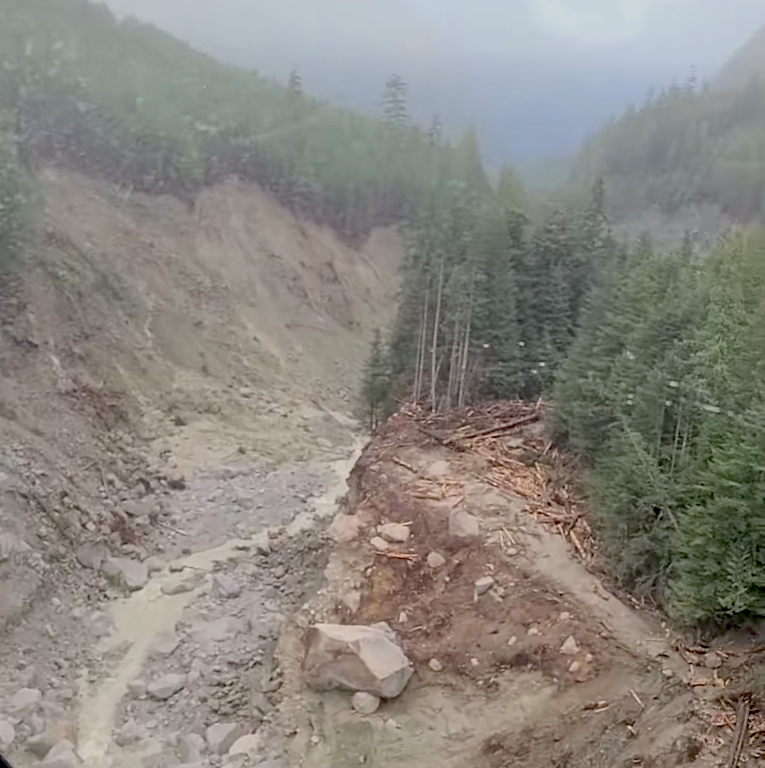 Bastian Fleury, a pilot with 49 North Helicopters, surveyed the damage from a massive landslide near Bute Inlet that scientists are just beginning to investigate. Screenshot courtesy of Bastian Fleury
Previous story
Next story

Environmental impacts from millions of tonnes of earth and water sluicing down a valley and spilling into the ocean are just beginning to be understood, say scientists studying a massive landslide in the Bute Inlet watershed.

Climate change set the stage for the slide that occurred on the morning of Nov. 28, according to Brent Ward, a geologist at Simon Fraser University.

A retreating glacier northeast of the head of Bute Inlet left a mountain slope above Elliot Creek unstable, said Ward, who is also co-director for SFU’s Centre for Natural Hazards Research.

A section of the mountain — normally secured by the glacier and located above an older slide — came loose, plunging six to seven million cubic metres of rock and earth into a glacial lake at the head of the creek, Ward said.

A displacement wave likely 100 metres high resulted — sending a wall of water down the length of the lake and creek, carving out channels for about 15 kilometres along the valley bottom and taking a raft of trees, rocks and earth with it.

All the debris and water fanned out when it collided with the Southgate River valley, which, in turn, continued to drain into Bute Inlet, Ward said.

Most of the slide’s devastation was the result of the wave pushing out of the lake, which grew at the bottom of the mountain as the glacier melted, Ward said.

“Because of climate change and the fact the glacier pulled back, a lake formed there,” he said, adding if the landslide had occurred in the past, it would have just fallen onto the glacier and stayed put.

“We probably wouldn't have even noticed it, but because of the lake, it triggered this big wave, and it's had a huge effect on the fishery and wildlife in the area,” Ward said.

Climate change set the stage for a massive landslide in B.C.'s Bute Inlet that has devastated the area's fishery and wildlife, says geologist Brent Ward. #climatechange

Pilot Bastian Fleury, with 49 North Helicopters based in Campbell River, was one of the first to survey and get footage of the slide’s devastation from the air.

Fleury returned to the area again last Thursday to get images of where the slide originated close to the glacier.

The slide’s torrent has totally decimated the coho and chum spawning grounds along Elliot Creek and on the Southgate River downward from the slide.

“We were able to fly in because it was clear, and we could see the lake was totally gone,” said Blaney, adding the Homalco Nation’s food security will take a hit with the washout of the salmon beds.

“I’m just hoping some chum have spawned further up (the Southgate River) and the eggs have survived,” he said.

The grizzly bears dependent on the salmon runs in Bute Inlet are a concern, Blaney added.

But hopefully the bears will be able to find enough food along the nearby Homathko River, or even travel to the neighbouring Toba Inlet in search of salmon, he added.

Nice summary of the Elliot Creek landslide! Thanks @davepetley https://t.co/7ANUjY4zXb

The landslide is a particularly interesting event and one numerous researchers are still investigating, said Andrew Schaeffer, a Pacific division seismologist with the Geological Survey of Canada.

Over a seven-hour period, there were at least three earthquakes ranging between 2.1 and 2.3 in magnitude not far from where the landslide occurred, Schaeffer said.

The last happened at 6:52 a.m., about 20 to 40 seconds before the landslide, which itself was picked up by both Canadian and U.S. seismic stations, he said.

The massive landslide didn’t register exactly as an earthquake would, but it sent out low-frequency surface waves resembling those of a quake with an equivalent magnitude of 4.9, Schaeffer said.

“But if this had actually been a 4.9-magnitude earthquake, the residents of Campbell River, Quadra Island and some of the inside coast of Vancouver Island may have felt the shaking,” he said.

It’s not entirely clear if the earthquakes triggered the landslide, Schaeffer said, adding it’s believed magnitude-4 earthquakes or greater can cause landslides.

“This is a subject of active, ongoing research in regards to this event,” he said.

Jennifer Jackson, an oceanography researcher with the Hakai Institute, said the glacial slide had an immediate and dramatic cooling effect on deeper water in Bute Inlet.

But the landslide was so massive, it immediately caused half a degree of cooling in deep water below 350 metres, Jackson said.

“We've never really seen anything like that,” she said.

“If we hadn't known that there was a slide, we might have just dismissed it and thought our data was wrong.”

Additionally, a huge amount of sediment came down into the inlet and is bound to change its nutrient ratios and impact the marine food web in the region, she said.

“We also did see changes in oxygen and the pH levels, but we'll still have to piece together what that means for the food web,” Jackson said.

“The second big thing that we've seen on the ocean data is that there was a massive turbidity current,” Jackson said, adding the current is found 250 metres below the ocean’s surface.

These current flows have increased density due to high amounts of sediment triggered by geological disturbances.

The turbidity current caused by the slide travelled as far as 65 kilometres from the mouth of the Southgate River down the inlet and was an incredible 400 metres thick, Jackson said.

“Normal turbidity currents in Bute Inlet would be about 25 metres thick,” she said.

The ripple effects in both the marine and terrestrial environment are going to take some time to piece together, Jackson said.

However, it’s clear retreating glaciers were a factor in the landslide, which should raise concern for any coastal communities that could be at increased risk of natural disasters triggered by climate change, Jackson said.

“I think it’s a really good time to think about the vulnerability of these communities to similar events.”