Isolation and the fear of dying alone 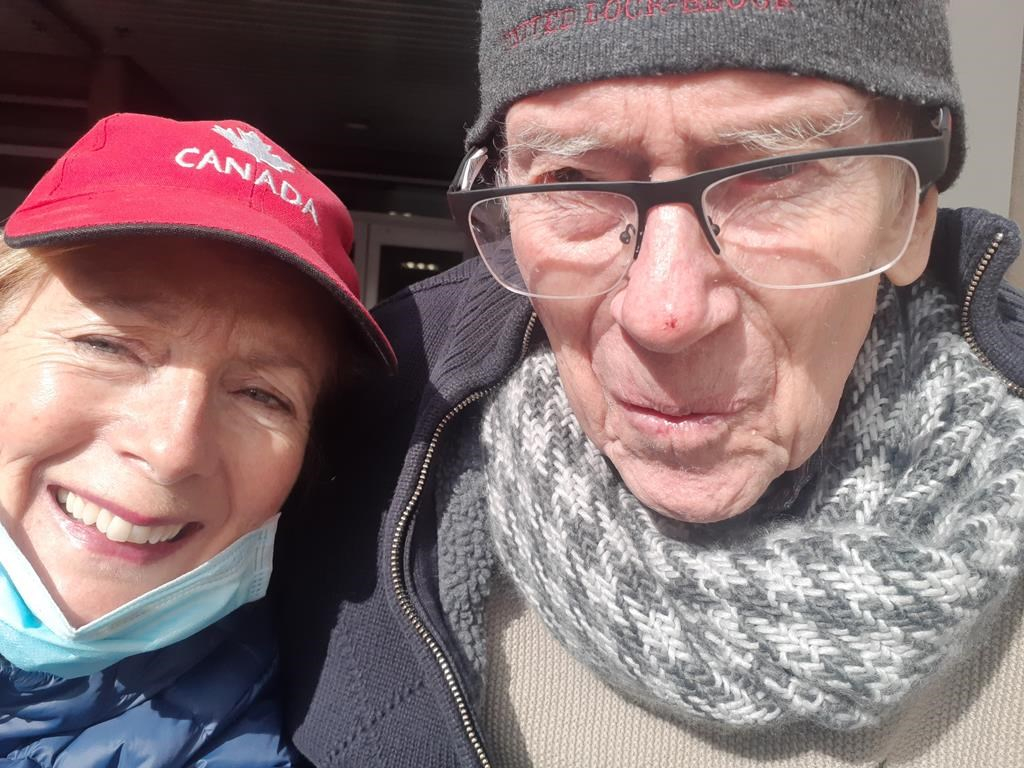 Debbie Drew poses for a photo with her father Graham Drew during her visit to a long-term care home in British Columbia in this undated handout photo. Handout photo by Debbie Drew
Previous story

A plastic barrier sits on a table between Debbie Drew and her father during their visits in the reception area of a long-term care home where the first Canadian died of COVID-19.

Nine months later, Drew said visiting restrictions that were initially needed at facilities like the Lynn Valley Care Centre are now causing more harm than good for her dad and other residents who are mostly confined to their rooms.

That's where she fears 96-year-old Graham Drew will die alone.

"It's very hard because he's getting depressed. He's sad. He needs the socialization because he's been a very social person all his life," Drew said of the man known for his sense of humour and love of singing songs like "Take Me Out to the Ball Game."

The National Institute on Ageing said families in British Columbia are enduring the most restrictive visitation policies compared with long-term care homes anywhere else in the country. The institute has issued guidelines to support the reopening of care homes to family caregivers and visitors, even during outbreaks.

Drew said she and her sister and brother regularly visited their father since he moved to the care home three years ago. They decided she would be the so-called designated visitor allowed to enter a common area once a week for 30 minutes though the Plexiglas barrier separating her from her father makes visits challenging because of his hearing loss.

Isobel Mackenzie, the advocate for seniors in British Columbia, said the unintended consequences of tightened visiting policies have contributed to a spike in loneliness and depression for residents, as revealed in a survey by her office. About 15,000 residents, families and members of the public participated in the survey this summer.

The findings released last month show a seven per cent rate of increase in antipsychotic use, and a three per cent jump in antidepressant use between March and September for residents who have struggled to cope without adequate contact with their family caregivers.

The lack of an association that represents residents and their families at the 300 care homes in B.C. means they don't have a voice in policy discussions between the government, care-home operators and unions for staff, she said.

Mackenzie has called on the B.C. government to establish a family council association, similar to one in Ontario, that would be included in future consultations on issues affecting residents of long-term care and assisted living facilities.

A plastic barrier sits on a table between Debbie Drew and her father during their visits in the reception area of a long-term care home where the first Canadian died of #COVID19. #seniors #LongTermCare #cdnhealth #depression

The Health Ministry did not respond directly to an inquiry about whether it would consider the creation of such an association, saying only that it recognizes the important role of family councils that exist at licensed facilities.

Not all care homes have councils, and those that do aren't part of any collective group.

Mackenzie said care home operators are arbitrarily deciding who qualifies as an essential or designated visitor, with many facilities allowing only one or the other among regular family caregivers.

Dr. Bonnie Henry, the provincial health officer for B.C., said she understands the ongoing challenges families are facing when trying to visit their loved ones during a pandemic that has caused a disproportionate number of deaths among long-term care residents.

"We've been quite clear on what an essential visitor is and recognize the importance of essential visitors and have been working to ensure that the guidance is applied appropriately and consistently," she said.

Families have the right to appeal any decision to the manager of a facility and to the BC Patient Safety and Quality Council, Henry said.

Mackenzie said about 80 per cent of residents had no visits between March and June as care-home operators decided whether they met the criteria for an essential visit.

"Certainly, as we got into the summer months, we had far more restrictions in B.C. than any of the other provinces."

At the very least, care homes should permit one visitor to see residents in their room, something that is not happening at most facilities, Mackenzie said.

"I've run a care home. I can't imagine the nightmare of having to co-ordinate visits in a common area," she said.

Dr. Samir Sinha, director of geriatrics at Sinai Health System and the University Health Network in Toronto, said the impact of visitor restrictions on long-term care residents whose family caregivers are a big part of their lives has been lost amid the focus on daily COVID-19 case counts.

"How many families are we putting in extreme distress and turmoil? How many residents are we actually making suffer even more because of overly excessive kinds of restrictions?"

Sinha, who is also director of health policy research at the National Institute on Ageing at Ryerson University in Toronto, said restricted access to visiting, especially in B.C., has not always balanced the risks of COVID-19 infection with the risks of social isolation.

The need for that balance is one of the principles in the institute's guideline, which says all long-term care residents should be given the same access to visitors.

That's all the more important due to chronic staffing shortages that have been highlighted during the pandemic, Sinha said.

"If we do it in certain ways, we should be able to facilitate a lot more visits and a lot higher level of socialization because a lot of older people are literally dying of loneliness, and that's the biggest travesty of all."

This report by The Canadian Press was first published Dec. 27, 2020.