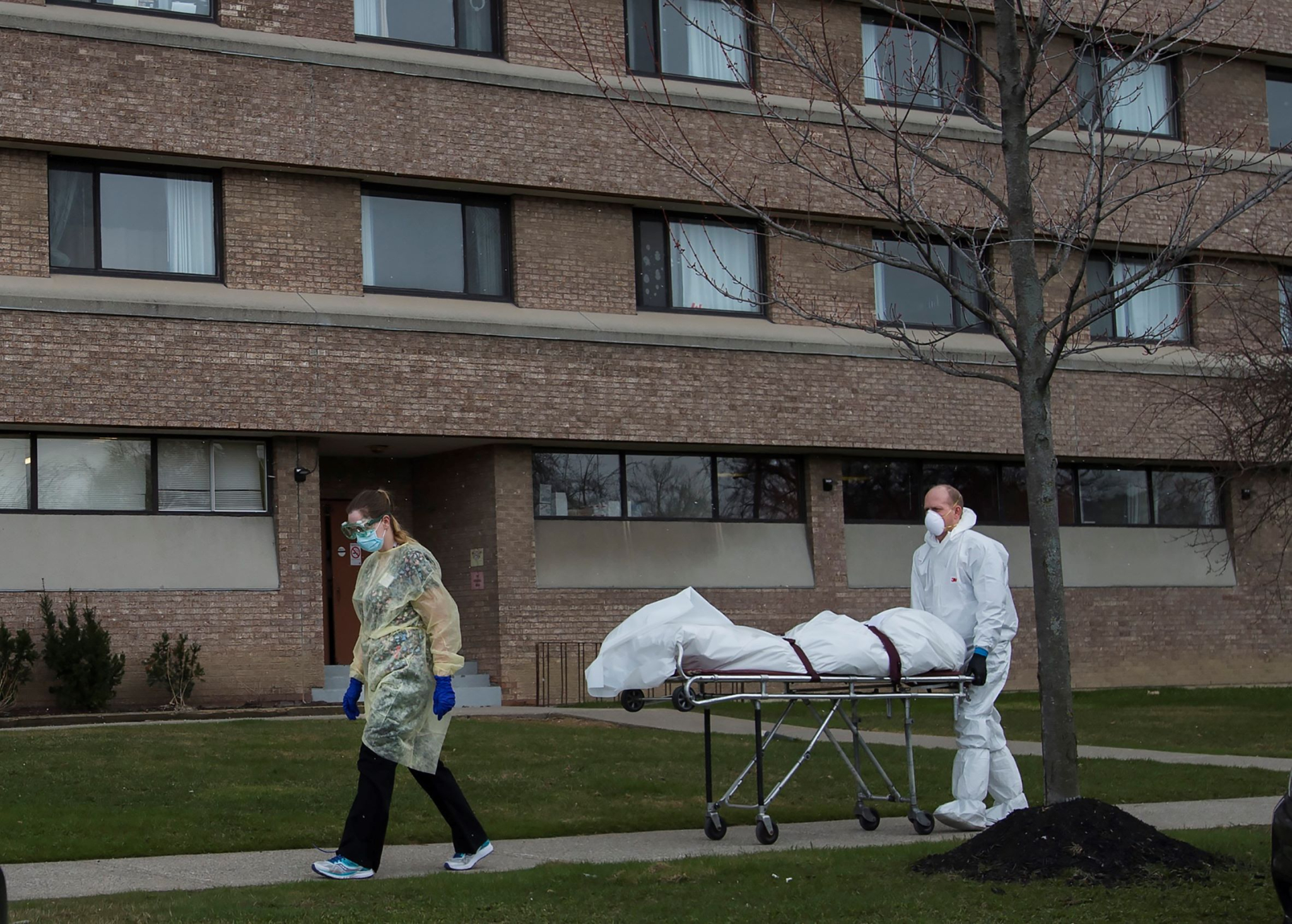 A body is wheeled from the Eatonville Care Centre, where multiple deaths from COVID-19 have occurred, in Toronto on Tuesday, April 14, 2020. The Canadian Press / Nathan Denette
Previous story
Next story

Rooms infested with cockroaches and contaminated with feces.

Patients force-fed to the point of choking.

Staff afraid to use vital supplies and personal protective equipment “because they cost money.”

People with COVID-19 allowed to wander from room to room.

Residents bullied, sedated and left alone for hours as they cried for help.

When Canadian Armed Forces personnel entered five Ontario long-term care homes that had been struck by COVID-19 earlier this month, they found a litany of horrors and abuses, a disturbing military report made public Tuesday alleges.

“Reading this report was the hardest thing I’ve done as premier.”

“I was sad. I was shocked. I was disappointed. I was angry,” Trudeau said.

“I believe we are talking about a situation that clearly is a reality associated with COVID-19, but has also existed for quite some time.”

Ford said the province has launched an investigation into the situation at the homes, and criminal charges could be laid. Fourteen military members working at homes in Ontario have tested positive with COVID-19.

Here’s what you need to know about the report’s findings and what will happen next.

A 'crisis situation' inside nursing homes

The report details abuses inside five long-term care homes that have been among the hardest-hit by the novel coronavirus: Orchard Villa in Pickering (77 deaths), Altamont in the Scarborough area of Toronto (52 deaths), Eatonville in the Etobicoke area of Toronto (42 deaths), Hawthorne in Toronto’s North York (43 deaths) and Holland Christian in Brampton (11 deaths).

Ford, who said the findings described a “crisis situation,” called for military assistance in the five homes on April 22. Roughly 250 Canadian Armed Forces members ⁠— including nurses, medics and general personnel ⁠— were deployed in early May.

The report is based on what personnel saw during their first two weeks. National Observer has not independently confirmed the allegations in the report, and none of the five long-term care homes responded to requests for comment, save Altamont.

In an emailed statement, Altamont's operator, Sienna Senior Living, said it has already increased staffing levels and slowed the rate of new infections in its facility.

"To deliver the level of care that our seniors deserve, the staffing challenges we face in the long-term care sector must be addressed," the statement said. "We are committed to working with the government, and our health system partners, to solve this urgent issue."

Though the Armed Forces were not originally tasked with writing a report, military brass decided it was necessary, Ontario officials said Tuesday. Dated May 14, the report was sent to the Ontario government Sunday.

All five homes faced staffing shortages and failed to meet basic standards of care for their patients. In some cases, military personnel reported they were concerned that the homes would not be able to care for patients if they left (Ford has requested an extension on the military help).

Ford also said he believes that similar problems likely exist at other long-term care homes in the province. In a background briefing for reporters, government officials said the situation at the homes was stabilizing, though four of them had been asked to produce plans for how they would move forward.

Here’s a list of some of what the report found:

Whose fault is this?

On Tuesday, Ford said he took full responsibility for the neglect and abuses documented in the military report. He also repeatedly said he “inherited” a broken system, and vowed to “move heaven and earth” to fix it, no matter the cost.

Ontario’s long-term care system has been underfunded and has faced staffing shortages for decades. Systemic issues came to light in 2019, after an inquiry prompted by serial killer Elizabeth Wettlaufer, a long-term-care nurse who murdered eight elderly patients.

Advocates have been pushing for government action on the issues for years, even before the Wettlaufer inquiry. Now, COVID-19 has ravaged long-term care, spreading like wildfire to infect staff and vulnerable elderly patients who are especially susceptible to the virus.

On Tuesday, Fullerton said her ministry had been working to address issues raised in the Wettlaufer inquiry. And Ford said he believed the Progressive Conservative government had done well to act when it did.

“I don’t feel our government failed seniors,” he said. “Matter of fact, we saved a lot of lives by doing what we did.”

But critics said the Ford government worsened conditions in long-term care and contributed to the crisis.

Issues and complaints had been reported at several of the five homes in the military report, government officials told reporters in a background briefing.

The government also cut $34 million from its long-term care budget last year, and the Ontario NDP and health care groups have said the government did not act quickly enough to stop long-term care staff from working at multiple facilities and potentially spreading the virus.

The Ontario Health Coalition, which has raised issues with long-term care for years, said Tuesday that it was “frustrated.”

“Shortages of PPE and incompetent and negligent management are compounded by the leadership failure in our provincial government,” said executive director Natalie Mehra in a statement.

“Thousands of staff and residents alike have been infected with COVID-19, almost 1,500 residents and staff have died, yet we are still waiting for a coherent, coordinated plan from Ontario’s government to intervene actively in long-term care homes with outbreaks.”

The Ontario government also failed to take advantage of a pool of nurses available to work in long-term care before calling in the military, National Observer previously reported. The Registered Nurses' Association of Ontario had assembled lists of qualified staff that were ready to go into long-term care, and may have better suited to it than military personnel without nursing home experience.

Doris Grinspun, CEO of the RNAO, said in an interview Tuesday that she was aware of issues at one of the homes, Orchard Villa, more than a week before the military was called in. No one was answering the phone when she called to ask about giving them nursing resources, she said. (Orchard Villa did not respond to a request for a response.)

“This could have been fixed before the military if the government would have listened to the RNAO,” she said.

Grinspun also said the government should have acted weeks before it did to bring extra help into long-term care.

Others have pointed to issues with privately owned long-term care homes, where residents are far more likely to die of COVID-19 than they are at not-for-profit homes, the Toronto Star found. Three of the largest operators in Ontario have paid out $1.5 billion in dividends to shareholders over the last decade, the Star reported. And three for-profit long-term care companies in Ontario have hired lobbyists with Conservative ties.

Four of the five homes examined in the military report were privately owned, but it’s not clear whether that played a role in what happened, Ontario officials said Tuesday.

Ontario’s chief coroner is investigating one death at Orchard Villa. And on Tuesday, Ford said the province had opened an investigation into the situation at the homes.

“The results of these investigations will be shared with police to look into any criminal charges,” he said.

A week ago, Ford announced the province would hold an independent public commission in September to examine how COVID-19 had struck long-term care. On Tuesday, critics renewed calls for that to be expanded to a public inquiry, which would give the government less control and influence over the process ⁠— and Ford said that idea is now on the table.

Grinspun said the government needs to make immediate changes to fix the problems at long-term care homes, and it cannot wait for the results of a commission or inquiry.

Fullerton said Tuesday that inspectors from the Ministry of Long-Term Care will immediately begin investigating all the incidents detailed in the reports.

When a reporter asked Ford Tuesday whether anyone in his government will have to resign as a result of the report’s findings, Ford did not directly answer the question.

At the outbreak’s peak, 190 long-term care homes in Ontario reported outbreaks of COVID-19. That number has since dropped to 150.

Editor's Note: This story was updated at 7:59 p.m. Eastern to include comments from Sienna Senior Living.

what to add? Where is the

what to add? Where is the governance rather than ass covering. I have a sense that Ford is in over his ability to govern, to recruit creative competent problem solvers.

Why not assign a swat team from a regional hospital for infection control training to every LTC in the province to train up staff, why not call in the volunteer nurses (2-3000 ) ???

Willful neglect is the obvious observation. Shame on them acting like 12 year olds caught torturing the family cat. oh so outraged now but how could they not know the degree of criminal neglect????

Will the Westray Law be used to criminally charge any CEO and jail him (eg. Mike Harris?)
We are all watching I hope and will not look away again

I really love the subtle

I really love the subtle distinctions made by governments when announcing investigations into failures, wrondoing, malfeasance and the varied and sundry other ways of describing human incompetence. We have Royal commissionis, "common" commissions and inquiries of allsorts.... As always the devil is in the details - things like scope, definitions, summoning/subpoena powers, reporting requirements, timelines, etc.

Two provinces in this country account for the majority of long term care residents' deaths. Both provinces, based on the outbreaks of various scandals, have long histories of failures in the care of institutionalized elderly. There are serious concerns about the entire process of institutionalization as opposed to home care. We can examine the failures of institutionalizing people, and apply bandaids as required. Or, we can re-think the entire social phenomenon of family, and governance disfunction.

Covid 19 may well be an excellent reason for looking seriously at the multiple fissures the pandemic has uncovered in the developed world's social and economic organization. If we have the courage to do THAT, we just might have the smarts to alter the course of human destructiveness. and likely extinction.

Report like this is long overdue. One concern I have is the report landed on the Federal ministers desk roughly 10 days before Prime Minister Trudeau became aware of it (timing is based on media reports). This raises the question why did it take so long to rise to the surface. Government bureaucratize may be part of the reason. To the Prime Ministers credit he acted swiftly to start some action on same by contacting Premier Ford immediately. Calling the Military in for help has proven to be a good decision, otherwise, it is unlikely the coverage would have been this good. All do respect to the RNA, I suspect a report from them (as indicated by this article) would not have generated the action we are seeing now. Time will tell how well all governments deal with Long Term Care Homes problems. Premier Ford needs to immediately put in motion a Public Inquiry. The time for action is now.

Sadly, "Ontario’s long-term care system has been underfunded and has faced staffing shortages for decades." Governments of all stripes in all provinces have simply refused to fund long-term facilities appropriately. And Ford's method is, again, to study a well-understood problem as a way of NOT taking action. He absolutely does nor want to raise taxes, so he won't be able to do more for long-term care without gutting other programs and departments — and he is not particularly keen on doing that.