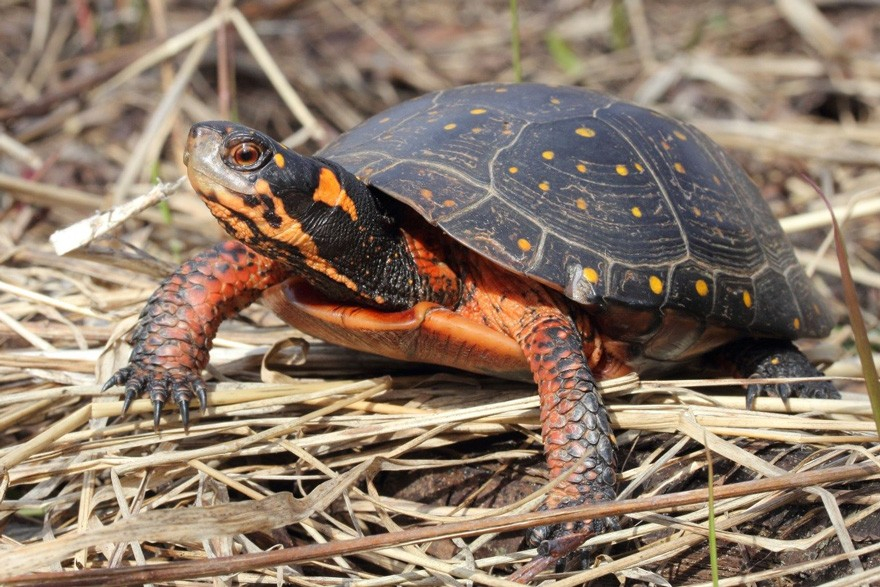 Spotted turtles are endangered in Ontario but are more abundant in the United States. Under Ontario's 2019 rewrite of endangered species rules, they're at risk of disappearing locally, researchers say. Photo by Joe Crowley via Government of Ontario
Previous story
Next story

The Ontario government’s 2019 move to weaken protections for endangered species could lead to local extinctions for some at-risk creatures, researchers have found.

The Progressive Conservatives’ changes included lesser protections for species that also exist outside the province, and a mechanism allowing industry to pay a fee to destroy key habitats and rebuild them elsewhere. The new rules threaten to undermine conservation of species at risk beyond Ontario, the peer-reviewed analytical essay, published this month in the scientific journal Facets, found.

“If (the provincial government) decides to not protect species in Ontario, this can ultimately affect the overall global resilience of the species and increase the overall likelihood of extinction,” said Nico Muñoz, a co-author of the article and a PhD candidate supervised by Simon Fraser and Western universities.

“That’s the scientific reason I see a problem here.”

Failing to protect species in southern Ontario would leave them vulnerable to local extinction, or extirpation, in an area where their potential to eventually recover is already limited. Over 80 per cent of the forests that once blanketed the landscape have been replaced with urban development and agriculture, Muñoz said, and the region has one of the highest densities of species at risk in the country. The world is also in the midst of an extinction crisis.

One example is the case of the spotted turtle, a creature the size of two and a half golf tees that can be recognized by its smooth black shell speckled with yellow-orange markings. There are only about 2,000 of them left in Ontario, mostly in scattered wetlands along Georgian Bay and the north shore of Lake Erie, but they are far more abundant to the south, in the eastern United States.

Muñoz and co-author Debora S. Obrist, a PhD candidate at Simon Fraser, analyzed the ranges of 152 species listed as endangered or threatened under Ontario’s Endangered Species Act and found 121 of them followed a pattern similar to that of the spotted turtle.

Even though there might be healthy populations of some species elsewhere, dwindling northern populations are becoming more crucial, Muñoz said. As the planet warms due to the climate crisis and human development encroaches on more southern habitats, many plants and animals are shifting north, making populations on the periphery more important to the health of the species overall.

Those northerly creatures and plants are often genetically distinct from their southern cousins, specially suited to a harsher environment. Allowing them to go locally extinct in Ontario is likely to lessen species’ overall chances of survival, Muñoz added.

“In Ontario, we have so many species that are at their northern range limits,” Muñoz said. “They’re on that leading edge of this northward shift. So ensuring that species persists here, it’s vital for ensuring that they persist anywhere.”

The office of Ontario Environment Minister Jeff Yurek acknowledged questions from Canada’s National Observer but did not provide answers.

The Ontario government’s 2019 move to weaken protections for endangered species could lead to local extinctions for some at-risk creatures, researchers from Simon Fraser and Western universities have found. #onpoli

When the government first announced it was planning changes to endangered species protections, it said the province hoped to find “efficiencies for businesses.” Later, after the changes were passed, then-environment minister Rod Phillips said Ontario was “committed to ensuring Ontario’s best-in-class endangered and threatened species protections.”

“I fully appreciate that species protections and conservation can at times be at odds with business interests and economic opportunity, and appreciate that the government has a responsibility to balance these two pursuits,” Muñoz said.

“But the whole reason we need this law to begin with is because that balance has been out of whack for so long, both in Ontario and more generally. We have a lot of species that are at risk of loss here, and we have a responsibility to prevent that.”

Ontario's Endangered Species Act is the 'last line of defense' for species faced with extinction in Ontario.

New clauses in the Act could exclude many species from protection.

‘The nature around us is part of our identity’

How well endangered species fare will depend on how the government implements the changes, some of which have “ambiguous” wording, Muñoz said.

For example, the 2019 version of the law says the province must consider the “biologically relevant geographic range” of a species when classifying it. The government could choose to interpret that as the range that is relevant to subpopulations in Ontario, a perspective that would retain protections for many species at risk, Muñoz added. But if the government interprets it to mean the species as a whole, dozens of them may be delisted.

“When you read the new clauses, the wording is very ambiguous,” he said.

Beyond their biological importance, endangered species in Ontario are also of emotional value, Muñoz said. They’re part of the forests we walk through, the creeks and lakes we splashed in as children, the stories we pass on to the next generation.

“The nature around us is part of our identity,” Muñoz said.

“This value that species have is very much local in that it doesn’t matter how abundant the species may be in eastern United States. That has value here. I think a lot of people would agree that what’s around us is important, and we have a responsibility to account for the way we affect it.”