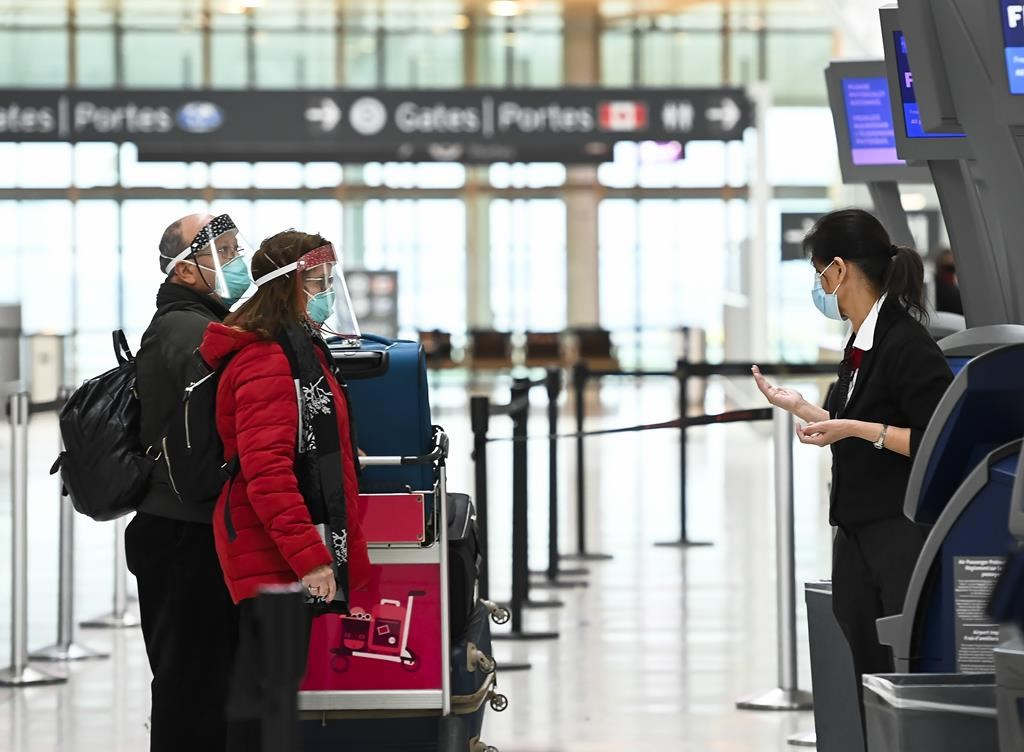 People wearing protective equipment check in at the international departures at Pearson International Airport during the COVID-19 pandemic in Toronto on Monday, December 14, 2020. File photo by The Canadian Press/Nathan Denette
Previous story
Next story

Anyone arriving in Canada starting Jan. 7 will need to have a negative COVID-19 test before boarding a flight, the federal government said Thursday as the Liberals urged vacationers abroad to prepare.

Flyers aged five and up will need have a negative PCR test within 72 hours of their scheduled departure and must show the results to their airline before they board their flight.

Travellers who receive a negative test result must still complete the mandatory 14-day quarantine upon their arrival in Canada.

Either before or upon arrival, travellers will have to provide a quarantine plan for federal officials to review. If officials aren't satisfied, the government said people will be required to quarantine in a federal facility.

The statement that came hours before the start of 2021 said Canadians vacationing abroad should immediately start arranging for a COVID-19 test to avoid delays in coming home.

The details arrived one day after cabinet ministers decided that Canada would join other countries in making a negative PCR test a travel requirement. A PCR test is designed to detect minute amounts of the novel coronavirus that causes COVID-19, usually through a swab up the nose or in the mouth.

Transport Minister Marc Garneau had been in contact with airlines on Wednesday as the high-level details rolled out. On Thursday, the government said the Jan. 7 start date was designed to provide airlines with enough time to comply with the new rules.

The National Airlines Council of Canada, which represents the country’s largest airlines, warned of major issues in Ottawa's plans, including what options passengers have if their jurisdiction does not offer the kind of test the government accepts.

A trio of Opposition Conservatives critics said in statement that the Liberals were effectively making international airline workers with no ties to Canada act as screening agents, and causing more instability for Canadian airlines.

Anyone arriving in #Canada starting Jan. 7 will need to have a negative #COVID19 test before boarding a flight, the federal government said on Thursday, December 31, 2020, as the Liberals urged vacationers abroad to prepare. #cdnpoli #travel

"Choosing to use unverifiable test certificates issued abroad, as opposed to post-arrival screening conducted by Canadian authorities, is populist policy designed to quell new headlines and put airline workers out of a job, as opposed to delivering solid public health outcomes for Canadians," part of their statement said.

The new federal testing requirement will only apply for air travellers, but Bloc Québécois Leader Yves-François Blanchet argued it should apply at all ports of entry. He also said the government should make sure that thousands of Canadians are reimbursed for travel plans that have been interrupted or cancelled due to COVID-19 restrictions.

It is essential that Canadians also understand that personal sacrifices are key to helping end the pandemic, Blanchet said in a statement.

Canada's chief public health officer, Dr. Theresa Tam, said in a statement she was concerned some Canadians are still travelling for non-essential reasons despite advice to avoid doing so.

"I am asking Canadians to reassess any travel plans," she said.

Some haven't, including politicians who now find themselves in hot water.

Among them is Rod Phillips, who resigned as Ontario's finance minister shortly after returning home Thursday morning from a two-week Caribbean vacation amid a provincewide lockdown.

Rempel Garner's husband is in Oklahoma. In the video she talked about not being able to see him or her mother-in-law who has cancer, noting at one point, "Thanks, Rod. I don't get to see my mother-in-law now because there'll be a witch-hunt if I go see my family."

In Saskatchewan, provincial Highways Minister Joe Hargrave apologized for travelling to Palm Springs, Calif., with his wife over the holidays. Although he called it an "essential" trip because he was selling a home there, Hargrave said it was a mistake to travel while so many others are making sacrifices during the pandemic.

As the clock ticked down on a year marked by the pandemic, case numbers continued to rise.

Tam said several people have tested positive in Ontario, British Columbia, Alberta, and Quebec with the novel coronavirus variant identified in the U.K.

She expected that other variants of concern will likely be found in Canada as monitoring continues.

— With files from Jon Victor in Montreal