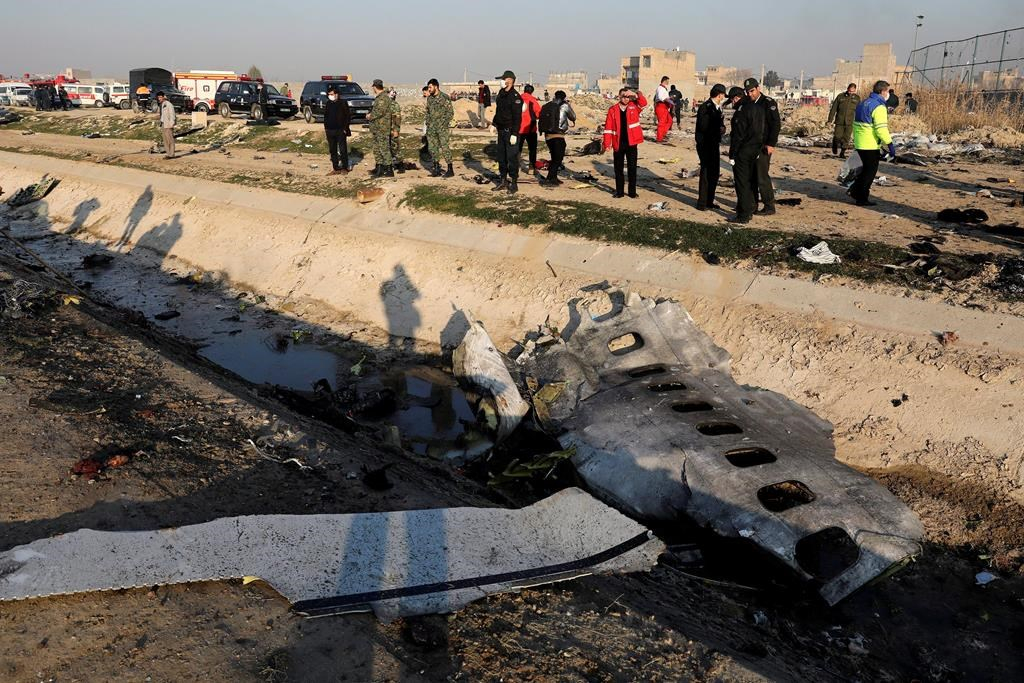 Authorities worked at the scene after a Ukrainian passenger jet carrying 176 people crashed in January 2020, shortly after takeoff from Tehran's main airport, killing all on board. File photo by The Associated Press/Ebrahim Noroozi
Previous story

Canada's special adviser on the Iranian military's downing of a passenger jet one year ago this week is rejecting Tehran's offer to pay $150,000 to the families of those killed in the tragedy.

Goodale told The Canadian Press the final amount will be subject to negotiations between Iran and Canada and the four other countries whose citizens were killed on the plane.

Iranian state television announced on Dec. 30 that the Tehran government was setting aside $150,000 for each family that lost someone on the plane. The announcement caught Canada and the other countries off-guard and appeared intended to mitigate the growing criticism of Iran as the one-year anniversary of the killings approached.

"There is a negotiating process that has yet to take place," said Goodale.

"But it hasn't yet begun. So, it's a bit premature for a number to be circulated in the public domain, because none of the other parties involved in this process have had any input whatsoever."

Goodale was appointed last March to lead Canada's response to the Jan. 8, 2020 shooting down of Ukraine International Airlines Flight 752 by Iran's Revolutionary Guard that killed all 176 people on board.

They included 55 Canadian citizens, 30 permanent residents and 53 more travellers bound for Canada, including many Iranian students, as well as citizens of Britain, Afghanistan, Sweden and Ukraine.

Goodale, Prime Minister Justin Trudeau and other government members are to meet privately Thursday in a virtual event with families and loved ones of those who perished.

Canada's special adviser on the Iranian military's downing of a passenger jet one year ago this week rejectedTehran's offer to pay $150,000 to the families of those killed in the tragedy. #PS752 #Iran #Ukraine #Cdnpoli

Trudeau has spoken to all of them recently, said Goodale, and he will reaffirm his commitment to declare Jan. 8 a national day of remembrance for the victims of airline disasters. There will also be discussion about building a memorial, but the government wants the full input of families on how it might look and where in Canada it will be erected, Goodale added.

Meanwhile, the push continues for Iran to reveal the exact details about why the tragedy occurred — what prompted a unit of its Revolutionary Guard to fire on the civilian plane. Neither Goodale nor Foreign Affairs Minister François-Philippe Champagne expects any definitive report coming from Iran any time soon.

"I'm not holding my breath. But certainly, we will be prepared to review that with the Transport Safety Board, and also the forensic team that we've put together," Champagne said in a recent interview.

Under the Chicago Convention that governs international civil aviation law, Iran is the lead investigator of the incident because the plane was felled on its soil. The fact that the Iranian military shot it down and has every incentive to cover up the true cause is the reason why Goodale says Canada is pursuing changes to the global civil aviation legal framework to prevent that in the future.

The doomed Kyiv-bound flight was one of several commercial airliners that were permitted to take off from Tehran that fateful night even though the Iranian military had fired missiles at U.S. military bases in neighbouring Iraq just hours earlier.

Goodale said the fundamental question that needs answering is given that Iran had "planned and executed" a military attack, "Why in the world did Iran keep its airspace open?"

He has other questions: "What did you do to alert the airline companies and their crews that this activity was taking place so that they could make their own decisions about whether they were going to take off or not?"

The Iranian government released an interim report in July, which Canada criticized as lacking, that said that the Revolutionary Guard's surface-to-air missile battery had been moved and had not been properly reoriented before it targeted the Boeing 737-800.

Under the Chicago Convention, Iran is expected to publish a report around the one-year anniversary of the incident, but Goodale said that isn't expected for another two months. Under the law, France and the United States are entitled to review copies 60 days in advance because they are the countries where the plane's engines and airframe were respectively built.

Canada and the other countries that lost people on the plane aren't entitled to copies, but Goodale said France and the U.S. only received theirs last week.

Goodale said the convention lays out a series of steps for starting negotiations and that Iran's compensation offer is "out of sync" with international aviation law.

"This is not a process ... when it comes to compensation that Iran can simply determine unilaterally," he said.

Families of the victims have been pushing Canada to put more pressure on Iran by imposing sanctions, specifically using its legislation to target individual Iranians with sanctions for violating human rights.

The legislation, named for whistleblowing Russian Sergei Magnitsky, would allow freezing the assets of those individuals, if they can be found, and imposing travel restrictions on them.

"Nothing is off the table," said Champagne.

"But when you're considering that, you always have to say, 'What's the purpose?' … Is that conducive to the outcome you're seeking?"

Goodale said Canada has several sanction laws that could be applied to Iran, but "the first challenge is to make sure we've got all the facts, so we are acting on the basis of solid established information" to establish how to target them.

"The Magnitsky legislation is there to be used if the government deems it appropriate," said Goodale.

"It certainly has not been taken off the table."