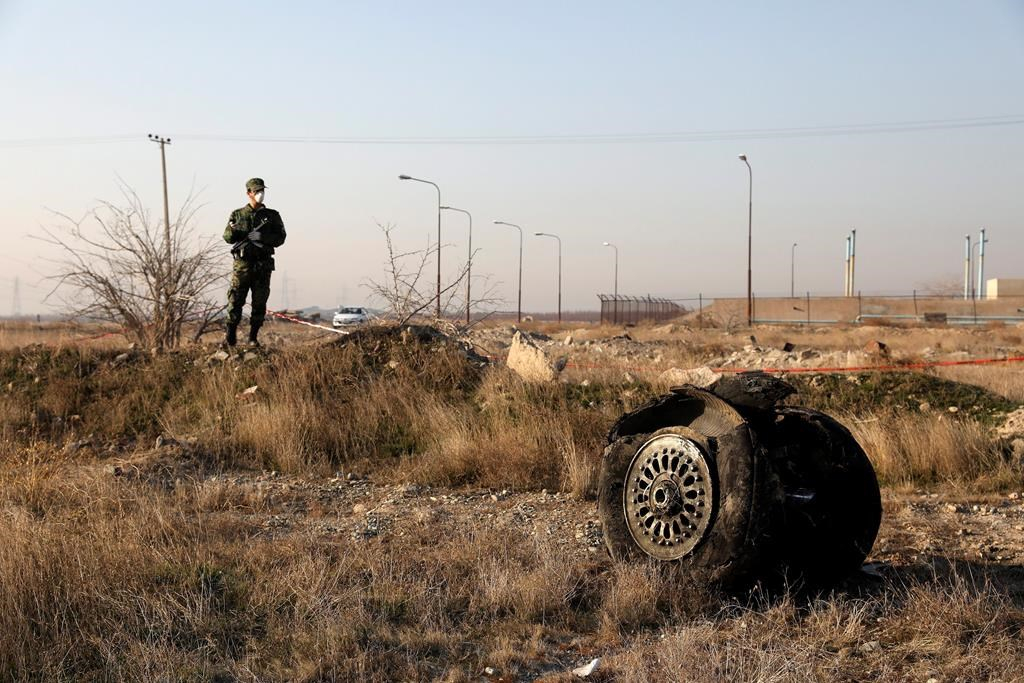 A police officer stands guard as debris is seen from an Ukrainian plane which crashed in Shahedshahr, southwest of the capital Tehran, Iran, January 8, 2020. File photo by The Associated Press/Ebrahim Noroozi
Previous story
Next story

The Canadian government has dismissed a new Iranian report on the deadly shootdown of a civilian jetliner in January, saying it provides only "limited and selected information" — and that Tehran still has many questions to answer.

The new report on Ukraine International Airline Flight PS752 released over the weekend provides several new details about what happened on Jan. 8, when two Iranian military missiles slammed into the plane shortly after takeoff from Tehran.

In particular, it says 19 seconds of data collected the plane's flight-data recorders, also known as black boxes, showed the three-member flight crew "immediately began taking actions required to control the aircraft" after the first missile hit and before the second struck 25 seconds later.

Yet the report does not provide any information about the moments leading up to the missile attack, which Iran has said was an accident. The crash killed all 176 people on board, including 55 Canadian citizens and 30 permanent residents.

It also doesn't explain why the missile was launched in the first place or why Iran's airspace was open, given it had launched a ballistic missile attack against U.S. forces in neighbouring Iraq only hours earlier.

The ballistic missile attack was in response to an American drone strike that killed prominent Iranian general Qassem Soleimani in Baghdad the previous week.

Those are the key questions that Canada and the international community want answered above all else, federal Transport Minister Marc Garneau and Foreign Affairs Minister Francois-Philippe Champagne said in a statement Monday.

"We expect the Islamic Republic of Iran to provide an answer on important questions of why the missiles were launched in the first place and why the air space was open," the statement said.

"These are the questions that Canada, Canadians and most importantly, the families of the innocent victims need answered."

The two ministers also noted the brief report only mentions what happened after the first missile struck the aircraft, but made no reference to the second missile.

The Transportation Safety Board, which had investigators in France for the downloading of the flight data last month, released a similar statement on Sunday confirming receipt of the report while raising the same questions as the ministers.

The Canadian government has dismissed a new Iranian report on the deadly shootdown of a civilian jetliner in January, saying it provides only "limited and selected information" — and that Tehran still has many questions to answer.

A representative for Canadian families and loved ones killed in the crash expressed frustration on Monday that Ottawa has not taken a harder stance with Iran, which he accused of stonewalling efforts to find out the truth about Flight PS752.

Hamed Esmaeilion, a Toronto-area dentist who lost his wife and daughter in the crash, said the federal government is "cautiously and delicately maintaining the correct position," but that it should find ways to step up pressure on Tehran.

That includes calling out what Esmaeilion argued were clear breaches of Iran's international obligations around investigating the crash and getting the RCMP more involved in efforts to hold those responsible to account.

International rules say Iran is to lead the investigation into the crash, and decides what gets released and when. But in their statement, Garneau and Champagne called on that country "to conduct a thorough and transparent investigation," adding they expect Iran to live up to its international commitments.

Iran initially denied responsibility for the crash before admitting — in the face of mounting evidence and international pressure — the Boeing 737-800 went down after being hit by two Iranian missiles.

Canada, along with the other countries that lost citizens on Flight PS752 — Britain, Sweden, Afghanistan and Ukraine — signed an agreement July 2 promising to work together to force Iran to pay compensation to the victims' families.

Iran's civil aviation authority wrote in its report on the black boxes that so far "there exists no voice or sign revealing the passenger cabin's conditions."

What happened in the cabin, and in particular how long those who were inside it knew of their doomed fates, could play into any financial settlements, said Elaine Parker, a long-time executive with the Canadian Society of Air Safety Investigators.

"The longer it is, the bigger the court settlements tend to be," she said. "That's why there is the issue of them saying, 'We don't know what was going on in the cabin.'"

An Iranian report last month blamed a number of errors for what it suggested was an avoidable tragedy, starting with the surface-to-air missile battery that targeted the aircraft having been relocated and not properly reoriented.

Those manning the missile battery also could not communicate with their command centre, the report said. They also misidentified the civilian flight as a threat and opened fire twice without getting approval from ranking officials.

The report did not say why the Iranian military moved the air-defence system, but noted the Ukrainian flight had done nothing out of the ordinary up until the missile launch, with its transponder and other data being broadcast.

Parker, who has investigated air crashes for four decades, said the Iranian report seemed designed to push the point that the country has been as open as it possibly could. She also questioned how much more information would be made public.

This report by The Canadian Press was first published Aug. 24, 2020.