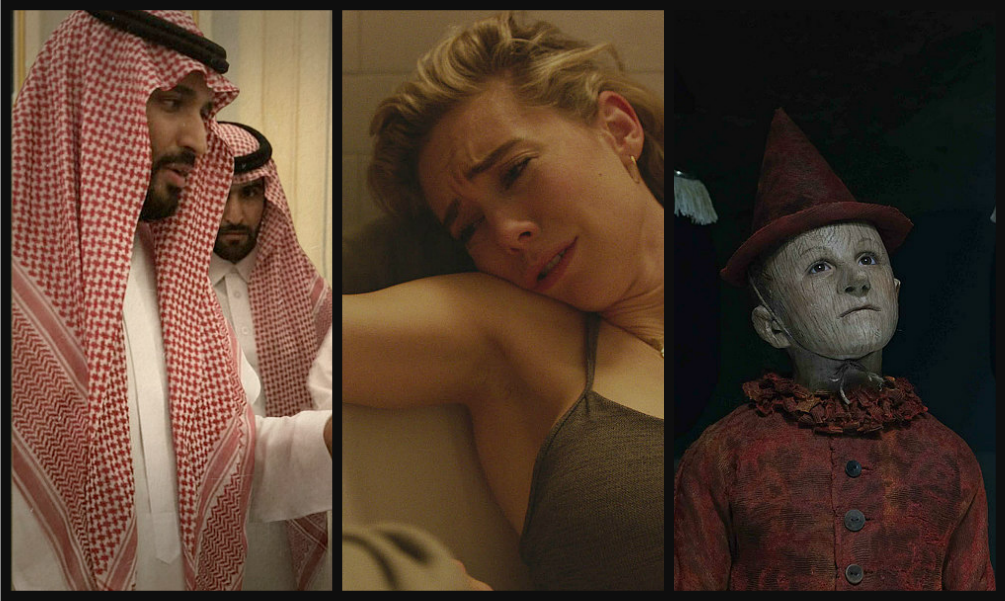 Also: A runaway slave’s story, some British ultra-violence, and an Alabama romance.
Previous story
Next story

The new movies this week can’t match the drama, shock and outrage we watched on TV from Washington, D.C., on Wednesday. But they do bring us light romance, some timeless kid-lit, a bloody puzzle, and an escaped slave’s story. Plus, a potent documentary with a cameo by Donald Trump. Read on.

THE DISSIDENT: Here’s a supreme example of hard-hitting journalism. So hard that it has been almost buried since it premiered at Sundance last year, where the audience stood up and cheered. The facts it unearths are much too threatening for business and diplomatic connections with Saudi Arabia, and may be the reason for its sidelining. It finally arrives video-on-demand, and you should seek it out.

The basic story is about Jamal Khashoggi, the writer for the Washington Post who was killed in the Saudi consulate in Istanbul, Turkey. He was a harsh critic of the regime (and originally an insider, and therefore knowledgeable). His main target was the new leader, Crown Prince Mohammed bin Salman, MBS for short, who he attacked as a tyrant. MBS feared his access to U.S. President Donald Trump was in danger (it took a Trump veto to restart arms sales) and 15 of his agents went to Istanbul just as Khashoggi arrived. He was never seen again, but there is an audio tape of his killing and dismemberment. The film doesn’t play it, but lets us read a transcript. There is much more evidence from security cameras, and, surprisingly, a Canadian connection. Omar Abdulaziz, in Montreal as a refugee, describes a social media war between Saudi Arabia and a group he organized. He also criticizes the regime in a YouTube show, and it’s growing influence, he thinks, may have led to the Khashoggi murder. The film’s director, Bryan Fogel, has a good track record. His film Icarus, about doping in sports, won an Academy Award and got Russia banned from the Olympics for a time. (Streaming VOD/EST.) 4 out of 5

PIECES OF A WOMAN: You’d better be strong in disposition to watch this Netflix film about a home birth gone wrong. The event itself is graphically portrayed in one continuous shot that lasts 23 minutes and delivers anxiety and then anguish. The midwife monitors the baby’s healthy heartbeat, then loses it. The baby is stillborn. What went wrong isn’t discovered, but the effects are felt by all involved over the months that follow. Mostly, naturally, by the woman herself, played in a very moving and natural performance by Vanessa Kirby. She played young Princess Margaret in The Crown and is and will again be in the Fast and Furious and Mission Impossible films. She won the best actress award in Venice for the mood changes she shows here.

There’s also her mother, played by Ellen Burstyn, who pressures her to sue the midwife (Molly Parker). And there’s her husband, played by Shia LaBeouf, who gets violent and frustrated as his wife turns icy and aloof. It’s a role that fits him perfectly, but he has been removed from publicity material for the film because of abuse allegations in his real life for which he’s now apologizing. In the film, he strays and dreams of escaping (from Boston to Seattle). There’s a family dinner scene that brings out resentment (not needed) and affecting sequences (that work very well) as Kirby’s character watches children at the mall or feels pity from co-workers at the office. Hungarian director Kornél Mundruczó and his writer-partner Kata Wéber originated this for live theatre, and turned it into a powerful film (shot in Montreal, incidentally), financed by Bron Studios here in Burnaby. (Netflix) 3½ out of 5

PINOCCHIO: The enduring tale of the wooden puppet that wants to be a real boy gets told again. And before two more arrive (one starring Tom Hanks), here’s Italy’s latest version featuring a toned-down Roberto Benigni as the wood-carver/father Geppetto. Almost 20 years ago, he played the puppet in a film he directed. This time, he’s only in it early and late, and most of the film gives us a child actor named Federico Ielapi as the somewhat bratty kid who has to learn some hard lessons as he wanders through life. Chief among them? Don’t trust anyone, particularly people (or foxes and cats) with get-rich-quick schemes. Also, go to school and study hard if you want to grow your humanity.

Carlo Collodi’s classic tale got a colourful, lilting, and animated telling by Disney and won two Oscars in 1941. Matteo Garrone has made it somewhat darker and a little creepy in live action. The boy in his wood makeup looks like an alien figure from another world. The characters he meets are more menacing, except, of course, the cricket and the fairy who help him. The circus he joins, the island of toys, the whale, they’re all here and shown with more realism and danger than before. Garrone is most famous for a very strong film, Gomorrah, about the Italian Mafia. Not for him to soften Pinocchio. He does make it magical, though. (Streaming at VIFF Connect as part of an Italian film festival.) 4 out of 5

EMPEROR: It’s good to get these lesser-known stories about America’s terrible racial history, but this one is marred by not telling us all of it. And some events on the way are questionable and possibly even wrong. We meet Shields Green, who was born a slave and escaped when the plantation got a new and very harsh owner. Shields went north just before the Civil War, was influenced by two abolitionists, the thinker Frederick Douglass and the militant John Brown, whose attack on Harpers Ferry he joined.

Shields was pursued by bounty hunters, met anti-slavery activists along the way, and carried a deep regret for leaving his son behind, and ached to connect with him again. That’s lots of drama there, but it comes to us stiffly written and directed by Mark Amin. It’s full of gruff and heavy-breathing racists, and a few better people. That, I can tolerate. The film is didactic after all. But it rewrites the ending by not getting to it at all, possibly to make it more uplifting. The actors do what they can with it, including Dayo Okeniyi as Green, Ben Robson as a bounty hunter, Bruce Dern and Kat Graham as activists, and James Cromwell as John Brown. They can’t save the film from being clichéd, though. (Available on demand and digitally.) 2 out of 5

KNUCKLEDUST: The Brits do violent action, too, as writer/director James Kermack demonstrates with this bloody, sometimes ugly, thriller. There’s a secret fight club, you see. People pay to watch men battle each other to a red mess, death preferably. The bodies are dismembered and disposed of. The fighters are military veterans who’ve ended up on the street homeless.

The police raid the club and try to figure out who is running the place and who is this one guy (Moe Dunford), known as Hard Eight, who has somehow survived. A top military official is coming to get him and a chief inspector (Kate Dickie) has only a short time to interrogate him. The film toggles between battle segments and the questioning. What exactly is the role of Serena, played by Camille Rowe? She is said to own the club, certainly runs it, but maybe for somebody higher up? Interesting puzzle for us, but far too stacked with diversions. You can’t tell who is who, who is truthful, and how they connect. The film has a very low opinion of them, and of humanity in general. It’s for a particular audience. (Available on demand and digitally.) 2½ out of 5

STARS FELL ON ALABAMA: Maybe you’re in the mood for some mindless fun to take your thoughts off everything else. This will do. It’s trite, sure, but also sunny, cheerful and strongly in favour of recalling and getting back to the small town you came from (or maybe, wish you came from). James Maslow plays a Hollywood talent agent who intends to go to Willow Valley, Ala. (population 1,400) for a high school reunion. All his old friends are married; he needs a woman to take along, and who better than Madison Belle, a starlet he’s promoting. (She’s played with lots of warmth and charm, by Ciara Hanna.)

He has one rule: He won’t date his clients. How long do you think that will stand up on such a trip? Right. There’s only one room for the both of them, and they do get along: at the pub, in the pool at the school they sneak in to, and at the reunion dance. There are complications when he sees her kiss somebody, and later she sees him do the same. (Both times with explanations.) Also, her ex-boyfriend, a rock singer played by Zebedee Row (true), shows up, wants to restart something with her, and could pop the pretence going on. Yes, it’s light and slight, but a pleasant enough time-waster for people who go for that. (Also available on demand and digitally.) 3 out of 5