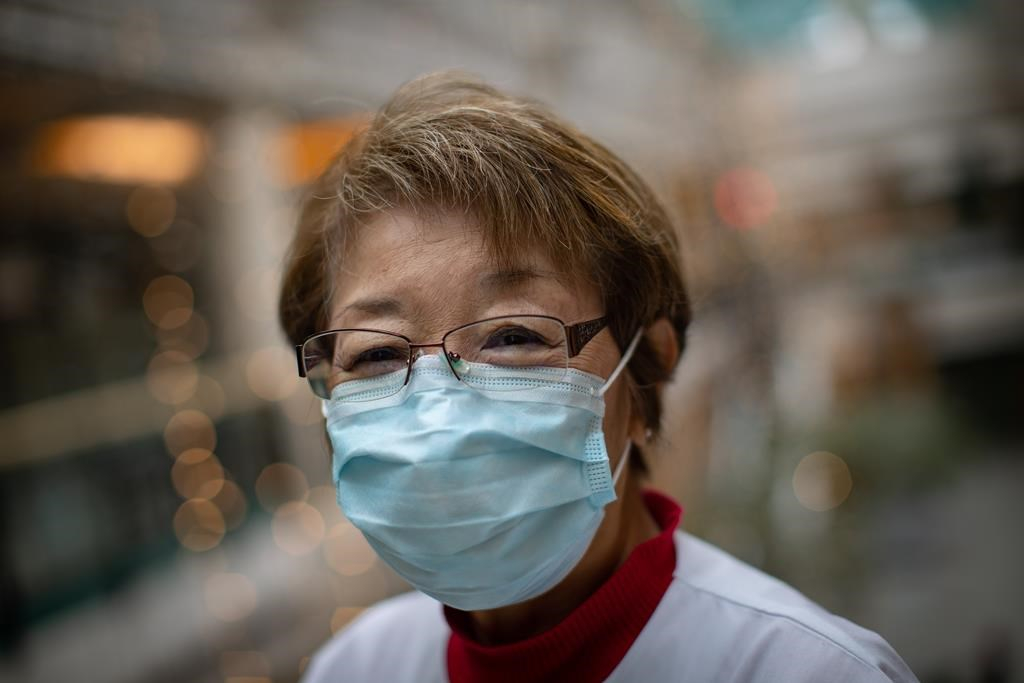 Marcia Carr, 73, who returned to nursing during the first wave of the COVID-19 pandemic after four years in retirement, poses for a photograph in New Westminster, B.C., on Thursday, January 7, 2021. Photo by The Canadian Press/Darryl Dyck
Previous story
Next story

Marcia Carr returned to nursing during the first wave of the pandemic after four years in retirement and now wants to "hit the ground running" to help vaccinate as many people as possible.

"I feel a very strong professional responsibility and accountability that if I've got this knowledge and the skills and ability that I need to be part of the solution," said Carr, 73.

She is also among retired and current health-care professionals waiting to work at immunization clinics, mobile units or wherever they're needed.

Carr said provinces need to communicate their vaccination plans better so health-care providers aren't speculating about the reasons for delays.

"The communications channels, I think, need to be opened up far greater," she said.

"It causes anxiety and frustration, which are normal responses to a situation that is urgent."

British Columbia's regulatory colleges of nurses, doctors and pharmacists called on their retired members last month to be relicensed to be placed on the province's COVID-19 emergency health provider registry.

Some health-care professionals, including in Ontario, say they are frustrated at the slow pace of immunization while vaccines sit unused.

Dr. Naheed Dosani, a palliative care physician who works with seniors and homeless people in Toronto and the Peel region, said Ontario is facing a crisis with a record number of COVID-19 cases and deaths following the holiday season when vaccines were not offered for several days.

"We're at a state where nearly 70 per cent of the province's total supply of COVID-19 vaccines is sitting in freezers and not getting into arms of those who need it most," he said, referring to residents in long-term care homes that are experiencing outbreaks.

Health-care professionals ready to help but some say #vaccine rollout too slow. #COVID19

"There is an urgency here and I'm hopeful that we will see timelines that are much quicker than what we've been seeing."

So far, doctors, nurses, pharmacists, and community health workers have not been used in a way that is efficient because vaccines have mostly been administered in hospitals, even though higher volumes of immunization can be done in community settings, Dosani said.

"Staffing should not be an issue. People are ready to sign up, to volunteer, to work during business hours, after business hours so that every person in this country gets the vaccine that they need."

Dosani said slower-than-expected inoculation rollouts could also send the wrong message to those who are hesitant about getting vaccinated, including racialized people in essential, low-paying jobs such as personal support workers in care homes.

Prime Minister Justin Trudeau called a virtual meeting with the premiers Thursday after saying earlier this week that he wants to work with the provinces and territories because the administration of vaccines has been a challenge in some jurisdictions.

Ontario Premier Doug Ford said all long-term-care residents, staff and essential caregivers in pandemic hot spots will be vaccinated by Jan. 21 and immunizations in Indigenous communities will begin later this week.

Dr. Samantha Hill, president of the Ontario Medical Association, said she has asked the government since early December to work quickly with the association, which three weeks ago released a set of recommendations on the province's vaccination plan.

The recommendations include administering vaccines in schools, mobile vans, arenas, and other large indoor and outdoor spaces. The association also called for the start of vaccination for children under 16 and the use of smartphones to book appointments.

"The (Ontario Medical Association) also understands that this is a rapidly changing situation and we have heard from our physician members who are showing frustrations with uncertainty about when vaccines will be available, or communication of concrete deadlines," Hill said in a statement.

Ontario's Health Ministry said work is underway to allow people to help with vaccinations and that details would be provided later.

Dave Deines, president of the Paramedic Association of Canada, said vaccinations are part of the training for its members but he's concerned that many may not be called on.

"I think paramedics have shown the value they can contribute to fill health-care gaps during the pandemic," he said. "Hopefully, policy-makers will recognize this and rely on paramedics to play an integral role in the vaccine rollout."

Deines said community paramedics in B.C. have been authorized to provide vaccinations while advanced care paramedics will administer them in Alberta.

In Ontario, paramedics in different places are providing vaccines including in Ottawa, where they were scheduled to start giving shots to long-term care residents starting Thursday, he said.

His colleagues in Newfoundland and Labrador have not been contacted about providing vaccines for COVID-19, Deines said.

British Columbia Health Minister Adrian Dix said Wednesday that 19 First Nations in rural areas received the Moderna vaccine last week, but there has been a lack of vaccine doses for broader distribution around the province.