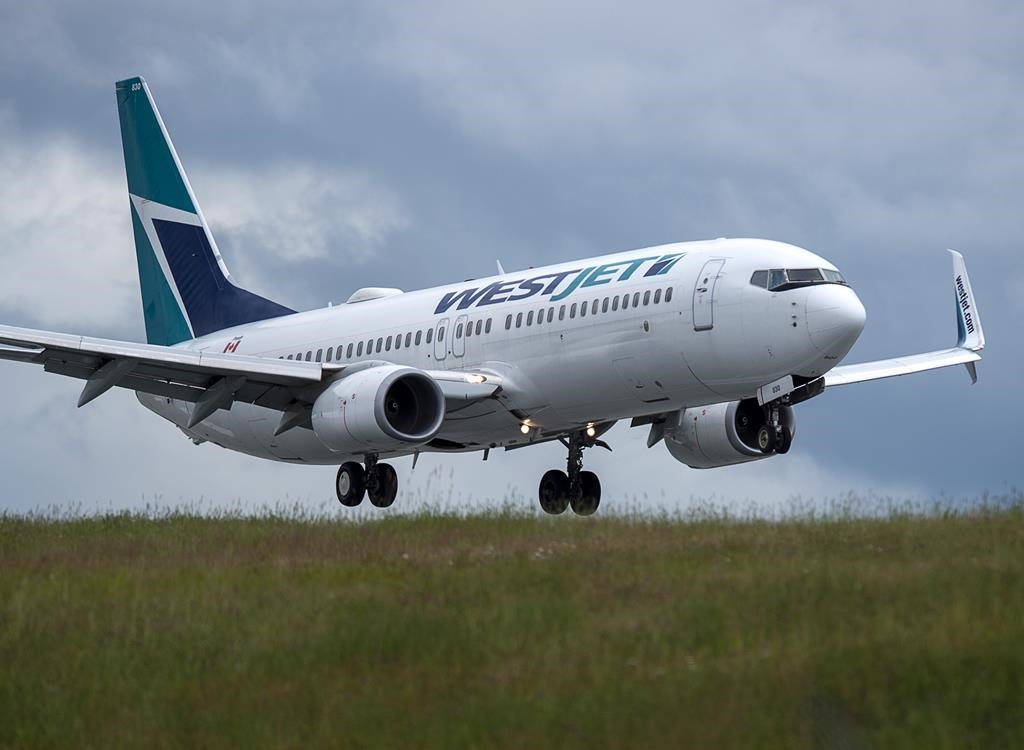 The CEO of WestJet Airlines Ltd. is laying the blame squarely on "incoherent" policy from Ottawa as his carrier cuts staff and flights in response to new COVID−19 testing requirements for passengers returning to Canada.

The Calgary−based airline announced Friday about 1,000 employees will be furloughed, temporarily laid off, put on unpaid leave or have their hours cut, and it will chop about 30 per cent of its capacity for February and March and pull 160 domestic departures from its schedule.

Trip cancellations and reductions in new bookings began immediately after the federal government warned of the inbound testing rules and continued requirement for a 14−day quarantine on Dec. 31, said WestJet CEO Ed Sims in a statement.

"The entire travel industry and its customers are again on the receiving end of incoherent and inconsistent government policy,"’ he said.

"We have advocated over the past 10 months for a co−ordinated testing regime on Canadian soil, but this hasty new measure is causing Canadian travellers unnecessary stress and confusion and may make travel unaffordable, unfeasible and inaccessible for Canadians for years to come."

The new flight cuts mean WestJet will have reduced flights by more than 80 per cent compared with the same time last year, it said.

International capacity will be down 93 per cent year over year and only five daily flights will be offered compared with 100 last year. Overall, it will offer 150 daily departures, returning to levels not seen since 2001, it said.

The federal government said last week that Canada−bound air passengers would have to provide proof of a negative COVID−19 test result in order to board their flight — a requirement that took effect on Thursday.

Transport Minister Marc Garneau said on Wednesday the restrictions would go ahead as planned to coincide with the expiration of Canada’s ban on flights from the United Kingdom. Canada halted most air travel from the U.K., where a mutated strain of COVID−19 had been discovered, on Dec. 20.

Airlines and passengers had a turbulent 24 hours under the new testing regime.

WestJet said it had to deny boarding to 32 passengers on its six international flights into Canada on Thursday.

The travellers were turned away due to improper tests — antigen or antibody tests, rather than the required PCR test common in Canada and involving a deep nasal swab — no test at all, or one taken more than 72 hours before departure, she said.

“Our team on the ground has rebooked guests affected and is assisting with finding eligible tests whenever possible … to ensure they can return to Canada at a later date,” Bell said.

Air Transat denied boarding to 10 passengers who did not have a PCR test on its three northbound flights Thursday. A dozen more travellers were turned away on a flight from Paris on Friday morning.

“In addition, for the three flights, we observed a significant number of no−shows, which we cannot explain with certainty. We will follow the evolution of the situation closely in the coming days,” said Transat spokesman Christophe Hennebelle.

“There will be some stranded passengers, unfortunately – a little bit more heads−up and co−operation may have helped preventing this.”

On Wednesday, Wendy Paradis, president of the Association of Canadian Travel Agencies, said the testing requirements were being imposed on "unrealistic" timelines and were already causing "chaos" for travel agents as travellers lined up to cancel trips.

WestJet, which was bought by Onex Corp. in 2019, joined Air Canada, Air Transat and Sunwing, along with the National Airlines Council of Canada and the International Air Transportation Association, in unsuccessfully asking Ottawa for an 11−day extension to implement the new rules.

In October, WestJet suspended service to four Atlantic Canada cities and laid off 100 corporate employees, after laying off 4,000 workers since the pandemic began.

Sims said in a statement on Friday that other WestJet workers will also see an impact on their paychecks, calling the workforce cuts a "cruel outcome for loyal and hardworking staff who have been diligently working through the pandemic.”

Companies in this story: (TSX:ONEX, TSX:AC)

Their lobbying failed, must

Their lobbying failed, must be terribly disappointing. Imagine a government more concerned with people's health than with the rewards of sucking up to an airline (eh, Mr Kenney?).