By Michael Bramadat-Willcock | News, La Ronge, Saskatchewan | May 20th 2020
#596 of 1465 articles from the Special Report: Coronavirus in Canada 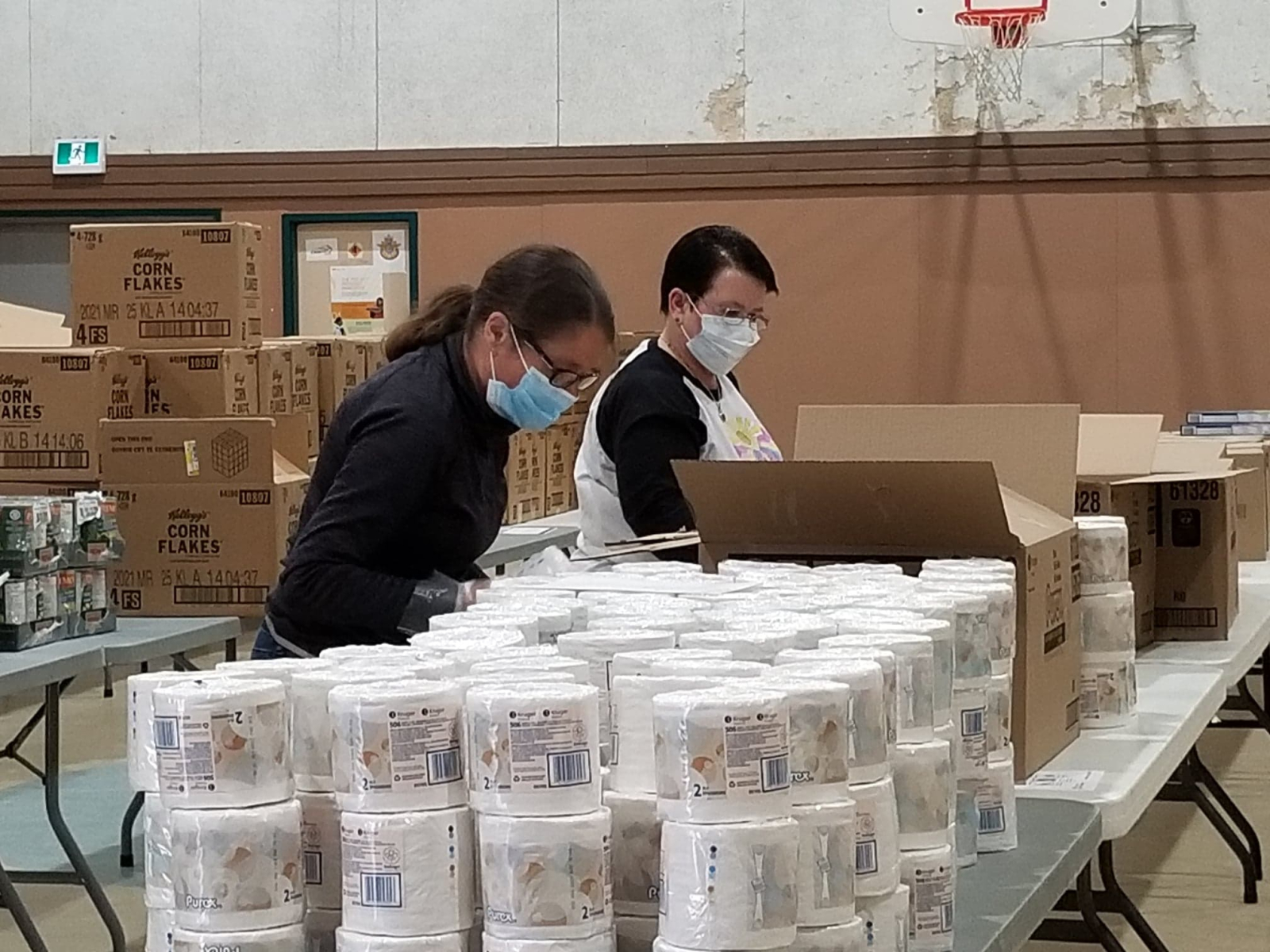 Residents prepare hampers with donations for distribution to prenatal women and elders in the La Ronge community. Photograph by Michael Bramadat-Willcock.
Previous story
Next story

Phase two of the Re-Open Saskatchewan Plan is starting on Tuesday, except for the northwest of the province. Restrictions in the province are gradually being lifted in five phases. The northeast and north central areas are now on the same reopening schedule as the rest of the province and are now also in phase two.

"Following consultation with a number of leaders in communities further to the east (of the northwest area) but also in Saskatchewan's north the travel restrictions for the north-central and the northeastern part of the province including the communities of La Ronge, Air Ronge, Pelican Narrows and Sandy Bay are now being lifted," Saskatchewan Premier Scott Moe said.

“I think it’s both good and bad,” La Ronge Mayor Ron Woytowich told Canada’s National Observer shortly after the announcement was made.

Woytowich cautioned that although reopening looks good on the surface and could help economically, access to healthcare and quality of life will be impacted if the virus is spread to residents by visitors.

“It’s good for economics, family can go back and forth and everything else, but the flipside is that (so far) we’ve felt safe. It’s a good thing, but I’m also a little wary of it.”

He said that when a presumptive case was announced in the Lac La Ronge area on May 14 everybody was suddenly scared. That case was later found to be negative but he said it served as a reminder of the importance of continuing to follow social distancing guidelines and to abide by the public health order.

Woytowich is also concerned over whether the region can afford an increase in cases potentially brought on by travel from the south. “If somebody that we knew got it, they would end up going to Saskatoon to the hospital. Can we afford that?”

He said it's one thing for somebody from Saskatoon to come north to a cabin and end up getting COVID-19, because then they go back home to their families in the city.

“If somebody from La Ronge gets it and we end up in Saskatoon, then how can our family go and see them?” Woytowich said.

He said that he wasn’t aware that the announcement would be made today, and that the town had not been called beforehand either. Although the announcement came as a surprise, he said he hadn’t expected a call, and it was not an entirely unexpected development.

“We’re going to have people now coming up from the south that want to go to their recreational cabins and they’re going to come up. They’ve been calling,” Cumberland MLA Doyle Vermette.

Woytowich said that there is a lot of travel between La Ronge and northwest communities such as Pinehouse.

“We rely on these communities a lot. We are the economic center of the region,” Woytowich said.

Moe said that travel restrictions will remain in place for the northwest, for now.

"Community leaders and volunteers, healthcare workers, public safety officers and many others continue to do a great job in La Loche and in many other northern communities as they work together to control the spread of COVID-19," Moe said.

Restrictions that were put in place for residents in the Northern Saskatchewan Administration District (NSAD) are now limited to the western half of that district, where most new COVID-19 cases are now located. Northwest communities that remain restricted include La Loche, Beauval, Buffalo Narrows, Île-à-la-Crosse and Pinehouse.

“It's so new to even the (Saskatchewan Public Safety Agency) staff that work with the roadblocks that they’re just making sure that they have the information… It looks like they’ve opened it up and I think it will surprise some people,” Cumberland MLA Doyle Vermette told National Observer in an interview after the announcement.

He said that there is likely to be confusion in communities that just found out about the change, “I hope that leaders and community members are aware of it.”

Vermette said that his office has received lots of emails and calls from cabin owners wanting to come up and he’s warning residents to continue following social distancing guidelines.

“We’re going to have people now coming up from the south that want to go to their recreational cabins and they’re going to come up. They’ve been calling,” Vermette said.

“There has been a lot of pressure put on the government from people down south to get up here to their cabins.”

Premier Moe told reporters that he does think there will be more movement between the north and the south of the province as a result of the change.

"I would suspect that there will be people that will go not only to the community of La Ronge but (to) other communities. As well, you'll see people in those (northern) communities that will come south to southern communities... The road travels both ways," Moe said.

Further restrictions were lifted in the province over the May long weekend. As of Friday, golf courses and drive-in theatres were able to begin operations.

Beginning May 22, owners and employees of outfitting operations are allowed to travel to outfitting camps, including those in the NSAD.

On Tuesday, Saskatchewan had seven new confirmed cases of COVID-19, bringing the provincial total to 599.

According to the Saskatchewan government, businesses that can now begin operation include retail businesses, shopping malls, select personal services such as a hairstylist or barber, as well as public markets and farmers' markets.

Northwest residents are ordered to remain in their local communities and to practice appropriate physical distancing. Travel related to the delivery of essential services will continue to be permitted.

As of May 20, supply limits on prescription drugs that were introduced to guard against drug shortages will be lifted. The Saskatchewan Health Authority is resuming services such as outpatient physiotherapy appointments, kidney health services, some laboratory services, home care and expanded immunizations.

Travel restrictions imposed by communities such as the Lac La Ronge Indian Band and Peter Ballantyne Cree Nation remain in place and are at the discretion of those communities.

Anyone wishing to travel to an Indigenous community in the region should check to see if there is a no visitors rule or restricted access before doing so.

For more information on the developing COVID-19 situation in Saskatchewan, visit www.saskatchewan.ca/COVID19.