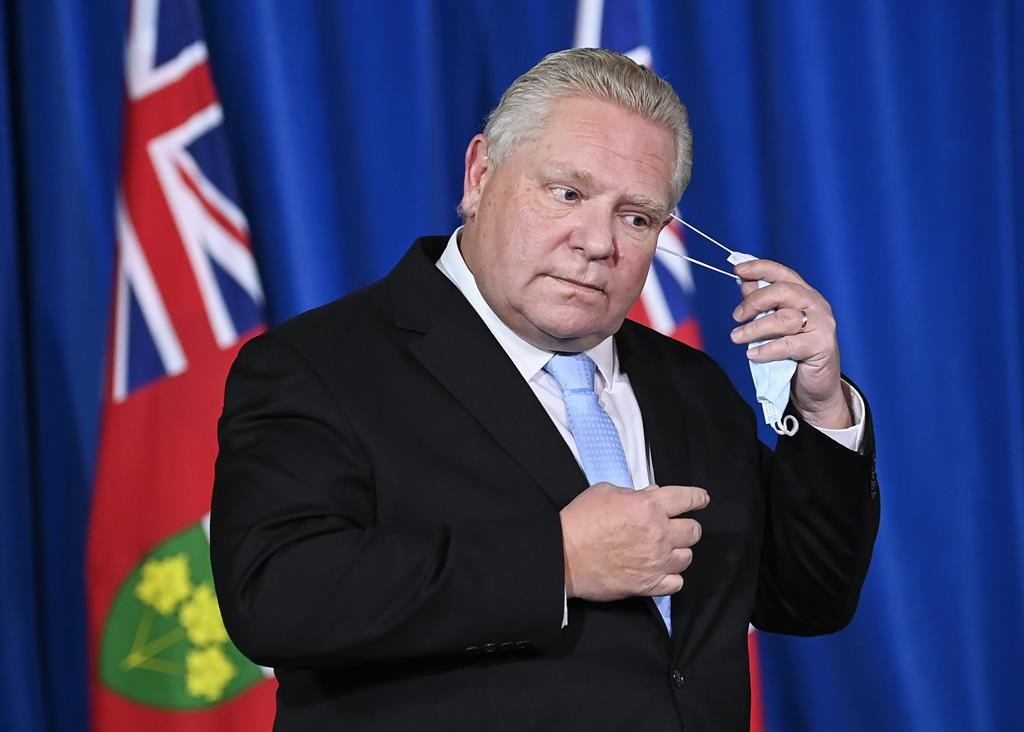 It was a day of disparity in Canada's protracted battle against the novel coronavirus, with some provinces recording alarmingly high numbers of infections on Sunday while at least one province managed to whittle new cases to zero.

The country's lopsided pandemic is evident when comparing those figures with provinces farther east, where Newfoundland and Labrador saw its first new case in several days on Sunday and Nova Scotia – the most populous province in Atlantic Canada – had none.

In the west, while Saskatchewan had no new COVID-19 deaths for the first time in a week, it still had 307 new infections while Manitoba recorded 151.

And on the same day that Alberta recorded 811 new cases of the novel coronavirus, New Brunswick had 14 – a massive gap even taking the large population differences into account.

Though vaccines will help gain "lasting control" over the virus, she said an "all Canadian effort" is needed to keep up the pace of progress.

2/2 As we advance toward widespread, lasting control of #COVID19 through safe & effective vaccines, an all Canadian effort is needed to help keep up the pace of progress! Maintain public health practices: #WashMaskSpace #Avoid3Cs https://t.co/XA6qs0saSv

As cases continued to rise – or fall, depending on the province – new rules and strong words took aim at the pandemic's seemingly inexorable advance in Canada.

Quebec's new curfew is perhaps one of the most severe steps taken by a province to curb its rising caseload.

Dozens of residents are already facing fines for violating the province's 8 p.m. to 5 a.m. curfew.

In Ontario, Premier Doug Ford warned his province will see "turbulent waters" over the coming months.

"Our healthcare system is on the brink of being overwhelmed and we must take every precaution to keep our most vulnerable safe," he said on Twitter.

Friends, we are going to see some real turbulent waters over the next few months. Our healthcare system is on the brink of being overwhelmed and we must take every precaution to keep our most vulnerable safe.

Other people’s lives are in your hands. pic.twitter.com/HmFLDPY9P6

"I know it's been challenging. I'm asking one more time. We need to band together, we need to stick together."

Indeed, the underlying message from politicians and health officials on the weekend was the dire need to double down in the fight against COVID-19.

Even in Nova Scotia, on a day with no new cases, chief medical officer of health Dr. Robert Strang said the province is "not out of the woods yet" and urged residents to continue following public health guidelines.

Federal politicians also weighed in on the virus's ongoing spread on Sunday.

The leaders of the federal NDP and Green Party were among those who descended on a Toronto-area nursing home to call for more action and urgency in vaccinating at-risk seniors and supporting overworked staff in such facilities.

Green Party Leader Annamie Paul said her father died at the St. George Care Community during the first wave of COVID-19 in May. While he did not succumb to the illness, Paul believed the pandemic contributed to his death as staff members failed to realize that a catheter had been put in wrong.

“By the time the underpaid, overworked staff in this facility realized what was happening, it was too late,” Paul said. “He went to the hospital, he was dead hours later. No one in this country at any stage of life should have to die from a preventable bladder infection that can be treated with a course of antibiotics.”

St. George was one of 245 long-term care facilities in Ontario reporting a COVID-19 outbreak on Sunday.

The illness has ripped through nursing homes across the country, with seniors aged 80 or more accounting for 70 per cent of all COVID-19 deaths in Canada, according to the federal government.

Paul went on to blast the federal and Ontario governments for not doing more between the first and second waves of the pandemic to protect seniors in long-term care homes, as well as what she described as the slow rollout of vaccines and rapid-testing kits for COVID-19.

NDP Leader Jagmeet Singh also criticized the two levels of government, saying both need to do more to protect seniors – and that Canadians don’t care whose jurisdiction it is.

The federal and provincial governments have been at odds over the slow pace of vaccinations, with each blaming the other for the problems.

“The federal government has to play a stronger role. They've got the resources and the know how. They've got to work with provinces to make sure we're actually getting the vaccines into people's arms, particularly the vulnerable populations,” he said.

“It's not enough to have doses available if we're not actually getting people vaccinated.”

– With files from Lee Berthiaume

Approved COVID-19 vaccines not enough to inoculate all Canadians by September, feds say