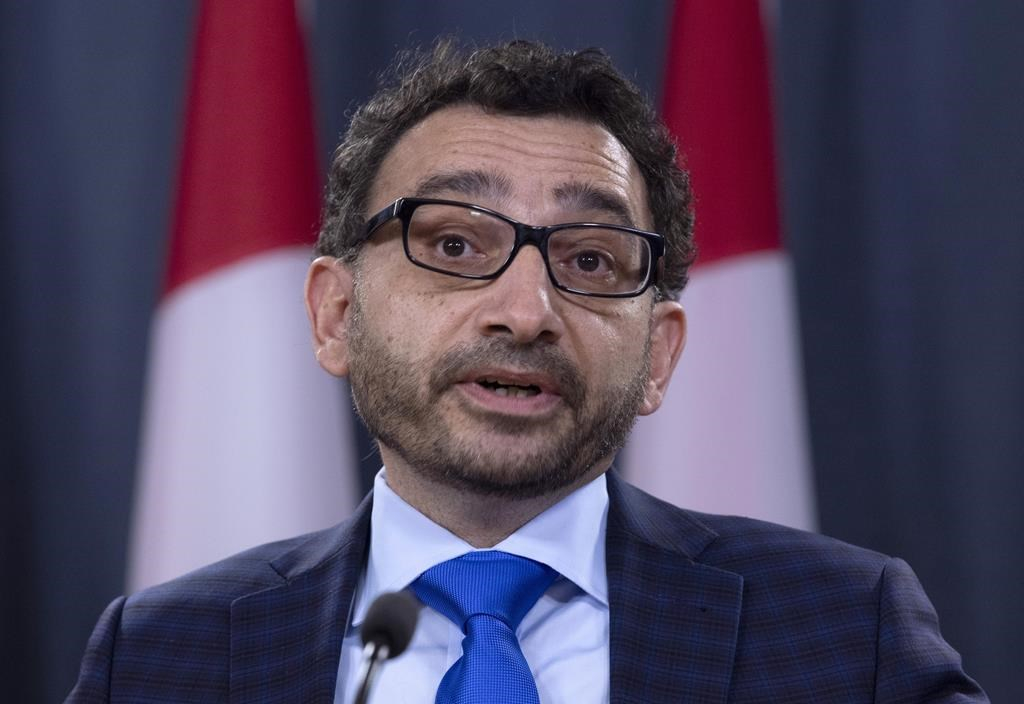 OTTAWA — Transport Minister Omar Alghabra says he feels let down by Bloc Québécois efforts to taint his past with "dangerous and harmful innuendo."

"I am disappointed by the Bloc Québécois’ attempts to create divisions for mere political gain," he said Wednesday in a statement to The Canadian Press.

"I expected better … We know what such misinformation could lead to," he said, calling on the Bloc to reconsider its insinuations, which he dubbed a "dangerous game."

Alghabra, who received his first ministerial post as part of a cabinet shuffle Tuesday, was reacting to a Bloc release that sought to sow doubt about his association with what it called "the political Islamic movement."

Leader Yves-François Blanchet said Wednesday that "questions arise" due to the minister’s former role as head of the Canadian Arab Federation.

However, Blanchet said he "refuses to accuse" the minister of anything specific.

Alghabra was the federation’s president before being elected as a Toronto-area Liberal MP in 2006.

Rather than make specific accusations, the Bloc pointed to a 2016 article by a right-wing Quebec newspaper columnist that made implications about Alghabra’s personal and professional history.

“It’s really questions about his past … and also the separation of church and state, which is a profound value for the Bloc," said spokesman Julien Coulombe-Bonnafous.

"We don’t want to raise any accusations, because I don’t think there’s that much."

Bloc Québécois Leader Yves-François Blanchet said Wednesday that "questions arise" due to the transport minister’s former role as head of the Canadian Arab Federation, however he "refuses to accuse" the minister of anything specific. #cdnpoli

In 2009, then-citizenship and immigration minister Jason Kenney opted to cut funding for the Canadian Arab Federation, whose leader at the time made statements that Kenney called anti-Semitic and supportive of terrorist groups.

The Bloc’s attempt to undermine confidence in Alghabra follows his move to distance himself from a YouTuber who has expressed intolerant views toward LGBTQ communities.

Alghabra said in a statement Tuesday night he is a longtime advocate for LGBTQ rights and was "shocked and disappointed" to learn of a video using homophobic slurs that was posted online by Fadi Younes, whose digital marketing agency Alghabra had hired on a contract that has since been terminated.

"I was not aware of these comments before today and I wholly reject them," said the MP for Mississauga Centre.

"We must combat ignorance, hate or intolerance in our society. I will continue to support LGBTQ rights, as we continue to build a more inclusive and tolerant society for everyone."

This is not the first time Alghabra has dealt with innuendo about his background during his time in politics.

In 2018, Conservative Sen. Denise Batters apologized to Alghabra, who was born in Saudi Arabia, after she wondered aloud why the then-parliamentary secretary for the foreign affairs minister wasn’t questioned about his place of birth while speaking with media about Canada’s diplomatic dispute with the country at the time.

"Senator, I’m a proud Canadian who is consistent in defending human rights. How about you?" Alghabra tweeted in response to a Twitter post from Batters.

The next day, he tweeted that she had called to apologize, saying he accepted the gesture and that Batters had told him "this is a lesson to all of us."

"Unfortunately, I have also become familiar with facing suspicion and baseless attacks. It is not uncommon for many Canadians to experience such suspicion because of their background and who they are," Alghabra said in the statement Wednesday.