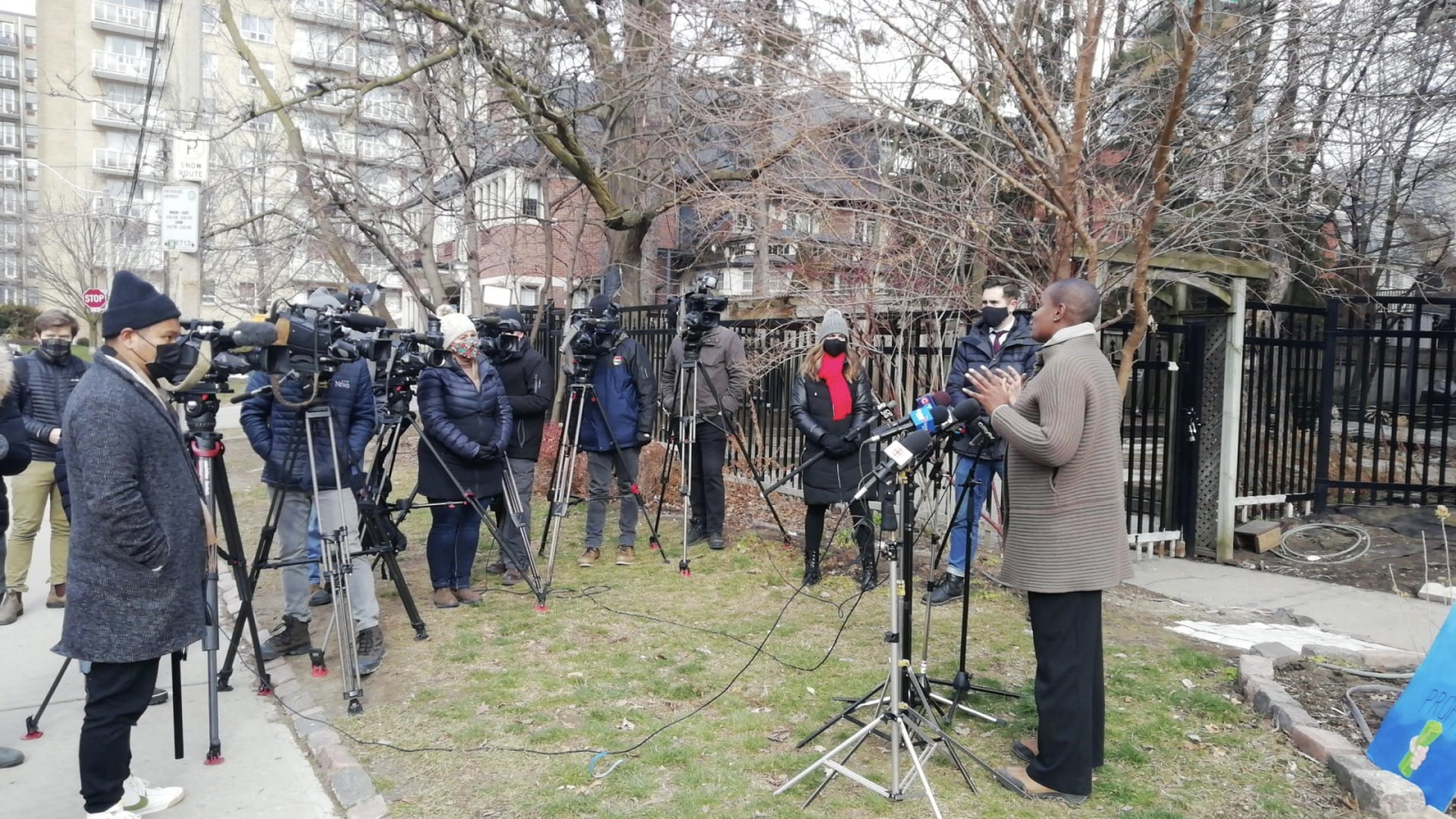 Annamie Paul has a request for federal political parties: Can they put aside partisanship for as long as it takes to see Canada through the pandemic?

With talk of an election in the news again, the federal Green Party leader said she’s hoping all parties keep in mind that Canada is experiencing a second wave of COVID-19 — one showing no signs so far that it has peaked.

Ontario issued a stay-at-home order Tuesday noting widespread community transmission of the virus and support systems “on the brink of collapse,” with deaths expected to exceed first wave totals without a change in behaviour. Next-door neighbour Quebec is also under a curfew.

The federal political parties, argued Paul, need to “return to working together to make sure that we’re meeting the urgent needs of people in Canada.” Parliament can’t let itself become “so myopic in its quest for an election,” she said, “that we compromise that first and foremost duty.”

“I am hoping that the government, before it decides to trigger any election, will take the advice of infectious disease specialists, epidemiologists, and only call an election when it is safe to do so. Because if it’s not safe, then it’s not democratic.”

Canada was treated to a fresh round of election speculation on Tuesday after Liberal MP Navdeep Bains announced he won’t be running in the next election, and was also stepping down as a cabinet minister after heading up Innovation, Science and Economic Development Canada.

His decision prompted a cabinet shuffle that saw François-Philippe Champagne take over for Bains, among other moves. Asked Tuesday morning whether the shuffle was a signal of a coming election, Trudeau said in French, “No, it’s not necessarily a signal.”

“What (Tuesday’s) shuffle does mean is that we need the best possible team in cabinet serving Canadians throughout this crisis,” said Trudeau. “When there’s an election, our priority is to serve and stand by Canadians. We have promised to do so, and we will continue to do so.”

With talk of a federal election in the news again, Green Party Leader @AnnamiePaul said she’s hoping all parties keep in mind that Canada is experiencing a second wave of COVID-19. #cdnpolitics

‘That kind of event risks being a superspreader’

Paul ran in the Toronto Centre byelection on Oct. 26, 2020, coming in a strong second with 33 per cent of the vote to the Liberal candidate and now MP, Marci Ien.

At the time, Paul expressed concerns that the conditions for a “free and fair and democratic election” might not have been present in a city that was being hit with a wave of COVID-19, in particular two low-income and racialized neighbourhoods in the riding.

The Ontario government was facing pressure in the fall to close indoor dining and move to essential outings only, including from Toronto’s medical officer of health. But the byelections did end up occurring, with Elections Canada implementing a number of measures to protect people’s health and safety.

“I haven’t seen anyone counter what I said, which is that that kind of event risks being a superspreader (event), and it also risks depressing turnout for the elections in a riding that is particularly proud of having a high voter turnout,” argued Paul.

Last October, Canada's chief electoral officer Stéphane Perrault submitted a report to Parliament recommending temporary changes to the elections law that would allow for greater flexibility in holding votes during the pandemic.

The Liberals introduced Bill C-19, An Act to amend the Canada Elections Act (COVID-19 response), on Dec. 10 in the House of Commons, where it received first reading.

The bill, which would move to weekend voting and offer more vote-by-mail options, among other changes, will have to be passed upon Parliament’s return Jan. 25.

The first 100 days: ‘We really tried to do all the things that you would do’

Paul was chosen as the Green Party’s leader on Oct. 4, or 100 days ago as of Jan. 12. During this time, Paul has had to establish all the connections new leaders need to forge, while also navigating public health restrictions in a pandemic.

She says she learned a lot about how to connect virtually with people during the party’s leadership race, as it too mostly occurred within the context of the pandemic. “That helped — we haven’t had to start from scratch in that respect,” she said.

“We were really committed to getting going right away, so we’ve done a lot of stakeholder meetings virtually — I think we’ve probably done about 90 of those. We did a lot of media as well, of course virtually,” said Paul. “We really tried to do all the things that you would do classically during the (first) 100 days.”

Not having a seat in Parliament, in fact, has turned out to be “extremely useful” under the circumstances, said Paul, because she was free to conduct more outreach and meetings than she otherwise might have been able to do.

During the last few months, Paul has made headlines advocating for the Canada Revenue Agency to suspend requests for repayment from Canadians after many were left stunned that they would need to pay back all the money they got from the Canada Emergency Response Benefit (CERB).

After denying that they changed the rules, the CRA admitted last month that “communications on this topic were unclear” and the Union of Taxation Employees acknowledged its call centre agents had been given wrong information about how Canadians would be assessed for CERB eligibility.

Paul has also sounded the alarm on long-term care homes, calling on officials to better protect residents, and has been a consistent critic of the federal government’s environmental policies as too weak. She recently called Trudeau’s commitment on biodiversity “piecemeal” and inadequate.

On these and other issues, Paul has been able to draw on her team in Parliament: Fredericton MP Jenica Atwin, Nanaimo-Ladysmith MP Paul Manly, and Saanich-Gulf Islands MP and parliamentary leader Elizabeth May.

Paul said it was difficult to grasp how much work her three-member caucus does, trying to stay on top of issues in their ridings and being available to constituents, while also doing their homework for all the committee assignments and other parliamentary duties.