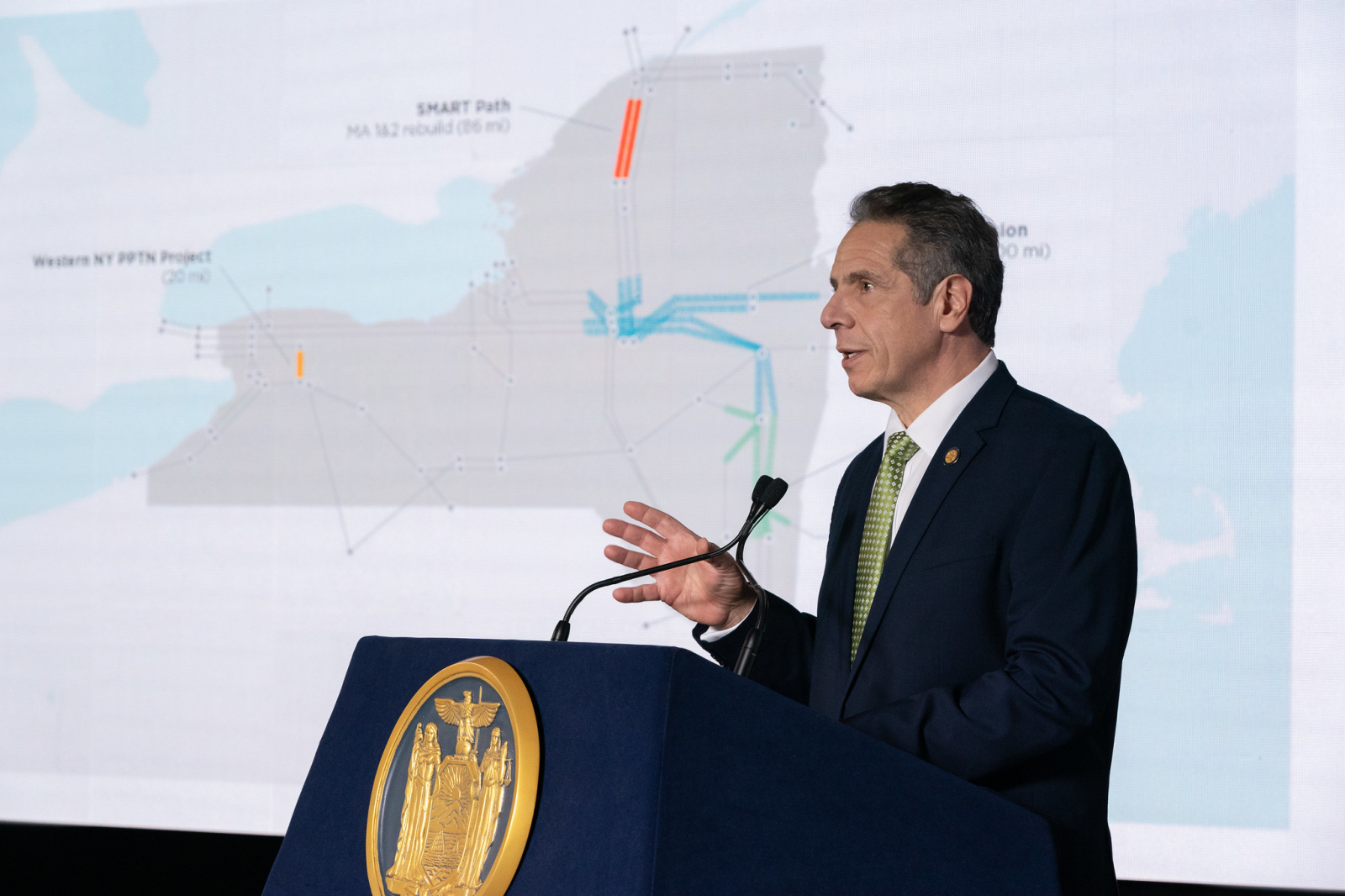 New York Gov. Andrew Cuomo stands in front of a chart showing electricity connections with Canada during his "State of the State" address on Jan. 13, 2021 in Albany, NY. Photo by Don Pollard / Office of Governor Cuomo
Previous story
Next story

The provincial utility said it would participate in a solicitation announced by the governor on Jan. 13 for “transmission arteries to bring renewable energy from upstate and Canada” to the Big Apple.

During his “State of the State” address Wednesday, Cuomo unveiled plans for a 400-kilometre, $2.5-billion “Green Energy Transmission Superhighway,” part of a larger strategy to foster a “green economy” in the Empire State.

The governor characterized the state transmission grid as “antiquated,” and said it was leading to “bottlenecks,” which he argued were ultimately passed on to New Yorkers as “congestion costs” on their utility bills.

The transmission plan, said Cuomo, would “create opportunities to maximize the use of renewable energy for the parts of the state that still rely on polluting fossil-fuel plants.”

Canada & #NewYork have been energy partners for 100+ years—we know #climate knows no borders.

Today’s announcement by @NYGovCuomo to use additional Québec #hydropower will help our two countries build back better, cleaner & stronger.

This is the way to a carbon neutral economy. https://t.co/PUwsOsPgFQ

Cuomo’s plan is the latest push in a years-long public and private effort to connect more of Canada’s abundant and largely non-emitting electricity with New York City — the most populous city in the United States — and the neighbouring Long Island region. The two regions collectively eat up two-thirds of the state's power demands.

Meanwhile, in the private sector, Transmission Developers, a subsidiary of the Blackstone Group, has been proposing the Champlain Hudson Power Express, that would run a 536-kilometre high-voltage line under Lake Champlain and the Hudson River.

Organizations have faced opposition, however, as to whether hydropower is as non-emitting as once previously thought, as well as questions over the best route for any transmission lines and whether they would interfere with wilderness.

Riverkeeper, which advocates for clean water in the state, has raised concerns that the Quebec utility would have to create new hydro dams in order to provide enough power to New York City.

Hydro-Québec spokesperson Lynn St-Laurent told Canada’s National Observer that the utility was “in a position, today, that it can serve new contracts without new build-out of hydropower facilities.”

She also noted that New York’s expansion of its Clean Energy Standard in October 2020 meant that “all forms of hydroelectricity, including hydro from Québec, are recognized as clean and renewable sources.”

St-Laurent said the utility welcomed Cuomo's announcement. “Hydro-Québec will participate in the solicitation that was issued by the state, and will offer its full support to New Yorkers in achieving their decarbonization goals,” she said.

“A new transmission interconnection between Québec’s hydropower system and New York City can lead to extensive environmental and reliability benefits for New York.”

And the governor plans to build “nearly 100 renewable energy projects,” from solar farms to onshore wind farms, and one hydroelectric facility. New York is also looking at deploying storage technologies, such as large-scale battery storage.

Asked how it saw the “power express” project working in relation to the governor's public push for transmission lines, Jennifer Laird-White, vice-president of external affairs at Transmission Developers, said the company has “long been dedicated to the development of privately funded clean energy transmission.”

“We commend Governor Cuomo's bold commitment to reducing pollutants and improving public health by investing in important green infrastructure that will diminish our dependence on fossil fuels while creating thousands of clean energy construction jobs for New Yorkers,” said Laird-White.

It's really disappointing to

It's really disappointing to see New York pressing to use surplus Quebec Hydro Power while Ontario is planning to increase use of natural gas fired power stations to enable refurbishing nuclear power stations.
Why can't Ontario work with Quebec, and build out the inter-provincial transmission infrastructure.
The Ontario Clean Air Alliance reports that "he GHG pollution from Ontario’s gas-fired power plants will increase by more than 300% by 2025 as the province uses gas to replace aging nuclear plants. If this occurs, Ontario will lose 35% of the pollution reduction benefits it achieved by phasing-out its dirty coal plants."

Why can't Ontario . . . because Doug Ford is fundamentally against renewable energy, far as I can tell.

Why did Ontario turn down

Why did Ontario turn down Hydro Quebec’s offer: 4 cents per Kilowatt Hour?
We need to develop an interprovincial hydro transmission grid.