Movies about us in lockdown, wars of the future, and Marvel's sitcom vision 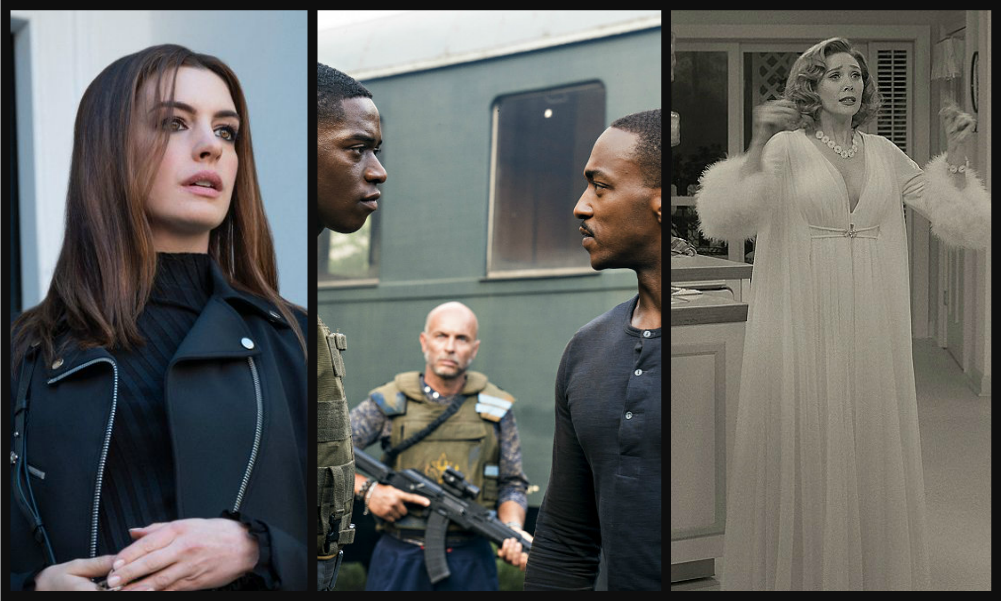 We knew it would come. COVID-19 was sure to get into the movies. Songbird was first, and not critically popular, and now we have the second. Locked Down disregards the deaths and the fear and looks at how our daily lives have been impacted. And then it offers an unusual way out. It’s yet another big-screen movie with big stars sent to a streaming service. Another movie this week has the same big-screen feel, and a third is too strange to fit the usual patterns.

Here are all the new ones I have this week...

Climate of the Hunter: 2½

LOCKED DOWN: A lot of movie recommendations these days seek to take your mind off COVID-19. Not this film. Instead of escape, you watch people put up with it. You feel the restrictions and boredom. You watch online meetings and laptop chats and bristling arguments between two people (played by Anne Hathaway and Chiwetel Ejiofor) who no longer want to be together, but are stuck cooped up for the time being. He’s morose; complains about “the psychological hell-chain … the screw of isolation.” She’s “disgusted” with her management job after being ordered to lay off her best people (via Zoom, of course). The film’s depiction of life right now is accurate and timely, except the 7 p.m. pot-banging is still going on. Maybe it lasted longer in London, where this film is set.

Their relationship is the story for half the movie, which then evolves into a heist caper through an improbable twist. She, by her boss played by Ben Stiller, and he, by a one-time job offer from Ben Kingsley, are assigned to transport a valuable diamond out of Harrods' department store for insurance reasons. They debate for a long time, but in line with small comments sprinkled around about capitalism, heartless bosses and the “unpleasant” tyrant buying the diamond, plus their own memories of a rebellious past, they go ahead and try to steal it. The heist, actually filmed in the iconic department store, isn’t as tense as it should be and also relies on improbabilities. The film itself is overly talky, but cleverly written and well-acted by the two leads and everybody they meet. It entertains well. (Crave) 3 ½ out of 5

LOVE SARAH: This is more in line with the usual escape plan from these dreary times. It’s a comedy with heart, also set in London, about three women who open up a bakery in the Notting Hill district. Sarah, of the title and of the shop’s name, wanted to do that, but died in a cycling accident. Her daughter (Shannon Tarbet), mother (Celia Imrie) and best friend (Shelley Conn) are motivated by her memory, and a costly lease, to fulfil her dream. When mom’s ex-boyfriend (Rupert Penry-Jones) arrives and shows he can bake classic French pastries, they’ve got a shop.

What they don’t have are customers. The pastries are too grand for the neighbourhood. Celia, as the grandmother, comes up with a clever solution and there’s encouragement from a neighbour (Bill Paterson) who watches from across the street. There are wrinkles, though. Is the former boyfriend ready to bail for a bigger shop? Is he the daughter’s father who was never identified on the birth certificate? Will the grandmother’s tendency to be rude cause problems? It’s pleasant stuff, directed by Eliza Schroeder, and a good light diversion. (Available digitally and on demand.) 2½ out of 5

OUTSIDE THE WIRE: Action fans, you’ll like this one. It’s the kind of film you get almost every summer, with plenty of exciting fisticuffs, shootings, explosions and international intrigue. The politics are trite and the science is unbelievable, but there’s a strong message (anti-war, if you can believe it) and a word rarely used in films like this: compassion.

It’s also a buddy movie as a young lieutenant (Damson Idris) is sent to work with a Captain Leo (Anthony Mackie) who, he’s told, is not like the rest. Turns out he’s a “4th generation biotech,” an android so advanced you can’t tell him from a human being. He gives orders like one, insists he outranks his new partner and takes tight charge of their operation. They have to deliver cholera vaccine to a battle-heavy region of Eastern Europe during a civil war. (It’s the year 2036 and the film has more than a bit of an attitude of American exceptionalism.) On the mission, they also have to find an arms dealer who has the nuclear launch codes that came free when the Soviet Union collapsed. That invokes a threat that movies like this often deal with, but here it comes with a surprising twist and a strong message. Don’t mistake it, though. It’s the action you come for. Both the director Mikael Håfström and Anthony Mackie are adept at it. (Netflix) 3 out of 5

WANDAVISION: I don’t think we had a Marvel movie all last year, did we? There are some waiting, but first we get this oddity. A Marvel sitcom, looking and sounding much like I Love Lucy in the early going, and other eras of TV comedy in later episodes, each about a half hour long and some filmed in front of a live audience. That gives you that familiar canned laughter sound along with a very detailed replica of the style and ambience of these shows. The series starts in black and white and adds colour gradually in episodes two and three.

You have a suburban couple, a nosy neighbor, the wife’s best friend, a gruff boss at the husband’s work and interactions with the community. But this couple are Marvel characters. Wanda (Elizabeth Olsen) and Vision (Paul Bettany) have been in a number of the Marvel movies, including the big one — Avengers: Endgame. The cognoscenti will remember that Vision died in one. Twice. No matter. Here they are seeking a normal life in suburbia. She’s perky and can levitate the dishes and the turkey (when the boss and his wife come for dinner). He’s optimistic and a very good magician as he shows at a school fundraiser talent show. Most of the time, they have to work hard just to hide their superpowers. That’s the source of most of the humour and the tension, neither of which are particularly strong. The predicaments Lucy got into were far more elaborate and funny. They built, and built inexorably. These, in this series, are mild. But the feel and look is beautifully recreated. IMDb says it’s the most expensive TV series in history. (On Disney +, Episodes 1 and 2 start today, Jan. 15.) 3 out of 5

CLIMATE OF THE HUNTER: This is an art house variation on the horror movie genre. It doesn’t deliver scares or blood, just mystery, and in a chatty erudite way at that. The central character delights in quoting Baudelaire and others. And is he a vampire? He gags at the tiny bit of garlic in a salad and looks just like Christopher Lee when he sleeps. But we’re not sure, and Ben Hall plays him with grace.

Two sisters (played by Ginger Gilmartin and Mary Buss) are vying for his affections when he visits them at a woodsy home. His son has no love for him and a dishevelled backwoods type with the odd name BJ Beavers offers dire warnings. One of the sisters was diagnosed with delusional disorders years before and may be the cause of the mystery today. The film is stylish and develops a strong and ominous atmosphere. I can’t tell, though, whether it’s an homage to horror styles of a few decades ago or a campy, ironic critique. It’s a stylish puzzle from director and co-writer Mickey Reece. (Available digitally and video on demand.) 2½ out of 5

BRIGHT HILL ROAD: The horror is stronger in this one filmed in Alberta, but set on the road somewhere on the way to California. That’s where Marcy, played by Siobhan Williams, checks into a remote hotel after escaping a shooting at her workplace. Things don’t get easier, though. She hears clunks and bangs and fists pounding on doors. The owner says they’re nothing, just “eternity moving through the world.” Marcy doesn’t take that; becomes convinced a man in another room is trying to kill her and tries to persuade anyone to believe her.

Is she delusional? She says there’s a different person inside her, and gradually horrid details of her life are revealed. She may, in fact, be the architect of her problems. She has quit drinking and that may be causing hallucinations. But we’re not sure. And writer Susie Moloney and director Robert Cuffley keep us guessing while spinning a tale like a dream, full of angst and creepy mystery. I enjoyed this one. (Available on demand and digital on iTunes, Amazon, Google Play and others,) 3 out of 5