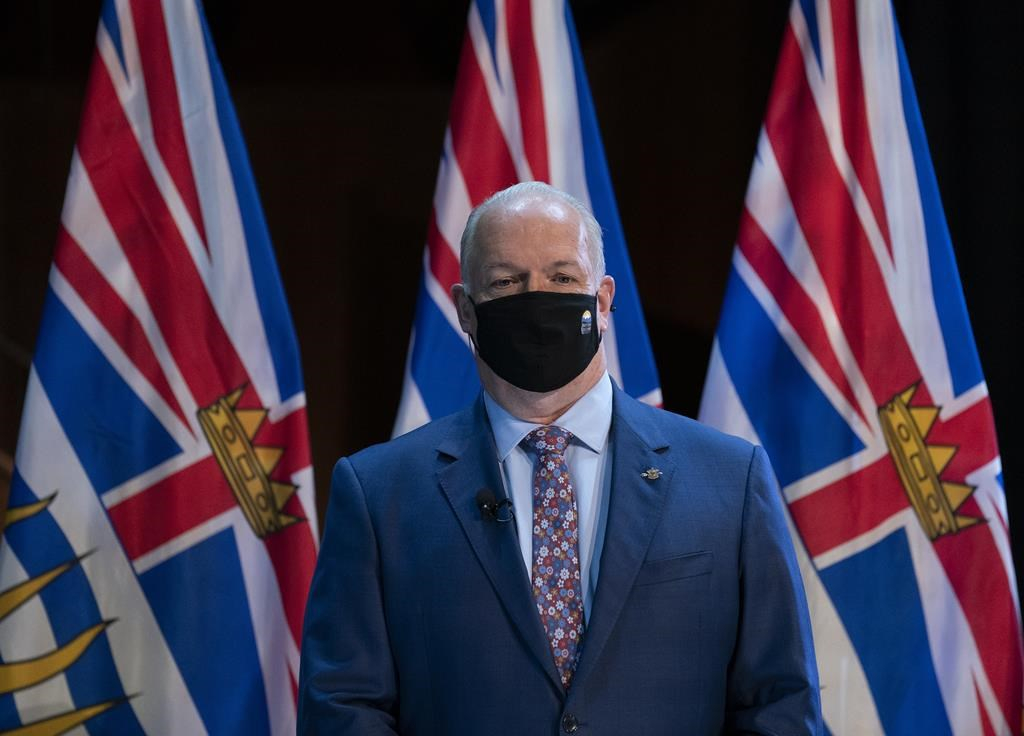 B.C. Premier John Horgan wears a protective face mask to help prevent the spread of COVID-19 before being sworn in during a virtual swearing in ceremony in Victoria, on Thursday, November 26, 2020. File photo by The Canadian Press/Jonathan Hayward
Previous story
Next story

The B.C. government is seeking legal advice on whether it can limit non-essential travel to the province during the pandemic, the premier says.

Premier John Horgan told a news conference Thursday there is concern about people coming from other provinces or territories and spreading COVID-19.

Horgan said he and other premiers have made the case for Canadians to stay home during the pandemic, but people continue to travel. The issue has been discussed for months and it's time to determine if the government can act, he added.

"I want to put this either to rest, so British Columbians understand we cannot do that and we're not going to do that, or there is a way to do it and we're going to work with other provinces to achieve it."

Public health orders issued by provincial health officer Dr. Bonnie Henry, which are in effect until Feb. 5, tell B.C. residents not to travel for vacations, recreation or social visits.

The Atlantic provinces formed a bubble that required people from outside the region to get approval before travelling there, but Horgan said a similar plan might not work for B.C.

"There's only a few ways in or out and it's easier to manage than it would be here in B.C.," he said.

Henry said during a COVID-19 briefing Thursday that she did not believe she had the authority to limit out-of-province travel nor was she considering adding such orders.

"It's hard to see how that is feasible in British Columbia for many reasons," she said. "Our borders are very different, we have many ways that people can cross — particularly from Alberta — and we know that there are many services and workplaces that people live in one or the other province and move back and forth."

Health Minister Adrian Dix said it's important to remember that as B.C. examines the legality of limiting travel, residents need to think of their own actions.

"This applies to British Columbians travelling there. We have an obligation as well not to engage in non-essential travel to other provinces," he said.

The B.C. government is seeking legal advice on whether it can limit non-essential travel to the province during the #pandemic, the premier says. #bcpoli #Covid19

The B.C. Centre for Disease Control lists 39 COVID-19 public exposures on flights coming into B.C. from other provinces between Dec. 31 and Jan. 8.

Big White Ski Resort, which has reported more than 130 COVID-19 cases among staff members and locals, cancelled all non-local bookings until Feb. 5 as a result of Henry's orders.

Michael Ballingall, Big White Resort's senior vice-president, said in a statement that the company was encouraging visitors from around Canada to follow the provincial health guidelines.

"Following the rules is not about the bottom line, it’s about bending the curve and staying open for our season passholders and local skiers and snowboarders," he said.

Limiting interprovincial travel and the advice received by legal experts will be discussed during the NDP government's virtual cabinet retreat over the next two days.

The desire to seek legal clarification also comes after politicians and public figures across Canada travelled outside the country around Christmas.

No B.C. provincial politicians travelled during the holiday season, Horgan said, but he understands the issue of international travel is frustrating to British Columbians.

"I think that we've tried our best to appeal to people's common sense," Horgan said about discouraging travel. "Those are individual choices at the end of the day, there's no prohibition in terms of a legal requirement."

The B.C. government was one of the first in the country to push for stricter international border measures, he added.