The future's too warm for baby sharks, study finds 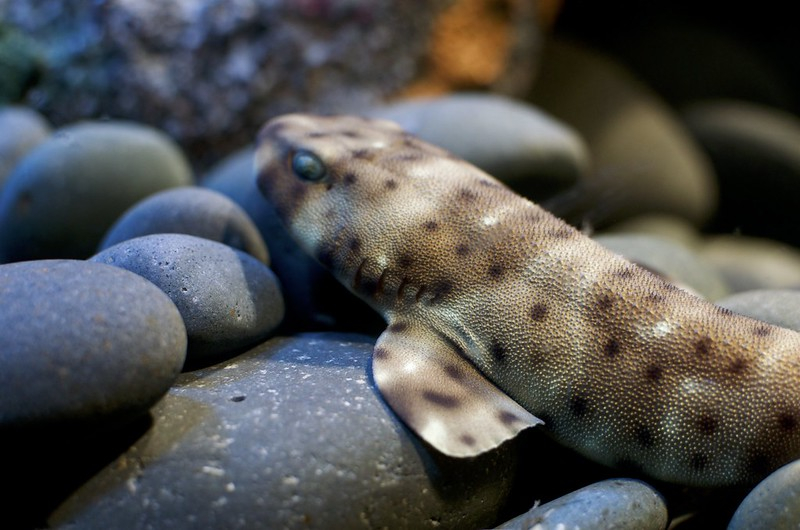 Epaulette sharks grow to about one metre and live in the shallow waters of the Great Barrier Reef. Females lay leathery egg cases, known by some as a “mermaid’s purse.” Photo by City.and.Color / Flickr (CC BY 2.0)
Previous story
Next story

Baby sharks will emerge from their egg cases earlier and weaker as water temperatures rise, according to a new study that examined the impact of warming oceans on embryos.

About 40 per cent of all shark species lay eggs, and the researchers found that one species unique to the Great Barrier Reef spent up to 25 days less in their egg cases under temperatures expected by the end of the century.

The extra heat caused embryonic epaulette sharks to eat through their egg yolks faster and when they were born, the rising temperatures affected their fitness.

“This is a huge red flag for us,” said Dr. Jodie Rummer, an associate professor at the ARC Centre of Excellence for Coral Reef Studies at James Cook University and a co-author on the study.

Weaker sharks were less-efficient hunters, Rummer said, which could then have a knock-on effect across the coral reefs where they live, upsetting the balance of the ecosystem.

“Sharks are important as predators because they take out the weak and injured and keep the integrity of the population strong,” Rummer said. “Healthy coral reefs need healthy predators.”

Epaulette sharks grow to about one metre and live in the shallow waters of the Great Barrier Reef. Females lay leathery egg cases, known by some as a “mermaid’s purse.”

Researchers monitored 27 epaulette egg cases at the New England Aquarium in Boston. Some were reared in waters at 27 C — a current average summer — and two other groups were reared at either 29 C or 31 C.

Because the egg cases are translucent, researchers can see the sharks developing and how quickly they are eating the egg yolk. Warmer temperatures saw them eat the yolk faster.

In normal temperatures, the sharks emerged from the egg cases after 125 days. But in 31 C waters, they emerged after 100 days. The researchers also measured the fitness of the baby sharks, and found that it peaked at 29 C, but then fell sharply at 31 C.

The study, published in the journal Scientific Reports, presented a “worrying future” because many sharks were already under threat. #oceans #climatechange #climatecrisis

Lead author Carolyn Wheeler, also at James Cook University, said: “The hotter the conditions, the faster everything happened, which could be a problem for the sharks.”

She said the results of the study, published Jan. 12 in the journal Scientific Reports, presented a “worrying future” because many sharks were already under threat.

A study of tropical reef sharks released last year found they were likely to become functionally extinct on about 20 per cent of reefs around the globe.

Rummer said: “This is just one species, but we have been studying them since 2012. They’re pretty tough because they have to endure fluctuating conditions on the reef flats that are really challenging already.”

She said studies looking at ocean acidification and falling oxygen levels found the epaulettes could withstand those conditions, “but temperature seems to be a big problem for them.”

“If they can’t hack it, then we have big problems. We have to emphasize the importance of curbing our reliance on fossil fuels because climate change is affecting even the toughest little sharks.”

Rummer said the study suggested there were three likely outcomes for egg-laying sharks as waters got warmer.

First, they could try to populate areas with cooler temperatures, but only if they could find the right habitat.

Second, they could adapt genetically to the warmer temperatures, but this was unlikely because sharks were slow to reproduce and slow to get to sexual maturity.

“There are not enough generations that could go by for that adaptation to take effect to keep up with the way we are changing the planet,” she said.

A third outcome, Rummer said, was “these species disappear off the planet.”

She said her team was now studying the impacts of warming oceans on pregnant female sharks to see how warmer waters affected them.