To survive, Indigenous police forces need 'black belts in how to be lean' 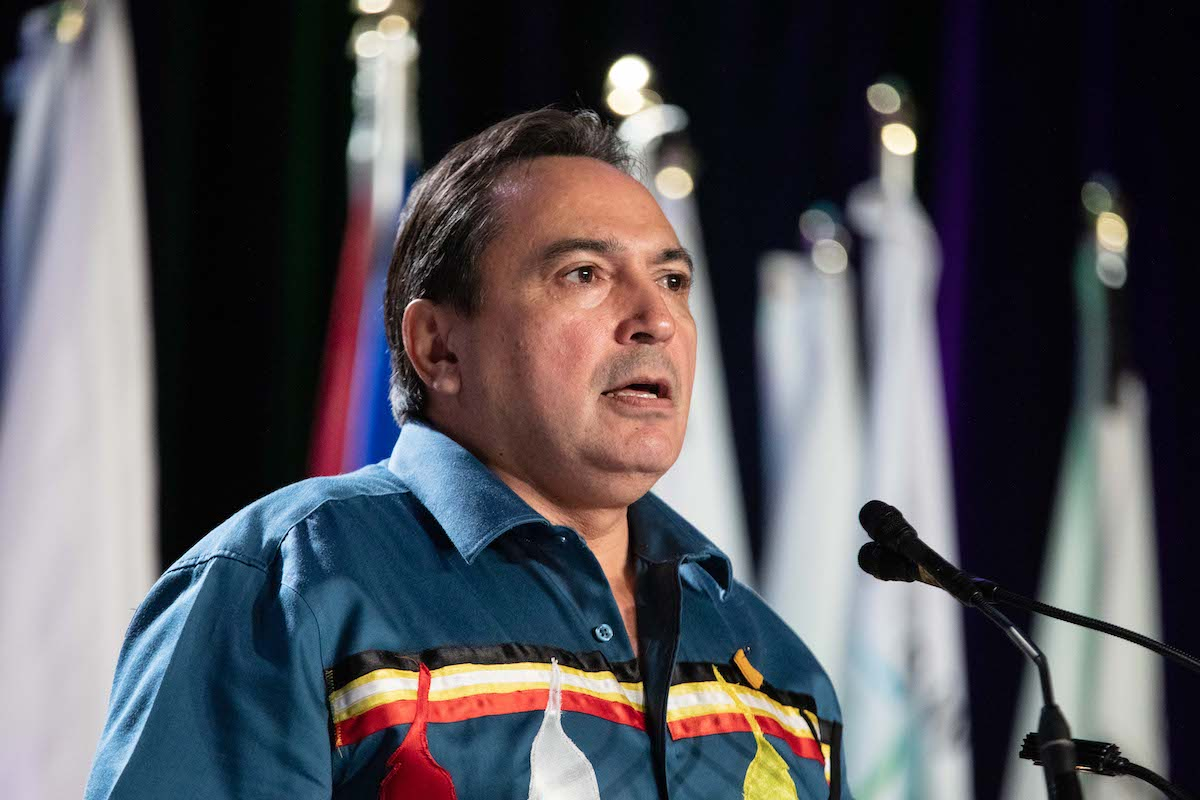 “Getting the government to admit that First Nations policing is more than just a program ... was a victory unto itself,” says AFN National Chief Perry Bellegarde. Photo by Alex Tétreault
Previous story
Next story

She has interviewed more than a thousand victims — many of them more than once.

“We’d bring them in one door, interview them, collect our evidence and then shove them out the back door with no support,” says Morrison. “Every time, my brain said, ‘This isn’t right.’”

It could take weeks for victim services to follow up and months for a trial to begin; it was the luck of the draw whether a victim would show up to testify.

In 2017, Morrison and her husband, Chief of Police Roland Morrison, developed the Survivor Assistance Support Program. With grant funding from the Ministry of the Attorney General, the year-long pilot project enlisted two female officers to transport victims to safe housing, connect them with legal services, accompany them to court and inform them if their abusers were granted bail and planned to return to their community.

When a single mother and her two young children, five and six, had nowhere to stay, Alana Morrison found them a hotel room and gave them a $100 gift card. The mother wrote her a note of gratitude, explaining that she’d never received care and attention like that before.

The program earned Morrison an award from Ontario Women in Law Enforcement. The Ontario Provincial Police called her, hoping to learn from the program’s successes. But by the end of 2018, the program was in jeopardy.

Despite the fact the Nishnawbe Aski Police Service is Canada’s largest Indigenous force, responsible for policing 34 communities across the two-thirds of Ontario north of Thunder Bay, Morrison couldn’t find anyone to bankroll the program. She applied for a number of grants, but none came through. Devastated, she had no choice but to abruptly end the program.

Morrison’s experience is common among police departments working within Canada’s First Nations Policing Program (FNPP), which doles out money year by year — 52 per cent from the federal government and 48 per cent from the provinces. Established in 1992, the program was intended to grant Indigenous people living on reserve autonomy over law enforcement.

"The only reason we haven’t failed is because our people love our communities," says the chief of one Indigenous police force. "It’s sheer determination, grit and love.” #IndigenousPolicing

From the outset, however, FNPP police services — whether they were run by communities themselves or in partnerships with regional forces — were chronically under-resourced. Because FNPP is a program and not legislation, Indigenous police forces are not considered an essential service and, therefore, not guaranteed funding. Programs and even entire police budgets can shrink without warning.

“It’s absurd,” says Naiomi Metallic, an assistant professor at Dalhousie University who specializes in Indigenous law and policy. “You don’t see other police forces in Canada in precarious situations where they’re wondering whether they’re going to have to shut their doors because they’re not getting funding.”

Indigenous policing as an essential service

That situation may soon change. In June 2020, Public Safety Minister Bill Blair announced his ministry would designate Indigenous policing as an essential service. If the legislation passes, Morrison’s force and others like it will no longer have to beg for dollars every year; they will be enshrined in law.

In December, Blair earmarked $1.5 million for the Assembly of First Nations (AFN) to consult Indigenous policing experts from across the country and start drafting legislation.

“Indigenous leadership needs to be at the table co-producing this with us,” Blair told CBC Radio’s Morning North in December. “After four decades of the First Nations Policing Program and the frustrations and terrible outcomes that it has produced in too many places, I understand the frustration and anger that many feel.”

“Getting the government to admit that First Nations policing is more than just a program — that it has to be seen and deemed as an essential service — was a victory unto itself,” he says. But Bellegarde predicts the legislation will move slowly, noting it took Bill C-91, the Indigenous Languages Act, three years to pass.

“This is a political process,” he says. “What happens if an election is called? Everything slows down and you can’t get the legislative process started up again for at least a year or two.”

Right now, the timing is ripe: there’s a willing government in Ottawa, and police reform is in the public consciousness. But the window to make good on Blair’s promise may not stay open forever.

“It takes legislation to make sure it’s forever and a day cemented in place,” says Bellegarde. “That way, it can’t be unilaterally cut by a new prime minister.”

In the meantime, Indigenous police services are making do with what they have. In 2018, they were responsible for serving about 440,000 people. For reference, the police department in London, Ont., serves a similar population, though it’s not a perfect comparison. London police handle their own homicide and suspicious death investigations, whereas Indigenous forces are required to offload them to the RCMP or provincial police.

But London is a medium-sized city with a single police department, and Indigenous police detachments are scattered across the country, responsible for millions of acres. Many of the 457 communities they serve are isolated, too, which dramatically increases the price of policing.

In many Indigenous communities, it’s quickly apparent that money is stretched thin. Officers often work alone, stationed in facilities that don’t meet health and safety standards — trailers sometimes double as detachments. Officers may drive aging cruisers without sirens or lights, accumulate hundreds of hours of overtime and watch unfinished criminal investigations pile up as more urgent matters pull them away.

“I’ve heard many people refer to Indigenous policing as ‘defunded’ already,” says McCaffrey. “We are black belts in how to be lean… The only reason we haven’t failed is because our people love our communities. It’s sheer determination, grit and love.”

McCaffrey hires officers who grew up in Wikwemikong. He says they know its people, culture and history, and that inspires trust.

But policing your hometown comes with challenges. In 2018, Maclean’s reported on a Nishnawbe Aski Police Service constable who had to arrest his brother and respond to the deaths or suicides of his father, siblings and cousins. The Crown eventually ordered him to stop arresting relatives to avoid conflicts of interest when they appeared in court.

As president of the Indigenous Police Chiefs of Ontario, McCaffrey is helping the AFN co-develop the legislative framework for Indigenous policing to become an essential service. He says the law should include arbitration procedures and be flexible because each community will have specific needs, values and desires. For example, while most Indigenous officers are armed, the Kwanlin Dün First Nation in Yukon maintains a peacekeeper-style police service that employs four community safety officers who don’t carry guns or lay charges.

Metallic says police oversight and accountability standards should be central to the new legislation. Until the Safer Ontario Act recognized First Nations constables as police officers in 2018, the province’s oversight bodies, the Special Investigations Unit and Office of the Independent Police Review Director, had no jurisdiction to investigate incidents involving Indigenous police.

According to a federally commissioned report that Metallic co-wrote in 2019, many Indigenous people still feel that oversight bodies are inaccessible, that filing complaints against police is futile, and that they’d face retribution or inappropriate treatment if they did so.

Metallic also recommends that Public Safety and the AFN consult Indigenous women’s groups, given the male-dominated ranks of police services. Doing so, she says, could help avoid the mistreatment and neglect that women have experienced at the hands of police, as detailed in the final report of the National Inquiry into Missing and Murdered Indigenous Women and Girls. According to the report, “many witnesses said that they no longer felt safe to reach out to the police when they were in danger, fearing that the police themselves might also inflict further violence.”

A call to overhaul the RCMP

Bellegarde says that an essential service designation is only half of the Indigenous policing equation. The AFN is also advocating for a comprehensive overhaul of the RCMP. In the 2010s, one-third of people shot and killed by the RCMP were Indigenous. Last summer, police in New Brunswick fatally shot two Indigenous people in the span of two weeks. By contrast, since its founding 27 years ago, the Nishnawbe Aski Police Service has never shot anyone dead.

Bellegarde’s long list of demands for the RCMP include instituting a zero-tolerance policy for excessive force, mandating the use of body cameras, improving de-escalation and mental health training, ensuring more Indigenous representation on civilian oversight boards, and providing financial incentives for veteran officers to stay in rural and remote communities. Too often, he says, recruits arrive fresh out of training with no experience or connection to the community, cut their teeth and then leave.

Morrison didn’t think she’d last very long on her first assignment, either. In 2002, when she landed in the tiny fly-in Cat Lake First Nation, she thought to herself, “I’m going to die here.” Five-foot-six and 130 pounds, she’d regularly respond to calls alone and confront six-foot-tall, 300-pound men.

Her career grew even more unnerving when she started investigating sexual crimes against children — a position she stayed in “seven years past my shelf life,” she says. Last November, she was diagnosed with post-traumatic stress disorder. “There are still a couple of painful cases that haunt me at night.”

In the early months of the pandemic, Morrison noticed a spike in reports of domestic violence. Alarmed, she decided to try to revamp the Survivor Assistance Support Program. She began the familiar process of applying for grants, hoping to restore the funding that had dried up two years earlier. To her delight, she secured $400,000 in provincial and federal financing.

Rather than police officers, the 2021 version of the program employs three social workers in Thunder Bay, Sioux Lookout and Cochrane. With an essential service designation, Morrison hopes to expand the program to more of the 34 communities under the Nishnawbe Aski Police Service’s jurisdiction. But she doesn’t have time to plan for that. She has a more pressing problem.

“We only have funding for one year,” she says. “I’m already panicking.”

Editor's Note: Five days after this story was published, Terry McCaffrey was charged by the Ontario Provincial Police with sexual assault pertaining to an incident in 2019. He intends to plead not guilty.

This story was updated to provide new information about Terry McCaffrey.

I'm tired of Indigenous people being treated like second-class citizens. Not only should their police be funded, it's worth considering expanding Indigenous police forces to cover all of Canada. Let Indigenous police replace colonialist. It could be the solution to systemic racism and infiltration of white supremacists in the police.