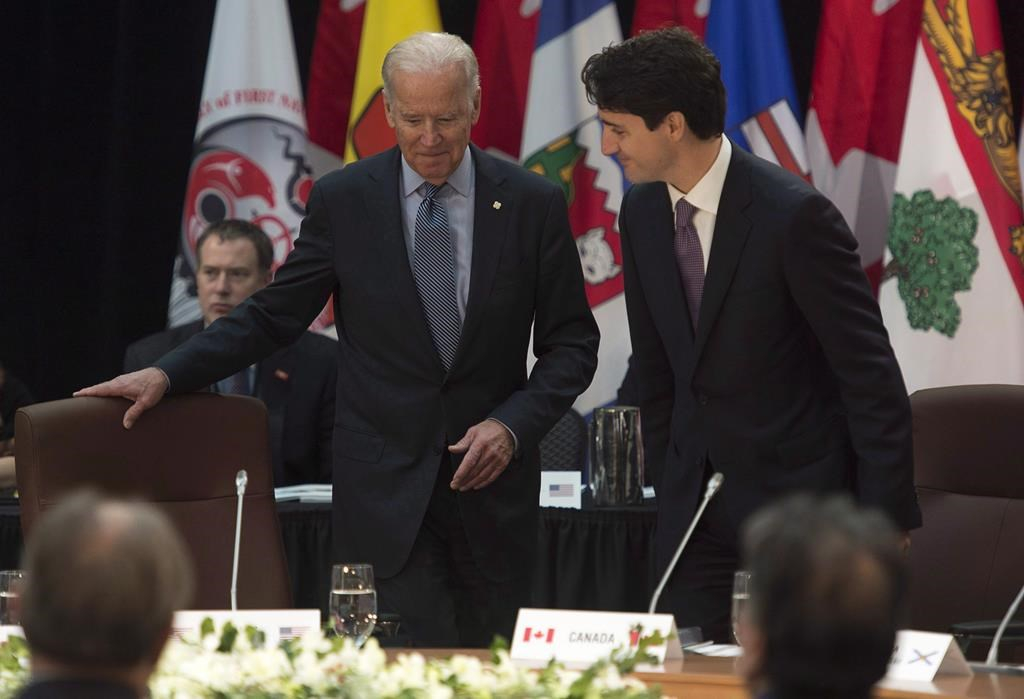 Joe Biden, then the U.S. vice-president, and Prime Minister Justin Trudeau take their seats at the start of the First Ministers and National Indigenous Leaders meeting in Ottawa in 2016. Photo by Adrian Wyld/Canadian Press
Previous story
Next story

WASHINGTON — Joe Biden's White House has a lot in common cause with Canada, Justin Trudeau said Friday as he urged people to look past the new U.S. president's decision to kill off the Keystone XL pipeline project.

The two countries have great partnership potential in the Biden era, particularly when it comes to a shared vision of tackling climate change while fuelling economic growth, the prime minister said.

"It's not always going to be perfect alignment with the United States; that's the case with any given president," he told a news conference outside his Rideau Cottage residence.

"In a situation where we are much more aligned — on values, on focus, on the work that needs to be done to give opportunities for everyone while we build a better future — I'm very much looking forward to working with President Biden."

The two leaders spoke for about 30 minutes late Friday — Biden's first phone call with a foreign leader since taking office.

Trudeau expressed Canada's "disappointment" with the Keystone decision, and Biden acknowledged the difficulties it has caused, said a federal official familiar with what was discussed.

"The prime minister underscored the important economic and energy security benefits of our bilateral energy relationship as well as his support for energy workers," says the readout of their conversation released by the Office of the Prime Minister.

"The prime minister and president reiterated the urgent need for ambitious action on climate change, reaffirmed their commitment to the Paris Agreement, and agreed to work together on net-zero emissions, zero-emissions vehicles, cross-border clean electricity transmission, and the Arctic."

By and large, the tone of the call was "overwhelmingly positive," said the source, who spoke on condition of anonymity in order to discuss details of the call.

#Trudeau and #Biden met today and the cancelled #KeystoneXL pipeline permit was the elephant in the room. #cdnpoli

The leaders agreed to continue to discuss Canada's concerns about an issue that the two sides have been discussing for months, and will continue to talk about as the administration finds its feet, the source suggested.

Biden and Trudeau also agreed to meet next month, although it's not clear given the circumstances of the COVID-19 pandemic what form that meeting would take.

Earlier Friday, Trudeau said the federal government would be there to support oilpatch workers in Alberta and Saskatchewan who have been hurt by Biden's decision.

But there's little doubt the fight is far from over, particularly if Alberta Premier Jason Kenney has anything to say about it.

"The United States is setting a deeply disturbing precedent for any future projects and collaboration between our two nations," Kenney wrote in a letter to Trudeau he released Friday on Twitter.

"The fact that it was a campaign promise makes it no less offensive. Our country has never surrendered our vital economic interests because a foreign government campaigned against them."

Biden opposed the Keystone XL expansion as vice-president under Barack Obama, who blocked the project in 2015, and as president he still does, Psaki said.

Kenney and other champions of the project, including Kirsten Hillman, Canada's ambassador to the U.S., argue it has changed significantly since the Obama administration cancelled it five years ago.

As word emerged this week of the project's imminent demise, Calgary-based owner TC Energy revealed plans to spend US$1.7 billion on a solar, wind and battery-powered operating system for the pipeline to ensure it achieves net-zero emissions by 2030.

Kenney wrote Wednesday's decision came "without taking the time to discuss it with their longest-standing ally," although Hillman insists she has been in near-constant discussions with the Biden team ever since May, when they promised to cancel the project.

He called the decision a violation of the investor-protection provisions of the U.S.-Mexico-Canada Agreement and called on Trudeau to press the U.S. for compensation on behalf of TC Energy and the Alberta government.

"I strongly urge you to ensure that there are proportionate economic consequences in response to these unfair U.S. actions," Kenney wrote.

"If the U.S. is unwilling to listen, then we must demonstrate that Canada will stand up for Canadian workers and the Canadian economy."

Texas Sen. Ted Cruz accused Biden of erasing 11,000 potential jobs in the U.S. "with the stroke of a pen ... by presidential edict." Alaska Sen. Dan Sullivan said the president was "pandering to fringe activists."

Kentucky Sen. Mitch McConnell, the Senate minority leader, said the move does little besides kill jobs, "disappoint our strong ally, Canada, and reverse some of our progress toward energy security."

And Idaho senators Jim Risch and Mike Crapo both signed on to co-sponsor a Republican bill aimed at allowing construction on the project to continue, despite Biden's decision to rescind the permit.

"The Keystone project is the linchpin of America's energy independence and job creation strategy," Risch said in a statement.

"Shutting it down leaves us dependent on the likes of OPEC and Russia to help power the country and undermines the pact we made with our northern ally, Canada, which remains supportive of the project."