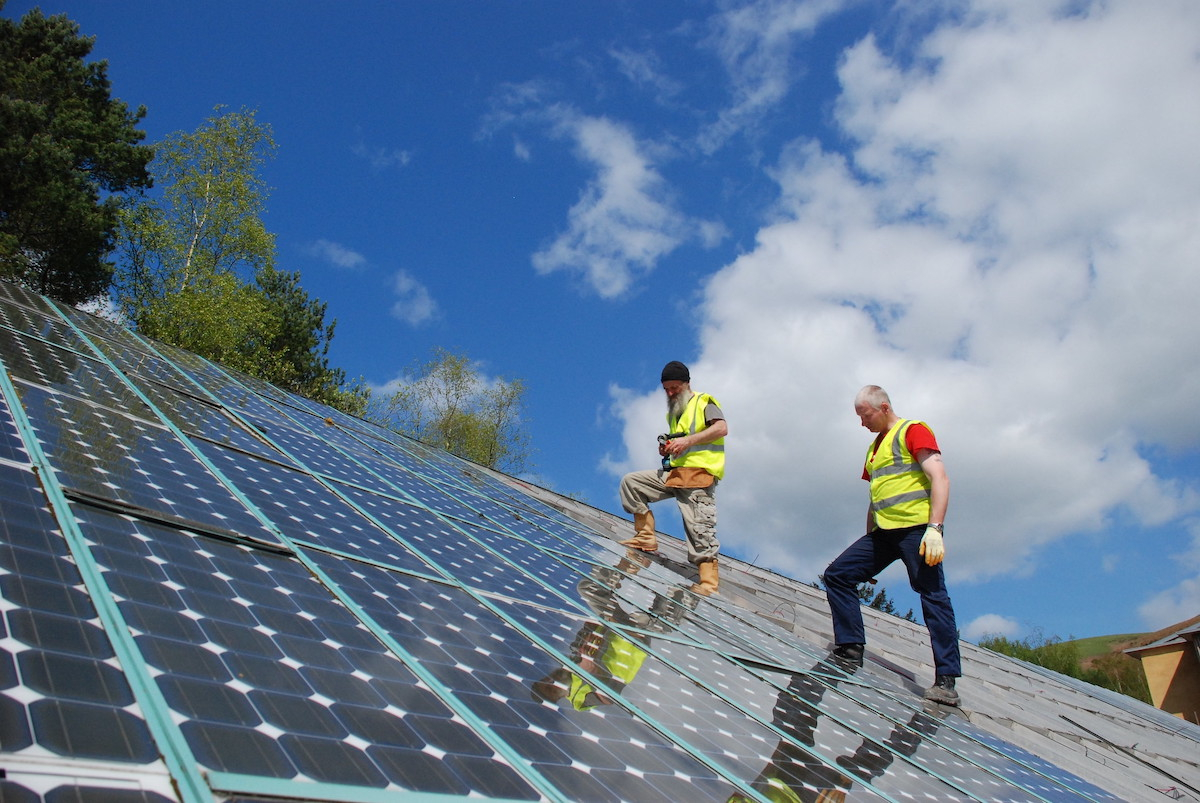 The need for a Just Transition Act has never been clearer, says 350.org's Cameron Fenton. Photo via Centre for Alternative Technology / Flickr (CC BY 2.0)
Previous story
Next story

Back in 2019, just a few days after the September climate strikes brought millions of people to the streets, Prime Minister Justin Trudeau stood before a crowd in Burnaby and laid out his party’s climate platform. Most of the speech was pretty standard: Liberal climate promises based on a vague pledge for more ambition and a contrast between its party and the Conservatives. But one promise stood out.

A little over halfway through the speech, Trudeau said that “as we move Canada forward, we need to make sure no one gets left behind.”

His solution? A “Just Transition Act, ensuring that workers have access to the training and support they need to succeed in the new clean economy.”

Trudeau wanted Canada to be “among the first countries in the world to put this idea into practice.” And, just a year ago, newly minted Environment Minister Jonathan Wilkinson told the media a Just Transition Act would be among his first moves in his new portfolio.

But since then, there has barely been a word — let alone any action — to make it happen. That needs to change.

With the Keystone XL pipeline cancelled and the Trudeau government’s own agencies casting serious doubts on how the Trans Mountain pipeline expansion project will fare as Canada implements new climate legislation, the need for a Just Transition Act has never been clearer. The world is moving away from fossil fuels, and that has serious implications for workers, families and communities across Canada. Trudeau and his government have a responsibility to make sure, as the prime minister himself said, that none of these people are left behind.

First, he needs to make a choice between moving forward on climate change or fighting to prop up a dying fossil fuel industry. The hard truth is that our governments, both in Ottawa and in the provinces, have wasted countless hours and billions of dollars backing fossil fuel projects that just don’t fit within a climate-constrained world.

Think about the billions of public dollars Trudeau is spending on the Trans Mountain project. Then, add in the public money Alberta Premier Jason Kenney dumped into Keystone XL and the billions of dollars that Canada and Alberta have pumped into lobbyists, public relations firms and lawyers to fight for pipelines that run headlong into the unforgiving physics of climate change. Now, imagine if they used all that money, and the hours wasted spending it, to roll out a just transition instead.

Second, he needs to live up to his promise to leave no one behind. The easiest way to do that would be to base a Just Transition Act on the simple idea that everyone who wants a green job gets one. In other words, Canada needs a federal jobs guarantee to be the foundation of the act. This pledge would force the government to pursue the kind of massive job creation, training and retooling programs that Seth Klein, in his book A Good War, explains will be key to a successful climate emergency mobilization. And more than that, it would ensure people, not corporations, are at the core of the legislation.

It’s time for Trudeau to wake up, writes @CamFenton of @350Canada: Canada needs a Just Transition Act — and we need it now. #cdnpoli #climate

Third, a Just Transition Act needs to be connected not just to Trudeau’s climate efforts, but his government’s proposed legislation to align Canadian laws with the United Nations Declaration on the Rights of Indigenous Peoples and tackle racial and social injustice. Simply put, if the goal of a just transition is to ensure everyone moves forward, we need to ensure those communities that Canada has typically left behind (or pushed backwards with our actions) are leading us through this transition. A Just Transition Act needs to invest first and foremost in those communities bearing the brunt of both climate change and the fossil fuel industry.

Unfortunately, at some point between 2019 and today, Trudeau’s government seems to have decided that placating fossil fuel interests is more important than a just transition. When a reporter from the Toronto Star asked about the status of the promised Just Transition Act earlier this week, Natural Resources Minister Seamus O’Regan didn’t answer the question, and instead made a statement outlining his unwavering support for the Keystone XL pipeline.

This position seems more in line with that of Canada’s biggest oil lobby group, the Canadian Association of Petroleum Producers, than with Trudeau’s 2019 promise. According to CAPP, there’s no need to plan for a transition because Canada will just keep building new fossil fuel projects. But the numbers tell a different story. According to a report published earlier this month by Environmental Defence and labour economist Jim Stanford, Canada has lost 50,000 fossil fuel jobs since 2014, and within the next two decades, the fossil fuel sector could all but disappear.

The truth is as simple as it is harsh: Like it or not, the fossil fuel era is ending. And, instead of planning to support workers, families and communities, our governments are wasting precious time and money trying to prop up a handful of fossil fuel projects that, at best, would be a few sandbags trying to hold back the ocean. It’s time for Trudeau to wake up to that reality, and keep the promise he made in 2019. Canada needs a Just Transition Act — and we need it now.

We are holding our breath to

We are holding our breath to see if Biden is truly going green or if it just a sop to the progressives. If he does what he says, Canadas bluff will be called. Pick a side Justin. ( hint: there is only one that will build a future )

trudeau will be heading off

trudeau will be heading off to Davos next week to get his economic instructions from the World Economic Forum. Pay attention canada!

What could have prevented

What could have prevented Prime Minister Trudeau from keeping his 2019 campaign promise for a fair transition? Could it be because the outcome of that election was a minority government? Or could it have been the Covid-19 pandemic which started not long afterward and has completely and properly consumed the government's full attention since then. Mr. Fenton seems oblivious to these harsh facts in his haste to take the government to task. The initiatives that he seeks will no doubt be part of the government's Building Back Better agenda, but in the meantime, Mr. Fenton should learn the value of patience and of dealing with more pressing crises first.

Trudeau’s words on climate change drop out of his mouth and then are swiftly forgotten. From his actions it is easy to see that he supports big petroleum interests and uses taxpayer’s money to do so. Why invest in Trans Mountain when not one free enterprise company would touch it? As far as climate change goes Trudeau like other PMs is an utter disgrace and disaster. Poor little rich boy, on inherited money, playing at politics. I wonder how much income tax he pays.

In Alberta, Notley hired the

In Alberta, Notley hired the largest private oil company to build windfarms and set up solar energy in the backcountry. This was largely paid for by the Liberals. Conservative Provinces wouldn't play the game. Doug
Ford for instance cancelled Ontario's long-standing cap and trade program with California. This immediately cut off 3 billion dollars of income for the province. Change because they can show you they can.