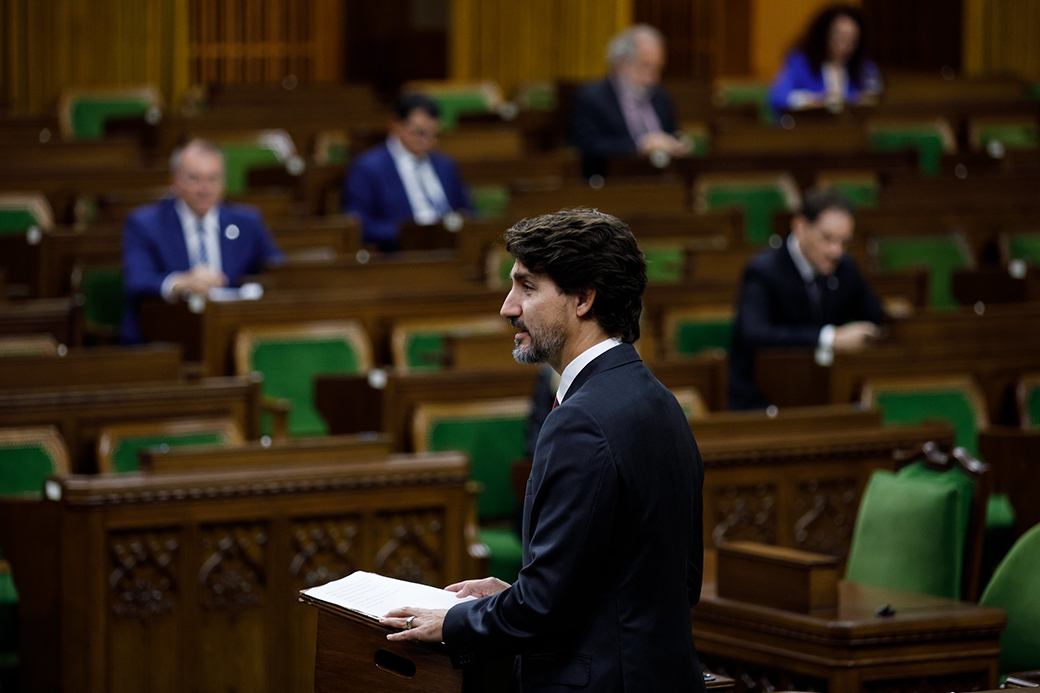 Prime Minister Justin Trudeau, seen here in the House of Commons on Sept. 24, is being criticized by opposition leaders for his government’s COVID-19 response. Photo by Adam Scotti / PMO
Previous story
Next story

Opposition leaders were quick to criticize Justin Trudeau’s handling of the pandemic on Monday — the one-year anniversary of the first presumptive case of COVID-19 in Canada.

As the country heads towards a grim milestone of 20,000 deaths, the government’s official Opposition leader, Erin O’Toole, said a smooth vaccine rollout is the “key.”

Canada has so far vaccinated about two per cent of its population with its two approved vaccines, by Moderna and Pfizer-BioNTech, but the delivery of the latter has ground to a halt as the company upscales its plant in Belgium. As a result, Canada will receive zero doses of the Pfizer vaccine this week and a reduced amount for the weeks to come.

“It is imperative we work together to improve the Liberal vaccine plan and get Canadians back to work,” O’Toole said in a press conference Monday morning.

“The prime minister has not invited other party leaders to meet and be briefed on the COVID pandemic and on the government’s response for months,” Paul said. “This is the kind of thing that prevents parties from having and presenting a united front to the public.”

Paul repeated calls for Trudeau to convene an intergovernmental COVID-19 task force to co-ordinate a national response to the pandemic. She praised U.S. President Joe Biden, who appointed a national COVID-19 response co-ordinator on his first day on the job.

Paul, who has sounded the alarm on the “humanitarian crisis” happening in long-term care (LTC) homes, is also urging Trudeau to convene a first ministers meeting to develop a plan to tackle the issue.

Meanwhile, NDP Leader Jagmeet Singh brought up the example of the 19-year-old who worked at an Ontario LTC home and died after contracting COVID-19 to push for better paid sick leave.

“This is devastating and could have been avoided if paid sick days were made more accessible,” Singh said.

Opposition parties are calling on the Trudeau government to step up its response to #COVID19 as the country approaches 20,000 deaths due to the virus. #cdnpoli

As of now, the Canada Recovery Sickness Benefit (CRSB) has some shortfalls, according to Singh, who pressured the feds to create it in September.

The CRSB gives $500 per week for two weeks to workers who can’t work because they’re sick, need to self-isolate due to COVID-19 or have an underlying health condition that makes them more prone to infection.

The program has paid out more than $287 million since it launched, according to government data, however the number of people approved to receive the benefit has been shrinking every month, from 67,600 in the first eligibility period to 21,830 in the first week of January.

Singh says there’s a lack of awareness of the benefit and wants the government to better promote it. He also wants the CRSB to be amended so that it’s easier for people to apply, for more people to be eligible and for the money to flow into people’s bank accounts faster.

Singh had an unsuccessful attempt to recall Parliament earlier than scheduled to discuss these matters but is expected to bring them forth in the House this week.

There will also be an emergency debate on Canada’s vaccine shortage Tuesday evening.

COVID-19 vaccines: Canada wrestles with helping other nations or helping itself

It's the job of the

It's the job of the opposition to oppose but we don't have to listen.
The situation would be so much worse had that other guy won. Seriously, I can't even remember his name.
Our Prime Minister has done an excellent job of taking care of his citizens.

The Prime Minister and his

The Prime Minister and his team have managed the pandemic response to the envy of other countries. Singh is a blowhard and O'Toole would have put Canadians in the same chaos as the US. God forbid he should ever become PM. Canada would be doomed.