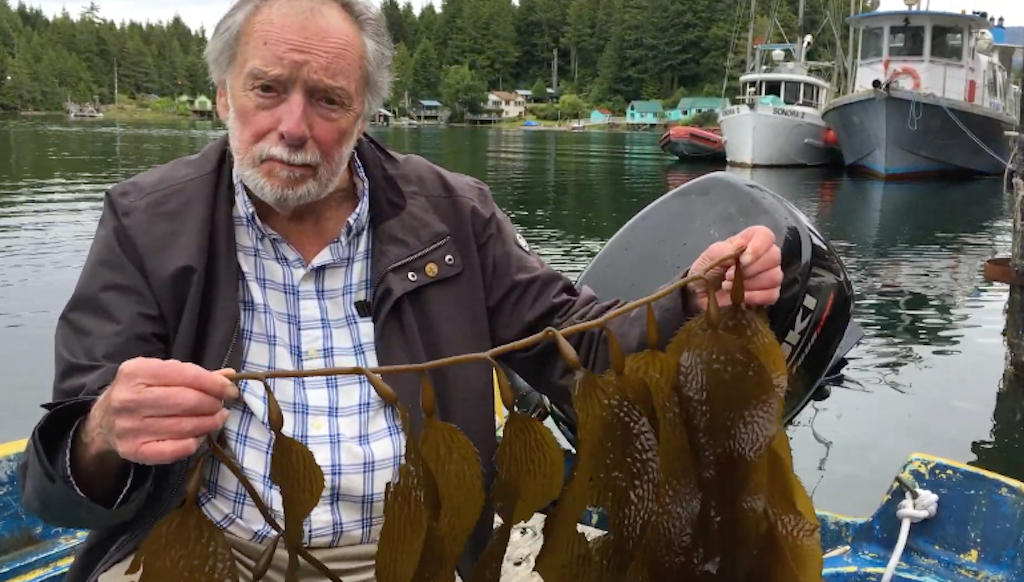 Harvesting seaweed on the B.C. coast has been the on-and-off-again dream of back-to-landers intent on subsisting on nature's bounty since the '60s and '70s.

But next to none have really ever been able to make a go of it long term, says Louis Druehl.

And he would know.

Druehl started the first commercial kelp farm in North America and now produces seed and advice for an ever-growing number of cultivators and conservationists.

In his mid-80s, the retired professor and marine biologist has been researching and growing kelp for close to four decades in the waters near Bamfield on Vancouver Island’s wild west coast.

“We’ve been farming seaweed, one way or the other, since about 1982,” Druehl said.

“And we’ve always sputtered along. And I mean sputter, we didn’t (even) putter along.”

But recently seaweed has become “a really big deal,” Druehl said. “I’d like to say it’s because of me, but I don’t know that’s true,” he said, laughing.

Investment and interest in farming seaweed on the B.C. coast, as well as in North America and Europe, is reaching a fever pitch.

Investment and interest in farming seaweed on the B.C. coast, as well as in North America and Europe, is reaching a fever pitch. “The biggest single threat to the business is not being able to grow fast enough,” says Bill Collins of @CascadiaSeaweed.

The economic potential of an expanded seaweed market in Europe could tally €9 billion in just a decade, all while creating more than 100,000 jobs and delivering both environmental and health benefits, according to a recent report by the Seaweed for Europe Coalition.

Many science, industry and investment stakeholders support seaweed aquaculture as a potential means to grow a sustainable super food that benefits the economy and environment.

Seaweed is a sustainable, plant-based nutritional food that gets its nutrients from surrounding waters while potentially capturing carbon and contributing to ocean regeneration, he said.

“When we looked into it, the opportunity was tremendous. And we asked ourselves, 'Why hasn't it happened before?'” Collins said.

Rising concern around impacts of climate change and the corresponding interest in plant-based foods means North American consumers are ready to consider seaweed as a fresh or dried whole food item — whether it be in salads, soups, dried snacks, as a vegetable dish or mixed into bread or plant-based burgers, he said.

The time is ripe to shift seaweed aquaculture from a small, cottage-based industry to a large commercial scale for a number of reasons, Collins said, adding Cascadia’s seaweed food products should be on the shelves by summer 2021.

But to shift the North American palette to a food item long eaten in Asia and by First Nations — and make seaweed products available beyond the confines of specialty health food stores — growers must produce enough to consistently supply food chain companies and grocery market selves, he added.

“We have to pay way more attention to our climate and our planet as we create food,” Collins said, adding the company is currently growing sugar kelp (Saccharina latissima) and winged kelp (Alaria marginata), similar to the Japanese-grown wakame seaweed.

But the company is also doing research on B.C. seaweeds as potential sources of cattle feed and bioplastics, he said.

The company has teamed with coastal First Nations communities interested in seaweed cultivation as a sustainable means for economic development, Collins said.

Cascadia has partnered with Nuu-chah-nulth Seafood on the west coast of Vancouver Island and the Klahoose First Nation on Cortes Island, located in the inner passage along B.C.’s mainland.

The company and its partners expect to harvest at least 100 tonnes of kelp out of the waters this April, with 20 per cent from the two farms near Cortes and the remainder from the waters near Bamfield following a six-month winter growing season, Collins said.

However, the biggest obstacle hindering the expansion of seaweed aquaculture is the length of time it takes to secure licences from the federal and provincial governments and agencies, Collins said.

“The biggest single threat to the business is not being able to grow fast enough,” he said.

“The government has told us they want to improve and they have, but we need a wholesale commitment from government if we’re going to expand at the rate that we need to service the market.”

Part of the overall problem is there aren’t enough resources dedicated to processing aquaculture tenure requests, which typically evaluate the impacts of raising animals in the ocean, Collins added.

“The process is adapted for animals, which you have to be way more cautious with,” he said.

Additionally, most of the policy framework from the province focuses on the wild harvest of seaweed rather than cultivation, Collins added.

Tenure licences for aquaculture operations are processed by the B.C. Ministry of Forests, Lands and Natural Resource Operations (FLNRO).

Before issuing licences, regulators evaluate the locations to ensure they don’t conflict with other land uses such as parks or natural reserves.

First Nations are consulted and public comments are considered to establish whether the tenure is the “highest and best use of the land,” the ministry said in an email.

Tenure holders must also submit a management plan indicating what infrastructure is on site and how and what species will be cultivated and harvested, along with estimated production yields.

Druehl said given kelp operations have relatively low impacts to the marine ecosystem, in his experience, most resistance to seaweed farm operations comes from recreational boaters, fishermen and kayakers.

“We actually have two crops. One is the kelp, and the second one is fishing lures.”

Some other potential impacts to consider might be negative interactions with marine mammals or really dense seaweed operations robbing nutrients from the surrounding waters, Collins said.

Cascadia minimizes the amount of equipment it deploys in the water and would work to avoid areas that might endanger wildlife, Collins said.

And given the vast amount of coastline in B.C., no operation is likely to pull enough nutrients from flowing waters to endanger other marine life, he added.

“We want to do this in harmony with the environment,” Collins said.

“So as our industry improves and grows so, too, will our efforts to ensure that we identify the risks and accommodate them.”

Sounds pretty great... perhaps this effort should be linked with fish farms being phased out -- transition the workers and their tools to this growing and important industry.