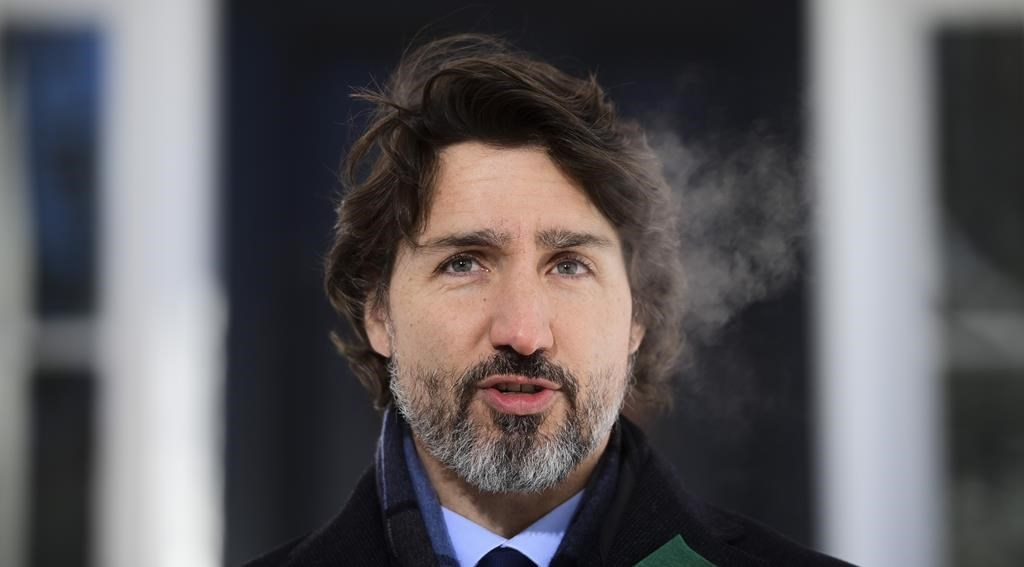 Prime Minister Justin Trudeau holds a press conference at Rideau Cottage in Ottawa on Friday, Jan. 29, 2021, to provide an update on the COVID-19 pandemic. THE CANADIAN PRESS/Sean Kilpatrick
Previous story
Next story

Prime Minister Justin Trudeau said the new restrictions are meant to discourage non-essential travel to all destinations and reduce the spread of more infectious variants that could send domestic case counts soaring.

"With the challenges we currently face with COVID-19, both here at home and abroad, we all agree that now is just not the time to be flying," Trudeau said Friday from outside Rideau Cottage.

"By putting in place these tough measures now, we can look forward to a better time when we can all plan those vacations."

Trudeau said all arrivals to Canada will have to quarantine in an approved hotel for up to three days at their own expense while they await results of a COVID-19 test taken at the airport.

He said that requirement, set to take effect "in the coming weeks," could cost each traveller more than $2,000 and is in addition to the already mandatory pre-departure COVID-19 test.

Those with positive tests will isolate in designated government facilities, while those with negative results can serve the rest of the two-week quarantine at home.

Tam said the quarantine order also applies to people who have already been vaccinated, noting ongoing uncertainty about whether this group can still transmit the virus. However, that could change, she allowed.

"It is an area of active discussion," Tam said.

"With the challenges we currently face with COVID-19, both here at home and abroad, we all agree that now is just not the time to be flying," Trudeau said Friday. #COVID #cdnpoli

Trudeau said Air Canada, WestJet, Sunwing and Air Transat will suspend service to all Caribbean destinations and Mexico starting Sunday until April 30. Starting next week, all international passenger flights must land at only four airports — in Vancouver, Toronto, Calgary and Montreal.

Airlines will help arrange the return of customers currently on a trip, Trudeau said.

Trudeau said containing the pandemic will depend on an array of measures, including continued public health measures and vaccines for all, as soon as possible.

However, he admitted Canada will be getting fewer doses than expected from its next shipment of the Moderna vaccine.

Canada anticipates 180,000 doses next week, which is 78 per cent of what was expected. But he said the country is on track to receive two million doses of the Moderna vaccine before the end of March.

He called it "a temporary delay" that won't derail Canada's longer term goal to offer vaccines to all who want one by fall.

"In the short term, those numbers can fluctuate but as global production continues to pick up there will be more stability in the system," he said.

The blow comes as Canada's allotment of the COVID-19 vaccine made by Pfizer-BioNTech is also delayed, however Trudeau said he spoke with Pfizer CEO Albert Bourla, who insisted Canada will still receive its promised four million doses by the end of March.

Conservative Leader Erin O'Toole faulted the Liberals for failing to bring vaccines, rapid testing and therapeutics into widespread use.

“We’re here today because they’ve failed to secure and use these tools," said O'Toole in a statement, adding that Canadian airline jobs are in jeopardy.

“By now, Canadians should know when things are going to get better."

On Friday, Quebec reported 1,295 new COVID-19 cases and 50 more deaths, including nine in the previous 24 hours. Hospitalizations dropped by 47 to 1,217, while those in intensive care dropped by three, to 209.

Ontario reported 1,837 new cases and 58 deaths, with 51 confirmed cases of the variant first detected in the United Kingdom.

Manitoba reported 152 COVID-19 cases and three deaths, most from the northern health region, which has seen outbreaks in some remote communities.

Trudeau also said Friday that provinces and territories will get $1 billion to help further shield schools from infections, including sanitizer and better classroom ventilation, as well as support for remote learning. This is the second instalment of federal funding through the Safe Return to Class Fund.

Last August, Trudeau committed up to $2 billion through the Safe Return To Class fund. The first instalment was paid out last fall.

The new travel rules introduce measures that are already in place in some countries.

Earlier this week, the U.K. announced that residents returning from 30 "red list" countries will go through a mandatory 10-day quarantine at their own expense.

Travellers returning to Australia are charged $3,000 for a two-week hotel quarantine.

Trudeau acknowledged the many sacrifices Canadians have already made to contain infections but said difficult measures must be adopted to get through the pandemic quicker.

He insisted the government was committed to the safe restart of the tourism sector, when conditions improve.

"We're doing this to keep as many Canadians alive and healthy as we can," he said.

Quebec's deputy premier Geneviève Guilbault said Friday her province had repeatedly requested such measures and was pleased to finally see them in play: "We are very satisfied."

A senior Ontario government source said the province won't wait for Ottawa to implement the quarantine restrictions, and will move forward its own mandatory testing program at at Toronto's Pearson International Airport and land borders starting Monday.

Non-essential travel into Canada by most foreign nationals has been banned since the pandemic first began sweeping across the country last March.

Quebec Premier Francois Legault and Ontario Premier Doug Ford have urged Ottawa to ban flights from countries where the new, more contagious variants of the virus are circulating.

Canada did temporarily ban flights from the United Kingdom after that country reported in December a new variant of COVID-19 that was spreading like wildfire. But the ban was lifted once the pre-departure test requirement came into effect.

Federal officials said the focus was on suspending flights to destinations popular with vacationers.

They made it clear spring break holidays are off the table, and directed strong words at anyone who embarks on a recreational jaunt.

"If they're going to make that choice then they should bear the full cost and responsibility of all the measures that are necessary to keep Canadians safe," Public Safety Minister Bill Blair said, adding it's not just simply the cost of a hotel room.

"There are health measures, security measures, testing measures and transport measures, all of which we don't believe that Canadian taxpayers should be on the hook for."

— By Cassandra Szklarski in Toronto, with files from Shawn Jeffords in Toronto and Chris Reynolds in Ottawa

Ontario COVID-19 cases dropping but province is not in the clear, adviser cautions