Jagmeet Singh on NDP's position on banning Proud Boys. Will it resonate? 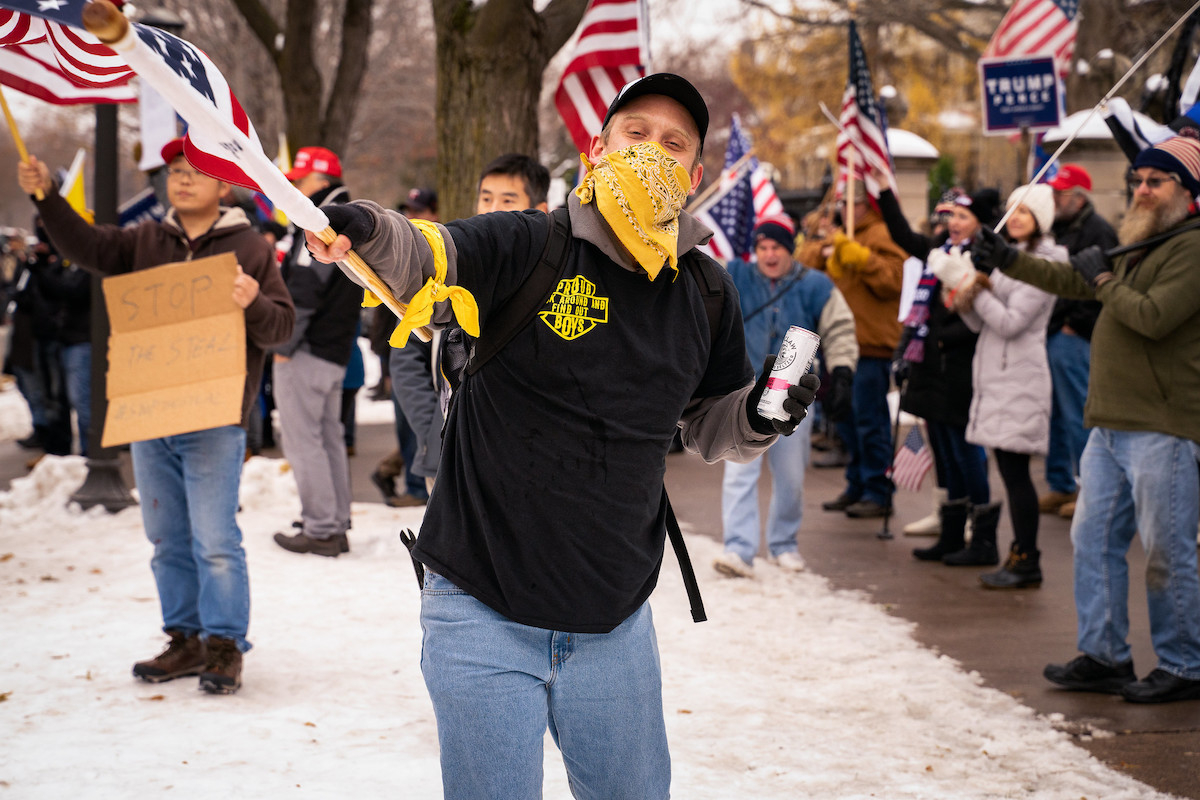 A member of the Proud Boys waves a flag at a "Stop the Steal" rally outside the Minnesota governor's mansion on Nov. 14, 2020. Photo by Chad Davis / Flickr (CC BY-SA 2.0)
Previous story
Next story

With the House of Commons back in session for the new year, NDP Leader Jagmeet Singh has a campaign to appeal for votes after pushing the government to list a homegrown white supremacist group as a terrorist organization following a motion he introduced on Jan. 25.

While the move has found political support among federal opposition parties, with MPs voting to urge the Liberal government to designate the Proud Boys as a terrorist entity, it will be interesting to see how the party's demand plays out among a constituency whose support could be key to NDP fortunes in a possible spring election: Young people on university and college campuses.

The Proud Boys, a far-right, neo-facist, male-only group, is making headlines for its racist rhetoric and violent demonstrations. Founded in 2016 by Canadian Gavin McInnes, the hate group began to gain traction following the 2016 U.S. presidential election.

The group has faced mounting pressures to disband since the Jan. 6 insurrection at the U.S. Capitol building. The Proud Boys Canada page, including other regional chapters such as Proud Boys Toronto, was on the social media app Parler, which went offline days after the Capitol attack.

Singh has been encouraging his followers to sign an online petition on his social media pages after posting videos to Instagram and TikTok urging viewers to sign their names to get Trudeau’s government to officially ban and designate the Proud Boys as a terrorist group in Canada. Although there is no live count of signatures, Singh later took to Twitter to say the “overwhelming response” led to the petition website crashing. His office says that as of Friday, Jan. 29, the petition had 102,000 signatures.

During his 2019 election campaign, Singh said he prioritized reaching out to younger voters in ways that are relevant to them, and on platforms they tend to favour. Using Instagram and TikTok is a strategic way for the NDP leader to engage directly with Canadian youth, especially on the very university and college campuses where his campaign took off during the 2019 federal election.

“Young people care, and they want to see change," the NDP leader said in an interview with the National Observer.

The federal NDP's calls for Proud Boys to be labelled terrorists may play well on university and college campuses — even if the demand is ultimately rejected, writes @CamillaBains. #racism #humanrights

"They (young people) really believe we need to build a world where everyone is celebrated. I'm hoping the idea of putting our resources, our security forces towards the real threat towards Canada will get young people talking about this and ask, 'How do we build a safer world?' It’s not enough to just be free from violence, we want to build a culture where we celebrate people for who they are."

If Singh’s prospective Proud Boys ban resonates with university students, it could prove to be a deciding factor for a key demographic in the lead-up to a possible spring election. University campuses across Canada are important points of contact for political leaders to reach out to students and secure crucial votes.

Olivia Karp, deputy of internal and external affairs for Ryerson University’s Politics and Governance Student Association, is also the founder of two organizations dedicated to involving youth in the political sphere: Doorsteps to Democracy and Ontario Provincial Youth Cabinet.

“Students are happy with the (push for a) ban,” says Karp. “They're discussing and going on different social media pages, saying, ‘Your voice can be heard on this petition.’”

Ethan Birch, a third-year student at Brock University in St. Catharines, Ontario, has been posting on social media about the rise of right-wing extremism in North America.

Birch says he previously identified as a Conservative until he learned more about the NDP’s values of inclusivity in his first year of university. He says he now focuses on educating peers through platforms like Instagram.

Birch says banning the Proud Boys is imperative in setting precedents on how Canada deals with hate.

“It’s unapologetic white supremacy,” says Birch. “It’s just very offensive, and they’re very violent. It seems very obvious that it's just white supremacy, and the Proud Boys are responding with anger that it’s being challenged … I completely agree with labelling them as a terrorist organization.”

Birch says the Proud Boys represent a larger issue. “These types of people have been around for a very long time, and they change names over and over and over again.”

Ethan Birch on the importance of banning the Proud Boys. (Jan. 18, Camilla Bains)

In a general prepared statement to the National Observer, a spokesperson for Public Safety Minister Bill Blair said: “Such listings send a strong message that Canada will not tolerate acts of violence.”

“When an entity is placed on the list, financial institutions freeze its assets and it becomes a crime to knowingly deal with the assets of a listed entity,” said Mary-Liz Power.

Blair’s latest mandate letter also includes a note on combatting systemic racism, though it’s unclear what steps he will take, if any, to deal with the Proud Boys.

Phil Gurski is also weighing in on the debate of placing the Proud Boys on the terrorist organization list.

“It's an administrative tool of marginal utility at the best of times,” says the retired Canadian Security Intelligence Service (CSIS) analyst, who specialized in Islamist terrorism and extremism. Gurski, now a consultant, wrote some of the first terrorist lists as far back as 2002, including adding al-Qaida in the aftermath of 9/11.

Although he agrees with designating Proud Boys as terrorists, Gurski says it may prove to be largely ineffective and highly politicized.

Gurski says adding the Proud Boys to a terrorist list could “send a good message,” but sees no evidence the action would make Canadians feel any safer. He also says the government must tread delicately to avoid charter right violations. Section 2 (b) guarantees Canadians freedom of expression and opinion.

Gurski says CSIS and the RCMP would likely monitor the Proud Boys regardless of whether the group is placed on a terrorist list.

Despite Gurski's doubts about the effectiveness of sanctions against Proud Boys, students such as Injy Fouda would still like to see tougher action and hope the NDP petition forces the issue.

Fouda, a 19-year-old Ontario student studying at McGill University, is a Muslim woman whose family emigrated from Dubai in 2014. Fouda has been following the Proud Boys in the news closely since the U.S. Capitol attack.

Fouda was shocked to discover the group was founded by a Canadian.

Fouda and Birch have both signed the petition to ban the Proud Boys.

Fouda says some political leaders haven't prioritized reaching youth as Singh has. Although Fouda was not of voting age in the last election, she says the NDP can count on her vote in the future.

“(Singh) going on TikTok and going on Instagram and social media, he clearly has a certain goal in mind,” says Fouda. “He's catering towards youth, and that's definitely something that's influencing the way people are evaluating their political stance.”

The NDP has for decades had a

The NDP has for decades had a higher voter preference among younger voters. This particular issue affects a much greater proportion of the electorate, as witnessed by the murders and assaults on older age groups in the last few years, and especially assaults during Covid. Given this, I hope a generally broader approach is being taken as well.

In his early days in office

In his early days in office Mr. Trudeau abolished the law on terrorism which Stephen Harper had developed during his time in office. He then said there were five groups in Canada that were under surveillance as possible terrorist groups. I wonder if these people are on a list somewhere or are these just identified as being under suspicion. If you are going to identify the proud boys as a terrorist group then you most likely will have to take some action against the group. It then follows that you should be taking action against the other five groups if they still exist. As a result of abolishing the law dealing with this subject we are now left with the cost of keeping a close eye on these groups. Without a law, it seems to me it would be difficult to take action against a certain group or groups. Maybe a new law should be developed that would allow the authorities to deal with this problem from a legal stand point.

The proud boys have now been

The proud boys have now been named a terrorists group by the Prime Minister. This means the government can now withstand another non-confidence vote as the NDP will keep them in power. The only question I have does this mean all terrorists are welcome in Canada and can expect to have their name put on a list. Maybe someone uses this list at Christmas time to send out Christmas cards as I do not see it serving any other purpose without a law to deal with the issue.