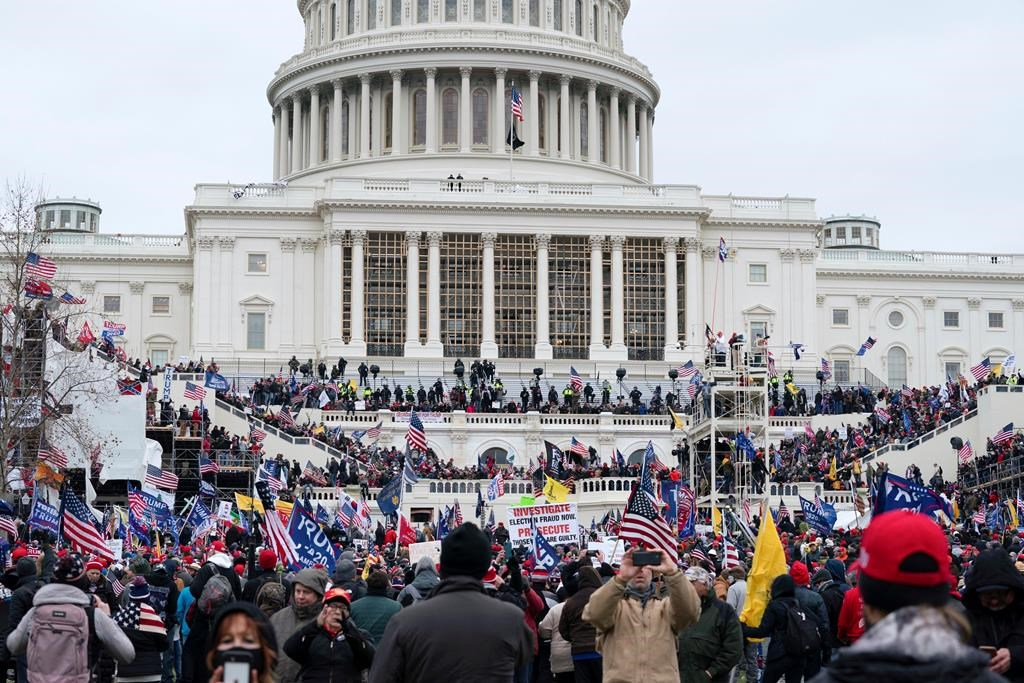 WASHINGTON, D.C. — What was supposed to be a historic day in the U.S. capital lived up to that billing for all the wrong reasons Wednesday as an angry throng of Donald Trump supporters managed to overpower police and lay siege to Capitol Hill.

After Trump aired familiar conspiracy theories and phoney grievances about a "stolen" presidential election, a group of protesters mobbed Capitol police and ran amok through the building as lawmakers were in the process of certifying Joe Biden's victory.

Members of Congress were promptly evacuated as officers, some with weapons drawn, confronted the mob. Protesters looted and vandalized offices, and even gained access to the very legislative chambers where members of the Senate and the House routinely sit.

The images that ensued were jaw-dropping: a man in a Make America Great Again hat, his feet up on Speaker Nancy Pelosi's desk. Another striding through the rotunda with a Confederate flag over his shoulder. The speaker's dais occupied by a man with a Trump flag as a cape. Protesters brandishing trophies swiped from offices.

Outside, as police sirens echoed and helicopters pulsed overhead, thousands upon thousands of others who were massed on the Capitol steps cheered and celebrated news of the breach, waving flags, firing flares and popping smoke grenades from atop the balcony.

Less than eight hours later, however, with the Capitol fully secured, lawmakers reconvened their joint session, determined to send the message that they wouldn't be cowed.

"To those who wreaked havoc in our Capitol today, you did not win," said Vice-President Mike Pence as he gavelled the session back in. "This is still the people's house."

Senate Majority Leader Mitch McConnell vowed never to be kept from the people's business by "thugs, mobs or threats."

"We are back at our posts," he said. "We will discharge our duty under the Constitution and for our nation. And we're going to do it tonight."

D.C. police Chief Robert Contee confirmed that shots were fired inside the Capitol and at least one person was taken to hospital with a gunshot wound. Media reports suggest that person later died of their injuries.

What was supposed to be a historic day in the U.S. capital lived up to that billing for all the wrong reasons Wednesday as an angry throng of Donald Trump supporters managed to overpower police and lay siege to Capitol Hill.

Trump, who earlier in the day vowed to loyalists gathered outside the White House that he would never concede defeat in November's presidential election, issued a tweet urging supporters to "stay peaceful."

He later posted a brief video urging occupiers to "go home," but also repeated his claim the election was stolen and expressed solidarity with the crowd: "We love you," the president said. "You're very special."

By the time Congress resumed, Twitter had seen enough, temporarily locking the president's account "due to a risk of violence."

Indeed, the day's events gave rise to fresh calls to impeach Trump immediately or to invoke the dusty 25th amendment of the U.S. constitution, which gives the vice-president together with the federal cabinet the power to remove a president from office.

Political observers, elected officials and leaders from around the world, including Prime Minister Justin Trudeau, roundly condemned the chaos on social media platforms. But outside the building, a jubilant, celebratory mood offered a jarring study in contrasts.

"This is not a violent insurrection," insisted Nancy Murphy, who travelled from Saratoga, N.Y., to attend Wednesday's protest and was front and centre when the clashes began.

"This is people who think they can pull a fast one and steal an election," she said, gesturing towards the Capitol dome, "and take our country away from us."

New Hampshire resident Tom Monahan struggled to rinse the sting of pepper spray from his eyes, his Trump-supporter mother doing her best to help, as he described the moment when the chaos erupted.

"I was just trying to get a better look, be a part of history," Monahan said, desperately squeezing blasts from a water bottle into his reddened, tear-stained face.

"My mother and I went up the stairs, and we ended up getting way too close, going way too far. Next thing I know, it's me and a whole bunch of police using spray and flash-bangs."

Both insisted that the crowds would remain defiant.

"This is the people's house in America," Murphy said. "They know what the constitution says; they're just choosing not to follow it. And no. America says, 'No.'"

As night fell, however — a persistent din of police sirens and the glow of emergency lights punctuating the darkness — police had surrounded the vast Capitol grounds in force and were gradually pushing people away from the building.

President-elect Joe Biden, whose election win two months ago was supposed to be certified Wednesday, instead found himself addressing the nation and pleading for calm.

"Our democracy is under unprecedented assault," Biden said, calling the protesters "extremists" who are "dedicated to lawlessness."

"This is not dissent, it's disorder, it's chaos. It borders on sedition, and it must end — now."

Even Kirsten Hillman, Canada's ambassador to the U.S., felt compelled to issue a statement, calling for cooler heads to prevail and noting that Canadian Embassy staff were all safely accounted for.

"Violence will never succeed in overruling the will of the people," the prime minister tweeted. "Democracy in the U.S. must be upheld — and it will be."

National Guard reinforcements were called in to help restore a sense of order, while D.C. Mayor Muriel Bowser imposed an overnight curfew beginning at 6 p.m. ET in an effort to disperse the crowds.

"I continue to urge all Washingtonians to stay home and stay calm," Bowser told a news conference. "The behaviour that we are witnessing is shameful, unpatriotic and above all, it is unlawful."

The protesters themselves provoked police officers on the Capitol grounds, Contee said.

"Due to the violent behaviour towards the police officers there, and their intent on gaining access to the Capitol, a riot was declared," he said.

"It was clear that the crowd was intent on causing harm to our officers by deploying chemical irritants and police to force entry into the United States Capitol building."

Contee said 13 people had been arrested, all of them from out of town, and a number of guns had been confiscated.

Wednesday began with the president himself addressing a crowd of thousands massed between the White House and the Washington Monument, a sea of Trump banners and American flags snapping in a bitter January wind.