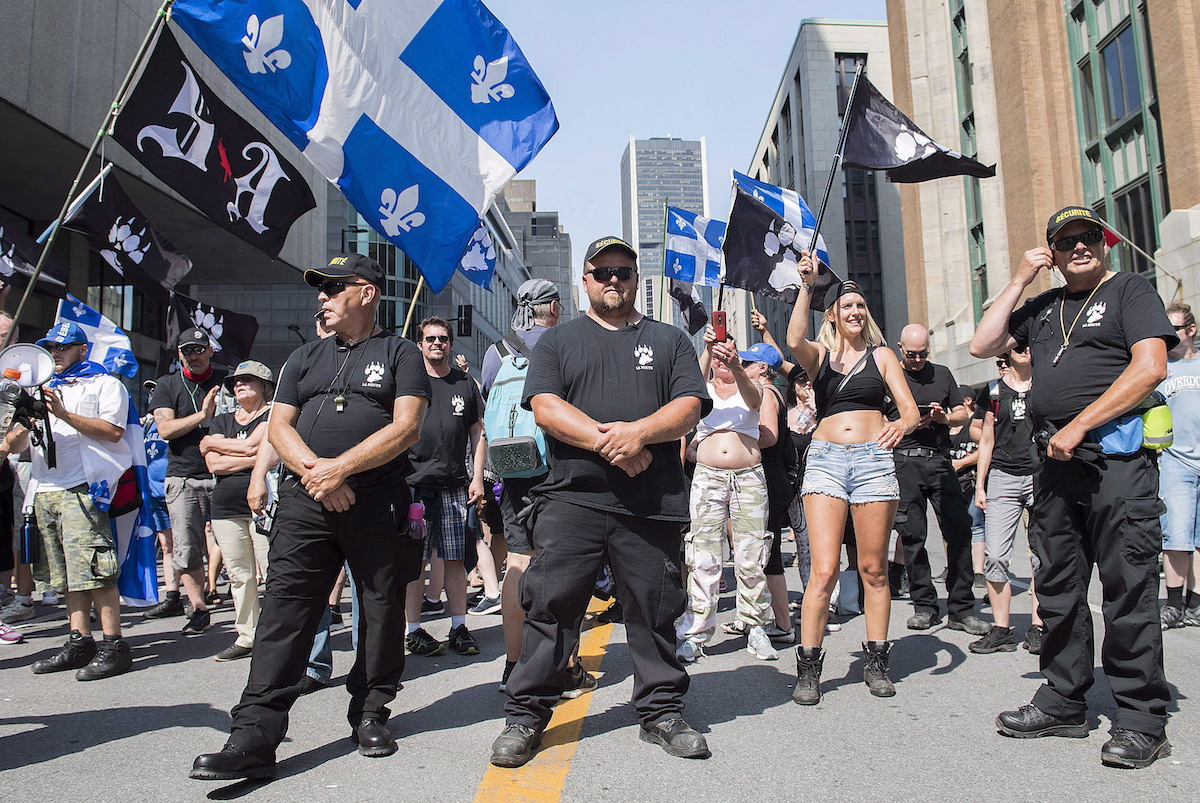 This is the first in a three-part series on the fourth anniversary of the Quebec City mosque attack. You can read Part 2 here and Part 3 here.

Last Wednesday, a page turned in American history, as Joe Biden was inaugurated as the president of the United States. His speech focused on the need for unity in the United States, as he promised to be the president for “all Americans.” Biden’s words took aim at the divisive rhetoric that had become normal under Donald Trump.

Within a week of his inauguration, Trump signed a flurry of executive orders that played to his racist base, including tightening border security with Mexico and his infamous Muslim travel ban, which prohibited most travellers from Syria, Iran, Iraq, Libya, Sudan, Yemen and Somalia from entering the United States.

A day later, on Saturday, Jan. 28, Justin Trudeau tweeted: “To those fleeing persecution, terror & war, Canadians will welcome you, regardless of your faith. Diversity is our strength #WelcomeToCanada.”

That weekend, Alexandre Bissonnette scrolled through the hashtag #muslimban. On Sunday, Jan. 29, at 5:28 pm, he looked at Trudeau’s viral tweet. Thirty minutes later, he was looking at the website of the Islamic Cultural Centre, a mosque in the same suburb near his home in Ste-Foy. He drove to his parents’ house, had supper with them and then told them he was going to a shooting range.

Just before 8:00 that night, Bissonnette, a man who had been eager to commit mass murder for all of his adult life, entered the mosque right after a prayer service and murdered Ibrahima Barry, Mamadou Tanou Barry, Khaled Belkacemi, Aboubaker Thabti, Abdelkrim Hassane and Azzedine Soufiane, and injured 19 others. He is currently serving a life sentence.

Bissonnette was not a member of any of Quebec City’s far-right organizations, many of which had grown in prominence, both through their activism and media attention, throughout 2015 and 2016. He was radicalized online, consuming mostly American far-right media. But there’s little doubt that the confluence of far-right organizing mixed with mainstream Islamophobia pushed him into action.

Bissonette was nine when the Columbine shooting happened. Eleven on Sept. 11, 2001. The so-called religious accommodations debate had been part of the news in Quebec since his early childhood. By the time he was 16, he was fantasizing about carrying out a mass murder, like the one at Columbine. Even though he wasn’t formally involved in a far-right organization, far-right activists and mainstream Islamophobia had been whipping up Islamophobic hatred, and Bissonnette was a tinderbox waiting for a spark.

In Quebec, the most extreme of these groups is Atalante — neo-Nazis who engage in street harassment that has sent at least one person who they targeted as an Antifa supporter to hospital. The Monday before the shooting at the Islamic Cultural Centre’s Great Mosque, Atalante had plastered three CEGEP campuses and Université Laval, where Bissonnette was a student, with recruitment posters.

The perpetrator of the 2017 Quebec City mosque attack — and his consumption of far-right media online — should remind us that social isolation and white supremacy are an explosive mix, writes @NoLore.

But more prominent and less extreme was La Meute. They were founded by former Canadian Forces soldiers, not far from Quebec City. Just over a month before the attack, CBC Montreal’s Jonathan Montpetit published a series of articles based on interviews with their leaders. The leadership was vehemently Islamophobic, and in fall 2016, their rallies swelled to 100 people and received widespread media coverage.

Rather than dampening the far right, Bissonnette’s attack emboldened them, aided by white supremacy in overdrive coming from the White House. La Meute, Atalante and other splinter organizations regularly marched across Quebec over the next two years (including one famous day where anti-racist activists managed to trap hundreds of La Meute activists for four hours in a parking garage on Aug. 20, 2017).

By 2019, La Meute had splintered so many times they were at risk of collapsing, and the far right took up causes other than racism and Islamophobia, like protesting child protective services. Vice’s Mack Lamoureux reported on the collapse, and concluded his article by saying it’s unlikely that La Meute will just go away. The ideas that propelled the organization’s existence wouldn’t disappear because of some infighting.

But the far right fell quiet throughout the fall of 2019. As the Coalition Avenir Quebec government’s anti-religious symbols legislation became law, Islamophobia was fuelled by right-wing columnists at mainstream newspapers who took regular aim at Muslim women, rather than racist activist groups.

In 2020, the pandemic created a new enemy, and many of the players who had built the organized far right resurfaced, taking aim at public health, fuelled by U.S. conspiracies.

Much of the rhetoric came from an online media channel called Radio-Québec, operated by Alexis Cossette-Trudel. As Montpetit reported in September, Cossette-Trudel translated QAnon conspiracy theories for Quebecers who were eager to lash out. His popularity skyrocketed. At least one former leader of La Meute emerged as one of the leaders at anti-mask rallies, some of which have drawn more than 1,000 participants.

In a province that boasts 50 per cent of all Canadian deaths from COVID-19, the popularity of the anti-mask movement is confounding.

COVID-19 is not race neutral, and it makes sense that many among Quebec’s far-right have glommed onto the anti-mask movement. COVID-19 has disproportionately sickened and killed racialized people. Because of COVID-19’s relationship to systemic racism, anti-mask activists who demand fewer public health restrictions are in effect calling for even more harm to be done to racialized people.

Which brings us back to Alexandre Bissonnette. Or, importantly, someone like Bissonnette: a powder keg whose confidence to commit violent action rises with the strength of far-right movements. The anti-mask protests expose there are many Quebecers who are pulled by dangerously anti-social behavior.

In the four years since Bissonnette’s crime, we might look at Biden’s inauguration and say: finally, things will start to get better. But Bissonnette should remind us that social isolation and white supremacy are an explosive mix.

Once the pandemic is over, the energies of the current anti-mask movements will have to go somewhere, and the racist and Islamophobic struggle that so many within Quebec society are hell-bent on fuelling will find new adherents. They will be organized around the notion the state cannot be trusted, everything is a lie and white people need to protect our own.

If we can learn anything from Bissonnette’s horrible crimes, it’s that we need to fight right-wing extremism, whether in fringe organizations or on mainstream media platforms, and not expect it to go away now that Donald Trump’s presidency is over.

Very good article. Actual events plus a warning for the future. Thank you.

I’ve recommended Eric Hoffer’s “The True Believer” —the philosophical longshoreman’s 1951 book about the rise of mass movements and demagoguery which is still a valuable read today—uncountable times in the last four years, right about the time Trump was US president.

AGreed about the Eric Hoffer

AGreed about the Eric Hoffer book. I think CBC Ideas did a program on his thinking within a series on the rise of fascism in North America. His standout observation was that movements don't need a god but they need a devil to build.
So the basket of people calling for "freedom" from responsibility to anyone but yourself ( anti-masker frightened people) and fear of the invading hoardes of "non-european" immigrants (almost all of whom are well off entrepreneurs who give jobs to home grown Canadians, but why deal with facts ) and some notion that more capitalist exploitation of people and the natural world will benefit us all not those "freedom stealing" socialists.
The right wing movements glom onto devils as rallying points much better than progressives, who tend to focus on policy and thinking rather than feeling. Tommy Douglas went for feeling, so did Stephen Lewis and they marshalled people. Modern socialists need to go for feelings as a rallying cry too. of course they also need a sympathetic major news outlet to not sneer and dismiss their feelings as "unrealistic, fantasies".... ON LINE news has been the workaround recently for these less corporate sanctioned views.
If Libs don't actually act on climate change in major ways, we are all doomed I fear. I waver between hopeful and furious at the inaction.
The rich do what they want and the poor suffer what they must. That suffering is going to get really ramped up in the next few years I fear.

I'm writing this a year later

I'm writing this a year later. Things are worse. I keep wondering whether personal one-on-one conversations with "these folks" would help them see that turning their time, money, energy, passion and focus to the climate emergency would make them heroes (sort of ... you know what I mean) giving the gift of a future to their children. Is there a chance we could win any hearts over ... or are they now so beholden or "loyal" to their "devil" (re other comments here) that they're locked in and can no longer critically think?