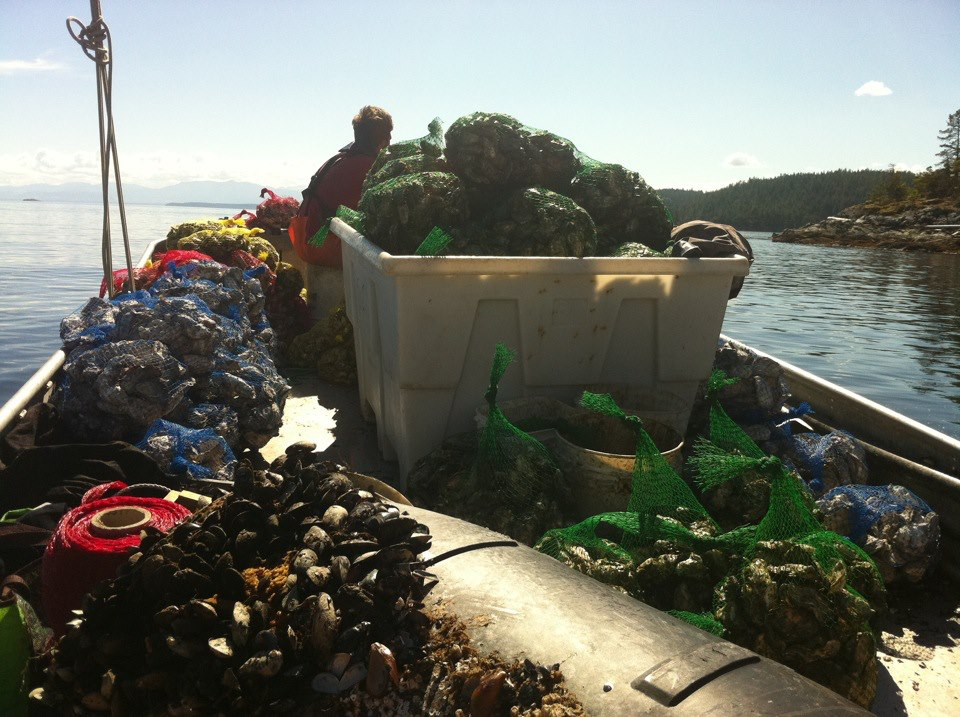 A Sawmill Bay fishing boat on the waters off Read Island in B.C. Photo courtesy of Sawmill Bay Shellfish
Previous story
Next story

Steve Pocock used to rely on rainproof notebooks to count his oysters off Read Island, but recently he upgraded his operations to include tagging machines and a software program.

Pocock received funding from B.C.’s traceability program, which provides software programs to help businesses trace and track products through all levels of production. Knowing exactly where shellfish comes from is key to limiting food-borne illnesses and it smooths out seafood industry operations.

Pocock says it was time for his operation at Sawmill Bay Shellfish to modernize after years of doing everything by hand. He used to print out the company's tags and attach them to bags of shellfish, but now has security-tagged rings and pre-made tags on a roll.

“So rather than writing things on a piece of paper or in a book, we can enter them into the software table we have on the farm. And then that information can be accessed from your home computer,” he said of the new tracking system, which also includes QR codes. “It's been a struggle this year, but certainly it just makes it look a lot more professional.”

Seafood traceability varies, but can include collecting and recording data during harvest, at the dock, during processing and where the product is sold.

Federal Agriculture and Agri-Food Minister Marie-Claude Bibeau said traceability is something the government values and the program will help ensure product quality.

“Our government will continue to support important initiatives, such as this, that help strengthen food safety and ensure consumer confidence in Canadian food products at home and abroad,” said Bibeau about the program, which has dispersed over $1 million to different agriculture businesses since it began in January 2019.

There have been problems with B.C.’s seafood supply. Between 2016 and 2020, up to 15 people have been paralyzed by contaminated seafood in the province. Tofino’s 2016 Clayoquot Oyster Festival saw more than 100 people get sick from raw oysters.

Traceability is not only key to tracking and preventing illness, but can also control illegal and unreported fishing. An Oceana Canada report from November on the traceability of Canada’s seafood said the country’s current practices are resulting in up to $93.8 million in lost tax revenue and up to $379 million for industry workers.

There have been calls for an overhaul of the way Canada traces its #seafood, including an Oceana Canada report saying current practices are resulting in up to $93.8 million in lost tax revenue. #traceability

“The government must deliver on its mandate to implement boat-to-plate seafood traceability and avoid Canada being left behind in global best practices. It is in the best interests of the fisheries sector and consumers. Canadians deserve to feel confident that their seafood is safe, honestly labelled and legally caught.”

The federal government made a commitment to moving forward with a "boat-to-plate" traceability program in 2019, noting “more than 40 per cent of the fish and seafood products sold in Canadian stores and restaurants are mislabelled.” A timeline has not been released on when the plan will be enacted.