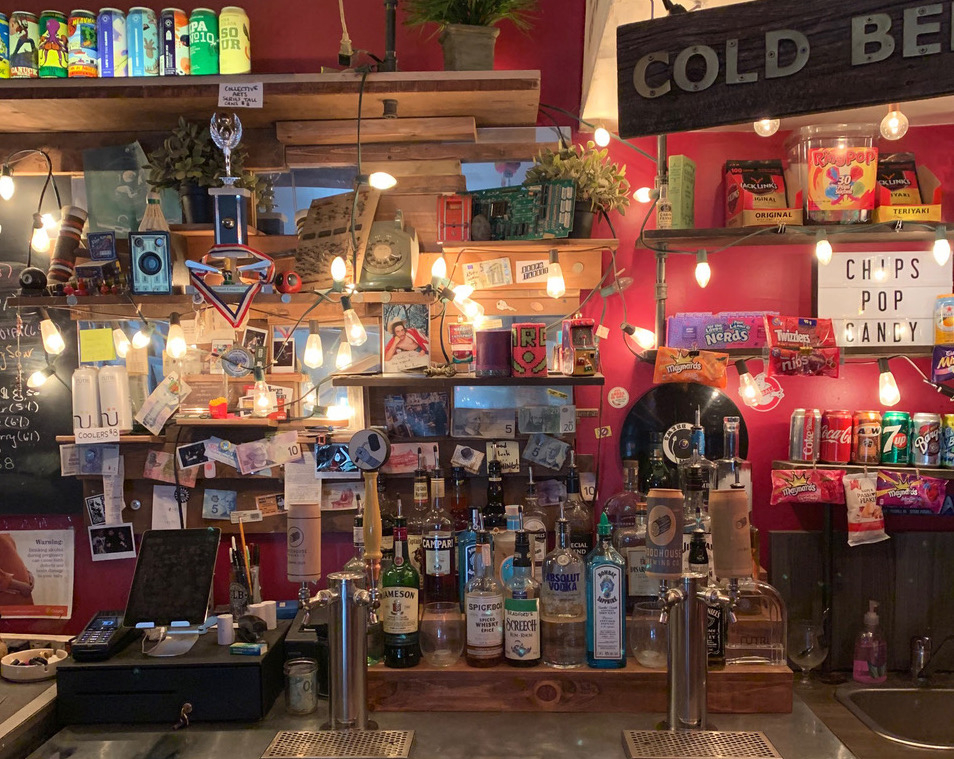 The bar at Parkdale pinball arcade Cabin Fever has sat empty for most of 2020. Photo supplied by Robyn Harrison
Previous story

Their regulars took on an October sleet storm to drink sidewalk beers and booked slots to play solo pinball among plastic dividers in the limited weeks of 2020 when the niche bars of Parkdale could offer some modified version of their typical social interaction.

But for much of the year, bar owners with loyal customers who felt more like family saw sales slow to a trickle.

They still had to pay liability insurance to maintain legal standing, though, and, in fact, discovered they’d be paying much more for the privilege of abiding by provincial law while dealing with less of the usual risks.

“When you have a liquor licence, you have to have liability insurance for your licensed establishment, which is very expensive, but understandably so. Because I have 30 people drinking in my space and a set of stairs to go to the washroom, it makes sense,” said Robyn Harrison, owner-operator of the Cabin Fever pinball bar, who was paying $425 a month for coverage before the pandemic.

She asked her broker to apply her payments for the three months she was required to close to the end of her policy’s term in July.

“I was told that they would not be offering a bar of my size insurance after my current policy ended,” she said.

She ended up going to another insurer, taking a 75 per cent cut to her contents insurance coverage to keep her costs about the same.

“Nobody was given any leeway or breaks on it with the pandemic, meaning that for nine weeks, I've had a third of the people in, and for the rest of the year, I've had nobody in but have paid the same liability premium as if I was open,” she said.

It is a complaint that echoes among the assorted evening haunts in the neighbourhoods of a city where for most of 2020, licensed establishments were restricted to selling takeout cocktails and cans of beer for much more than the LCBO rate.

“It's a very high cost that everybody is currently paying,” said Ali Barrie, the 38-year-old sole proprietor of the nearby Grand Trunk dive bar. “Unless you change your credit card or just don’t pay it. But then you're not in good standing for insurance the next time we open and it’s a legal requirement.”

“Nobody was given any ... breaks on it with the pandemic, meaning that for nine weeks, I've had a third of the people in, and for the rest of the year, I've had nobody in but have paid the same," says Robyn Harrison of Cabin Fever pinball bar. #COVID

Barrie has had to quickly pull herself together to serve the odd takeout customer who happens by, when her bar used to be a second living room for many of her regulars.

“We are the social misfits, we’re kinda a bunch of weirdos who just magically found each other and like to drink shots of tequila and have conversations,” Barrie said. “It's definitely emotionally draining and exhausting for me just sitting alone in my bar, crying at my bar waiting for someone to come and buy a takeout beer.”

“It's so incredibly depressing. We had a record-setting January (2020) and a record-setting February, and then March was half a month and then in April, I sold $25 with a gift certificate,” said Barrie, who opened the bar with her ex-husband and a good friend five years ago and has been its sole proprietor since 2017.

“Seeing my business finally becoming successful just shy of five years and then having that all ripped away is so incredibly heartbreaking,” Barrie said, noting the business was bringing in around $15,000 a month and approaching profitability before the pandemic.

Toronto establishments were only allowed to start providing outdoor dining in late June, then restricted indoor service at the end of July. By mid-October, indoor was off again and patios closed at the end of October.

Sean McLellan owns the larger Parkdale Mezz pub, and has been providing the bread that Barrie has been using to make outlandish pub grub-filled breakfast sandwiches.

That was “regardless of the fact that we were in lockdown and would conceivably be closed for at least the first quarter of the year,” he said.

Cabin Fever’s Harrison says she has heard the same story from a handful of bar owners in the area, as well as a friend who owns two spots in the nearby Junction neighbourhood.

Harrison used to host the City Pinball League, a 45-member league of pinball enthusiasts in its 13th season of fortnightly meets, when the pandemic hit.

The pinball enthusiasts and other regulars have since stepped up to help Harrison out, with one putting together a GoFundMe campaign early on that raised $16,000, which she credits with saving her in the first lockdown.

An external spokeperson for Burns & Wilcox, the wholesale insurance broker Harrison deals with, said the price fluctuations and withdrawn options were due to the vagaries of the market, where insurers have lost their underwriting appetite.

Burns & Wilcox acts as an intermediary between the insurance carrier and retail broker for their customers, helping secure underwriting for more traditionally difficult or hard-to-place policies, including for cybersecurity or large-scale construction.

“The industry is currently experiencing what we call a 'hard market,' meaning there is limited underwriting capacity available,” said Stephanie Boyd, a FleishmanHillard staffer representing the company. “Factors like rate increases, coverage options, among other terms, are determined by insurance carriers based on their underwriting appetite.”

Maybe there should be a

Maybe there should be a public insurance option.

Not being one who normally

Not being one who normally gives kudos to the insurance industry - I was surprised last year when my supplementary health insurer gave me a partial rebate and cut my monthly payment during the first couple of months of the first pandemic surge. That didn't last long; rates went back to normal after the two monthly breaks.
Reading this article I realize that insurers of businesses are turning on a roasting spit and the entire global insurance sector must be battered and bruised by the rising costs of climate disasters - among other existential risks. Who would choose to be an actuarial analyst these days?

Insurance titans are besieged by activists demanding they cease insuring or investing in corporations that are stripping the world of its forests, mining/drilling/exploring for more exploitation of fossil fuels, or plotting to destroy mountains and watersheds in the search for minerals. The same pressures are being applied to banks and pension funds - all the big institutional investors are now being required to demonstrate something like morality and Eco-consciousness in their investment decisions. What a horror? How do you adjust investment algorithms and calculations for these pesky intangibles? And now hoi polloi are attacking the hedge funds???

The Capitalist world turned upside down?

We can but hope.

Might this be the final revenge of the commons?

Finally - as for the idea that some kind of public insurance should come to the rescue? - well, insurance originated as mutual self help funds by people and businesses banding together to share risks. Many of the original insurers included "mutual" into their names. Most of that business model has disappeared - bought out by the for profit corporations. The resurrection of co-op like benefit associations for the small business sector appears to be a viable alternative worth considering.