Brewpub owner hunkers down, hangs on and looks ahead 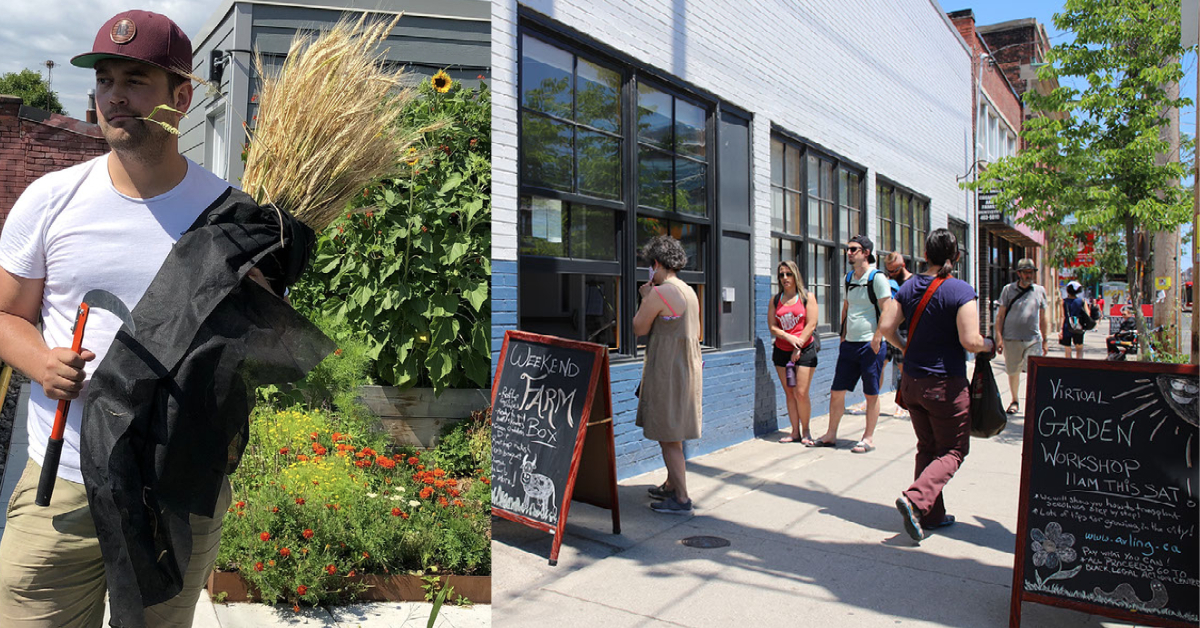 Max Meighen harvests the rooftop farm at Avling Kitchen and Brewery, where an existing retail operation and sustainable methods are helping him navigate COVID-19. Photo supplied by Max Meighen
Previous story
Next story

Max Meighen admits to being one of the more fortunate small business owners around.

The Avling Kitchen and Brewery he opened in Toronto's Leslieville neighbourhood back in July 2019 has spent more of its young life in COVID-19 lockdown than out of it, but is still making decent income from takeout beer sales and some limited food options.

The “whole animal” kitchen already had a butcher on-site to prepare its typical weekly order of a side of beef and a pig, who was quickly put to work selling cuts of meat and sausages out of the same retail store its customers already frequented to buy bottles and cans of Avling's beer before the lockdowns came.

A bookkeeper has made it easier to navigate various government relief packages, including the federal wage subsidy that meant they could hire for two specific roles in September, one for a retail manager and another in communications, to respond to the changed circumstances.

Apart from a brief opening in the summer, the pub has effectively been closed since March, but with nine months of interruptions, it still made around 60 per cent of the sales he’d expected in 2020, Meighen said.

That's not to say the pandemic and the response to it has not brought pain and frustration to the young business owner. The restaurant has had to lay off around 35 mostly full-time kitchen and service staff, while two kitchen workers from the original team provide takeout service and donations to two local community groups.

But Meighen has the latitude to hunker down and plan for better days ahead.

“We want to represent a post-pandemic possibility,” he told Canada's National Observer. “Not playing catch-up, but trying our best to be leading the way.”

After using marigolds planted in the rooftop garden to control pests, make oil infusions for the kitchen and adding them to an upcoming all-Ontario grain beer, Meighen is hoping to find funding for a project to add wastewater treatment or aquaculture to build out an even more circular urban agricultural ecosystem.

“We want to represent a post-pandemic possibility. Not playing catch-up, but trying our best to be leading the way,” says Max Meighen of Avling Kitchen and Brewery.

He has also worked out a deal with his pig farmer to use barley and wheat planted in his fallow fields for another experimental brew, and wonders about whether his own spent grain could go back to the farm.

“For my own sanity, maintaining my own optimism, looking forward to these projects and continuing to develop them is important,” Meighen said. “I’m trying to focus more on the possibilities of the future rather than the grim reality of the present.”

Meighen says that while nothing could have prepared a restaurant owner for the last year, he has learned that governments can, when they want to, provide much more support for individuals and businesses, and he's hoping the country's political leaders are also looking ahead.

“The real question for me is to what degree they take advantage of the months and year following the pandemic to initiate a rebound or a rebuild in a way that I hope looks towards greater equity, a more complete integration of green policy,” he said of the federal Liberal government that has bankrolled most emergency pandemic relief efforts.

That could mean heavy funding and policy efforts to help Alberta’s oil and gas workers thrive in a less carbon-intensive world, for example, as the pandemic accelerates problematic trends “people could ignore at their own peril up until February of 2020, but now are completely here to stay,” Meighen said.

Back to business as usual for banks

Unlike many small businesses along the strip of Queen Street East from the railway bridge and Jimmy Simpson Park to Greenwood Avenue, Avling pays a mortgage rather than rent. Meighen said the bank had expected business-as-usual terms after an initial six-month deferral of payment (but not interest).

“They were not as understanding as I would have liked nor expected,” he said, noting major lenders talk about being there to support small business.

Meighen says Avling's beer sales bumped higher in the early days of the pandemic as customers prepared for some extended time at home, “but as things dragged on and it became apparent that it wasn't just an enforced vacation, a short temporary hiatus, but something much more long term, all of our sales pulled back.”

The brief respite of the summer's looser rules and the city's CafeTO program, which made more sidewalk space available for dining, did help get weekly sales to around 85 per cent of typical, with Avling's 40-seat pavement patio replacing an inside space that used to regularly serve 100 people.

About a third of Leslieville storefronts are either restaurants, cafés or bars, and the head of the area's BIA (business improvement area) Dominic Cobran credits CafeTO with keeping many of those hospitality businesses afloat through the summer.

“It really was a lifeline for the participating restaurants,” he said of the program, which made extra pavement space available for al fresco dining and “helped them out to the point where it could take them through when they closed indoor dining” in October.