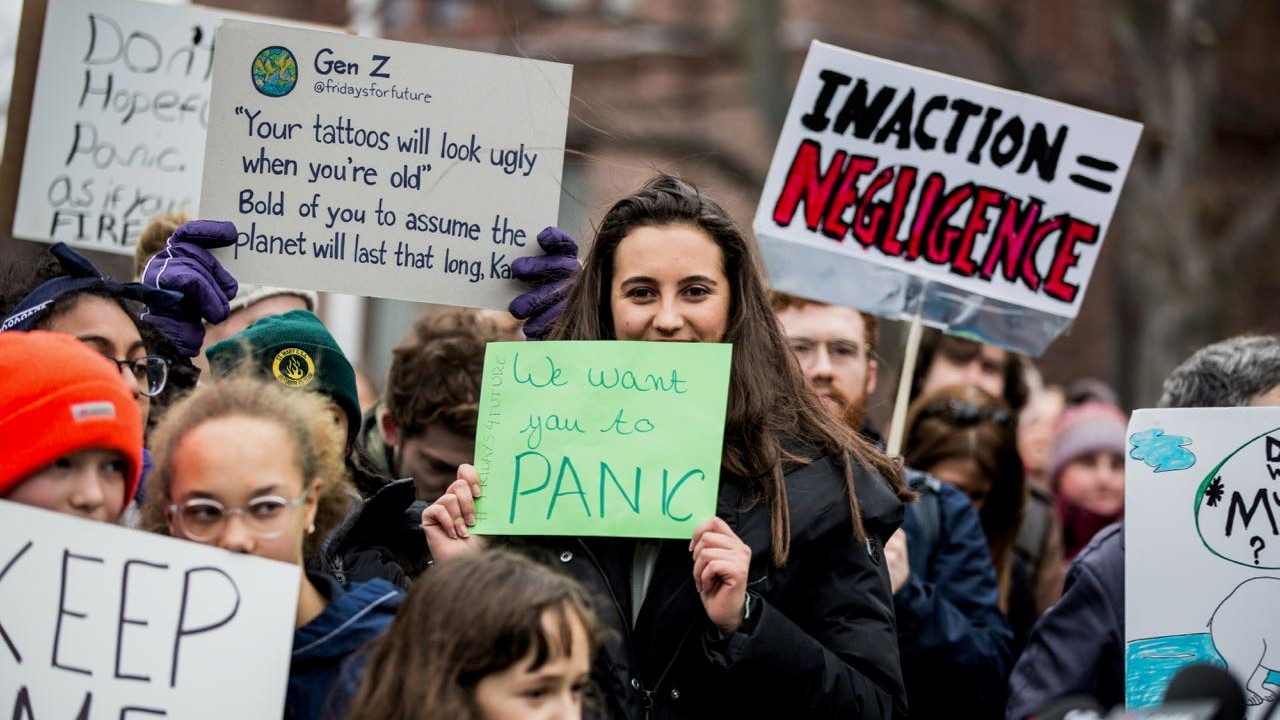 Aliénor Rougeot at the Fridays for Future strike in Toronto in 2019 that drew 50,000 young people and supporters into the streets. Photo submitted by Aliénor Rougeot
Previous story
Next story

As part of a series highlighting the work of young people in addressing the climate crisis, writer Patricia Lane interviews Aliénor Rougeot, who led the 2019 Fridays for Future school strike for climate in Toronto.

Now 21, Aliénor Rougeot led Toronto's 2019 Fridays for Future strike that drew 50,000 young people and their supporters to the streets. She has participated in the Climate First Tour with David Suzuki and Stephen Lewis (2019), run the UN World Environment Day virtual event hosted by ClimateFast (2020), and hosted the launch of the Africa Climate Action Initiative. She has been named one of Starfish Canada’s 25 top environmental leaders under 25. During the pandemic, she has been instrumental in supporting 40 young people to develop as climate justice leaders.

What did organizing the 2019 School Strike for Climate entail?

This young #Toronto activist followed in the footsteps of Greta Thunberg and led 50,000 students in the 2019 #fridaysforfuture climate strike. Her work continues online. #climatechange #climatecrisis

It was a joint effort with labour, other youth climate justice organizations, non-profits and community members. We had long logistical meetings to make sure people were safe, think about what we were demanding, and get publicity. We prepared tool kits to empower high schoolers to bring their class, and teachers to bring younger schoolchildren. We learned as we went. The only secret ingredient was flexibility.

We haven't heard much from Fridays for Future during the pandemic.

The aftermath turned out to be more important than the school strikes themselves to achieve our goal to get youth heard on the urgency of climate change. While the strikes were huge, the organizing committee, Fridays for Future Toronto, was quite small. We had focused on being in the streets and in the public eye, but with the pandemic, we shifted our organizing and events online. Many more young people, including some of our key leaders, wanted to join, so we had to do things differently. Our internal meetings became widely attended, and it took us a few more months to find a structure that worked.

Along the way, we educated ourselves about inequality, labour, racial and Indigenous justice issues.

What do participants get for being involved?

Young people joining our team quickly take on responsibility and learn project management, mobilization and relational skills, and, most importantly, what they stand for. Our teams produce quality in-depth content for both traditional and social media. We are now setting up chapters in every high school and university in the GTA (Greater Toronto Area).

Has it all gone according to plan?

Our external work was participating in the calls for a just recovery. While we made some progress, because I tend to see everything short of perfection as failure, I felt very disappointed., But others remind me that we achieved some of what we wanted, and we increased public support. We are in a hurry, but at the same time, we know lasting change requires ongoing work. Our 40 leaders understand their talents and values and will bring that confidence wherever they go.

My parents encouraged me to read widely and explore a multiplicity of issues. They supported me when I showed an interest in something. When I was 10, I got interested in biodiversity and explained the role of coral reefs in ecosystems to my classmates. We came to Canada when I was 18. Greta Thunberg’s novel and very direct approach appealed to me. I joined a Facebook group of moms helping kids organize. Although our first School Strike for Climate was small, these moms encouraged me and said they would be there for me until I did not need them anymore. Now just about the only thing that adults do for us is attend our events and drive the rented minivans. But I am grateful for their support every day.

You can feel like such a tiny drop in a sea of concern. But we need everyone. Find networks that share your worries and your enthusiasm. You will be both overwhelmed and hopeful, but if there is a group of you, these will happen at different times.

Keep the ties you have with older people and find one of them to support you. Don't be afraid to have “the talk” with your parents or your grandparents or teacher. After I told my grandfather how worried I was about biodiversity, even though he did not initially share my concern, he started reading about it. Now he sends me articles and we have good conversations. We care about each other, so we have learned about how to cross that divide. It really comforts me to know he is with me, and I am not alone.

Adults have helped me most when they have said, “We trust you; if you need us, we are here.” Offering your skills and networks is so important. Be a foundation for our contributions knowing that we will benefit, but also that we will do things in new ways.

And get arrested! This is, of course, not for everyone, but if you are an elder, it can really help.

the kids and first nations

the kids and first nations are going to save us from ourselves. Us well off retired folks can support them with monthly donations for the court battles (Eco Justice, Raven Trust) and get arrested if possible when required. We cannot afford to not do it.