Provinces must prepare to lock down again quickly in case variants take off: Tam 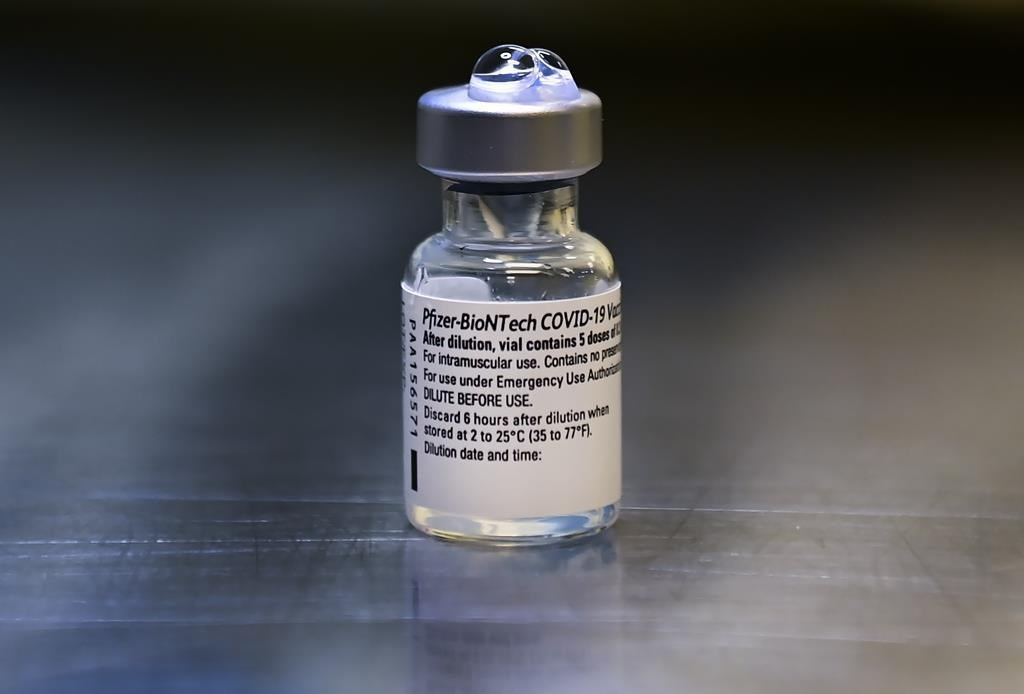 A vial of the Pfizer-BioNTech COVID-19 vaccine is shown at a UHN COVID-19 vaccine clinic in Toronto on Thursday, January 7, 2021. File photo by The Canadian Press/Nathan Denette
Previous story
Next story

With new and more contagious variants of COVID-19 escalating in Canada, provincial governments lifting lockdown restrictions must be ready to slam them back into place at a moment's notice, Canada's chief public health doctor said Tuesday.

At the same time, Prime Minister Justin Trudeau took another step toward trying to keep more variants from getting into the country, with a plan to start making people arriving in Canada by land show recent negative COVID-19 tests.

Chief public health officer Dr. Theresa Tam said Canada's COVID-19 picture is getting better, with daily case counts less than half of what they were a month ago and hospitalizations dropping.

About 100 people are still dying of COVID-19 every day but that's down from almost 150 people a day in the last week of January.

But over the last week daily case counts have come down in most provinces.

In British Columbia, health officials said progress is being made in pushing back the spread of the virus as it announced 435 new cases.

Ontario reported just over 1,000 cases Tuesday, its lowest total since the first week of November and less than one-third of the case totals a month ago. Quebec reported fewer than 900 cases, back to levels not seen regularly since October.

Both those provinces, and Manitoba, are relaxing some restrictions starting this week, with Quebec opening most shopping malls and hair salons, Ontario lifting its stay-at-home order for most of the province by next week and Manitoba starting to allow in-person dining for the first time since November.

Threat from variants means provinces must be ready to lock down again quickly: Tam #COVID19 #cdnpoli

All of it gives Tam pause.

"I think what my concern is that right now if we release some of these measures that a resurgence will occur," said Tam. "But that resurgence could be due to one of these variants, and then it will be much more difficult to control."

She said because we're not yet screening every positive COVID-19 case for the variants, Canada probably doesn't have a full picture of the Canadian presence of more contagious variants of the virus behind COVID-19. But because they could become the most prevalent sources of infection in Canada, any sign that they're beginning to spread needs to be met with a rapid and decisive public health response.

"You've got to put the brakes on quickly," she said.

The number of cases linked to any of the variants doubled in the last week, said Tam, and many are now not linked to any travel cases.

Trudeau said Tuesday that as of Feb. 15, non-essential workers arriving at land borders will have to show negative PCR COVID-19 tests completed less than three days before arriving.

Failing to do so can net a fine up to $3,000 and increased enforcement of the required two-week quarantine. Land travellers will not be sent to the mandatory quarantine hotels for those arriving by airplane.

The government began requiring all people arriving in Canada by air to show negative PCR-based COVID-19 tests in early January.

Trudeau said Canadians arriving by land can't be refused entry because they're already on Canadian soil when they meet with border guards. Air travellers getting on planes on foreign soil can be denied boarding without the tests.

The latest statistics from the Canada Border Services Agency show that since the end of March 2.9 million people, excluding truck drivers, entered through land border crossings, while 2.4 million arrived by airplane.

Sharma said the review team is confident that sixth dose can be extracted consistently, if the special low dead-volume syringes are used. Those syringes trap less vaccine between the plunger and needle after an injection.

Dr. Marc Berthiaume, the director of the bureau of medical sciences at Health Canada, said if people administering the vaccine are careful and use the special syringes "it's going to be very easy to draw the six doses from the vial."

Canada has ordered 64 million of the syringes and is starting to ship the first two million to provinces this week.

The change however means Pfizer will fulfil its contract to ship four million doses to Canada by March by sending fewer vials. Next week Pfizer's shipment of 67,275 vials will be said to contain 400,000 doses, instead of 336,000.

"The federal government has contracted out on the basis of doses, not vials, so it means the provinces are going to end up not getting as many doses, I think," Shandro said.

He said even with the right syringe, they're only going to get the sixth dose out of each vial 75 per cent of the time.

Dr. Mustafa Hirji, the acting chief medical officer in Ontario's Niagara health region, said on Twitter medical professionals there were 100 per cent successful at getting a sixth dose, and half the time were even able to get a seventh dose.

Pfizer's vials have 2.25 ml of liquid, including 0.45 ml of active vaccine and 1.8 ml of sodium chloride. Each dose is 0.3 ml, and when the amount trapped in syringes after an injection is accounted for, there is about 0.25 ml still left.

As part of the agreement to change the label Pfizer has to report to Health Canada every three months if there are any issues getting that sixth dose, and provide ongoing educational support. Health Canada is also providing training for medical professionals.

Canada's contract with Pfizer and BioNTech is to buy 40 million doses this year, with four million to be shipped by the end of March, and most of the rest before the end of September.

The United States, Europe and the World Health Organization all made the dose change last month.