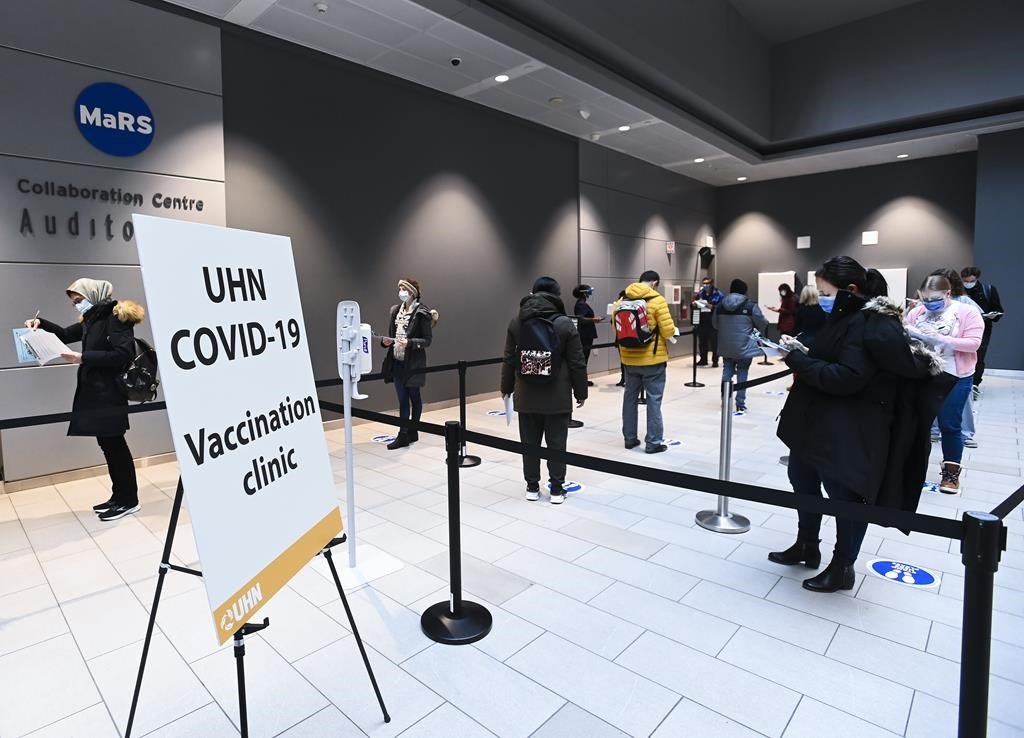 New federal forecasts project that COVID-19 variants could fuel a potential third wave that would eclipse its predecessors if Canada doesn't double down on the strict protocols that have reduced infections.

The Public Health Agency of Canada released modelling Friday suggesting that while infections continue to decline nationally, the spread of virus mutations threatens to reverse that progress.

Canada's chief public health officer says there are currently fewer than 33,000 active cases in Canada, a 60 per cent drop compared to a month ago.

But with more contagious variants now detected in all provinces, Dr. Theresa Tam says Canada may not be able to avoid a rapid acceleration of daily cases, predicted to hit 20,000 by mid-March, without continued vigilance.

"We are at a critical point in the pandemic and our efforts have begun to tip the balance in our favour," Tam told reporters.

"Protecting our progress and limiting the impact of variants of concern will require stronger action."

Even with current restrictions, the country could see infections increase by more than 10,000 per day in April, according to the modelling.

At a news conference Friday, Prime Minister Justin Trudeau said he has spoken to provincial premiers about a cautious approach to lifting restrictions.

Trudeau also said Canada received a shipment of more than 400,000 doses of the Pfizer-BioNtech vaccine on Wednesday — the largest delivery to date.

He noted the vaccine delivery is set to rapidly increase, as the provinces and territories prepare to roll out almost a million and a half doses of COVID-19 vaccines over the next three weeks in the race against the variants.

Canada could see a stronger third wave of #COVID infections if it doesn't double down on strict protocols, the Public Health Agency of Canada said Friday.

While it's hard to make exact predictions, Tam said the concern is that Canada could be heading down a rapid growth trajectory that would outpace daily increases of roughly 8,000 new cases recorded in early January.

The current national average of 2,900 new cases per day is 60 per cent higher than the peak of the first wave, she added.

"We've been saying all along that if we ease measures too soon, the epidemic will resurge even stronger. But with highly contagious variants in our midst, the threat of uncontrolled epidemic growth is significantly elevated," said Tam.

"Measures must be stronger, stricter and sustained long enough to suppress rapid epidemic growth of variants of concern."

Of particular concern is the B117 variant, which was first detected in the U.K., and has since spread to more than 85 countries, becoming the dominant virus in several European nations, said Tam.

"This is one variant where we may expect it to become the new sort of circulating virus," she said.

The other variants — such as those first identified in South Africa, and Brazil — haven't spread as widely across the globe, said Tam.

But even as these strains spread across the country, Tam said Friday's forecasts indicate that Canada could control the outbreak with enhanced public health measures, such as restrictions, closures and community-based control protocols.

With several provinces lifting restrictions, Tam urged authorities to take a slow and steady approach toward reopening, or it won't be long before they'll have to reimpose strict measures.

"What you want to do is to keep avoiding this yo-yo-ing effect of up and down," she said. "You need to avoid complete lockdowns and curfews and all of those things by trying to maintain a strong level of public health measures.

"You can't just keep doing the same thing and expect a different result."