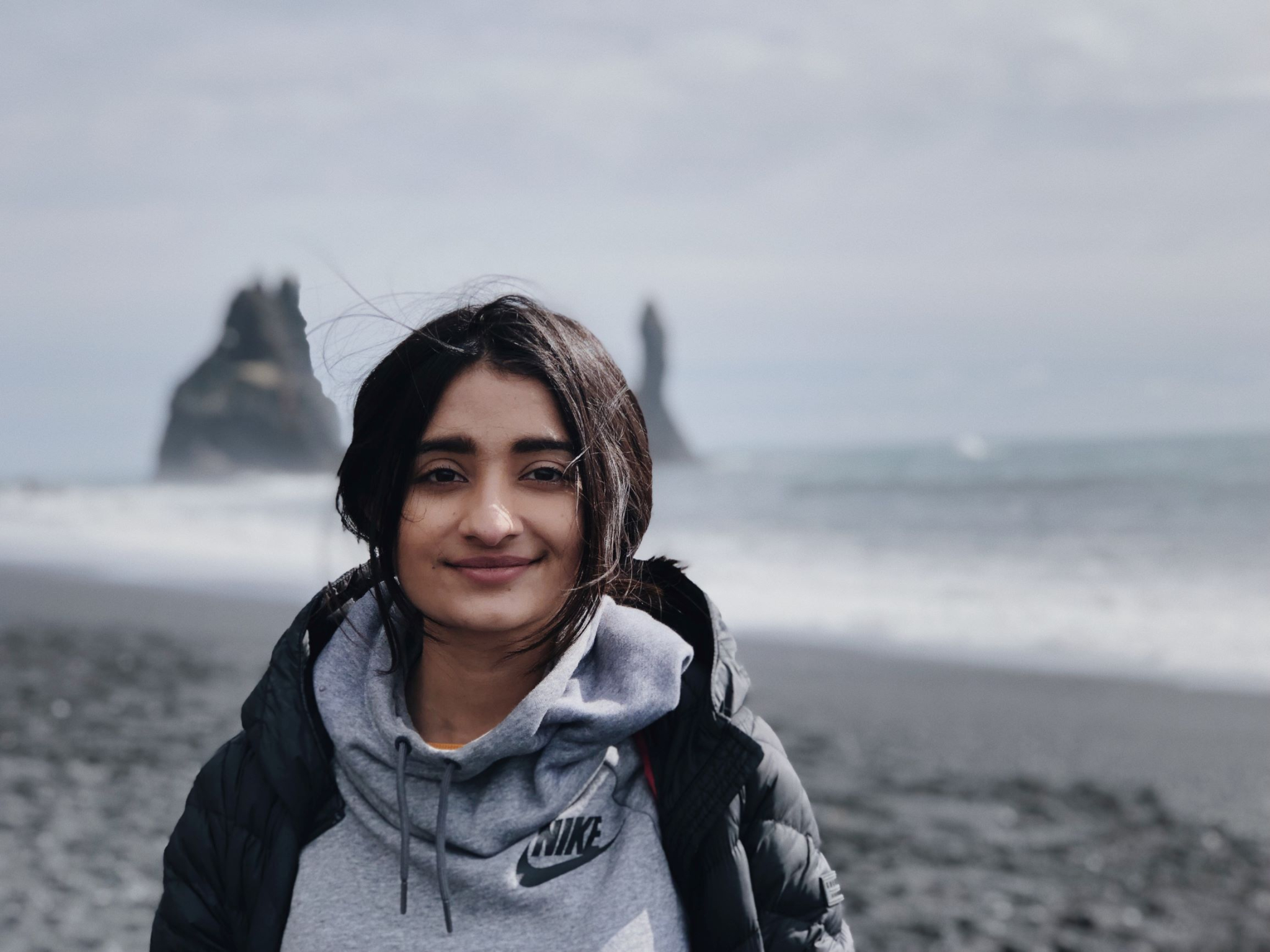 Manvi Bhalla, seen here in Iceland, is a health researcher who focuses on climate change. Photo by Komil Bhalla
Previous story
Next story

As part of a series highlighting the work of young people in addressing the climate crisis, writer Patricia Lane interviews Manvi Bhalla, co-founder of Shake Up The Establishment, which provides evidence-based, non-partisan voting guidance to youth in advance of federal elections.

Manvi Bhalla and Shake Up The Establishment

Manvi Bhalla helped change Canada’s climate conversation. In 2019, she and her friends formed Shake Up The Establishment (SUTE) to provide evidence-based, non-partisan voting guidance to youth in advance of the federal election. In June 2019, SUTE’s call for the federal government to declare a climate emergency went viral and 30,000 Facebook shares later, the federal government complied. Hundreds of other provincial and municipal governments in Canada have since followed suit. Bhalla, now 23, is a master of science candidate at the University of Waterloo, where she is studying appetites for climate action among public health decision-makers. She was named one of Starfish Canada’s Top 25 Environmentalists under 25 for 2020.

How did you come up with the idea for SUTE?

In April 2019, I asked my peers which political party had the best climate action plans. Most didn’t know, so we created SUTE to address that. The National Observer’s article about us shone a spotlight on our work, and with support from Patagonia, we put the climate crisis at the forefront of the 2019 election and increased youth voter turnout.

How did SUTE evolve after the federal election?

We seek climate justice, which is a human-centred approach towards addressing climate change and issues exacerbated by the climate crisis.

SUTE also takes action. Can you tell us about that?

We are a part of an ecosystem of motivated young people dedicated to an equitable, livable future. Over the past year and a half, we have amplified a number of critical campaigns, including calling for a national strategy to redress environmental racism under Dr. Ingrid Waldron’s leadership. We supported Fridays for Future Toronto to stop the municipality of Oka, Que., from conducting an archeological dig on land that members of the community suspect to be Mohawk burial ground.

How does your health research connect to climate justice?

When climate change is described as a public health issue, people are more likely to act. I am exploring the barriers preventing public health decision-makers from making progress for climate action. Our response to COVID-19 shows if our health and “business as usual” is threatened, no stone will be left unturned. This urgency is missing from our responses to climate change and I want to work to change that.

Where does your fiery spirit come from?

My mom and I immigrated to Canada when I was three, after my dad saved enough money to bring us over by working night shifts as a security guard (and) attending dental school at the University of Toronto. Despite being practising dentists in India, both my parents had to redo their degrees to be able to practise dentistry here. We lived in Thorncliffe Park, a densely populated, multicultural neighbourhood in Toronto full of recent immigrants like us. After a few years, my parents moved my family to a suburb in Hamilton. The move made me aware of social, cultural and economic privileges that exist in our society and how one’s environment shapes one’s life.

As our yard got bigger and my schools became more white, I experienced a great degree of identity erasure to fit in and experienced a deep pull towards assimilation as a form of survival. While this still haunts me, over the years, I’ve reconnected with my ancestry and am so proud of my South Asian heritage.

What does it teach you?

Although I am an atheist, my family practises Sikhism, which asks that we live an honest life, redistribute our resources, whether it be money or time, to provide for others through seva (selfless service), and we meditate to seek happiness. My mom once told me, “Work is worship.” I believe that working to support community care allows us to live in Chardi Kala, an eternal state of optimism and joy in the face of adversity. As I became aware of the systemic barriers facing historically minoritized populations, I developed a deep sense of duty towards helping the many underserved communities that look like mine in Canada. When one of us thrives, we all do.

Support decision-makers who are prioritizing the establishment of a just, equitable, sustainable future for all. Make room for historically underrepresented voices, work towards the collective recovery of the land and the health of the peoples who inhabit it, and seek collective liberation for us all from oppressive systems.

Do you have a message for older people?

Lead by example. Advocate for anti-racism and actively practise anti-oppression. We cannot fix a problem that has its roots in colonization without first decolonizing our practices in all spaces. Be aware of your own identity. Do not speak for others; instead, see who isn’t represented and advocate for the resources needed so they can be present to speak for themselves. Climate justice depends on evidence from both science and traditional knowledge systems. Most importantly, climate justice and human rights are not partisan issues.

This article has been updated to correct information regarding Manvi Bhalla's age as well as the captions for the first and second photographs.