Could seaweed be a salve to debate over salmon farming? 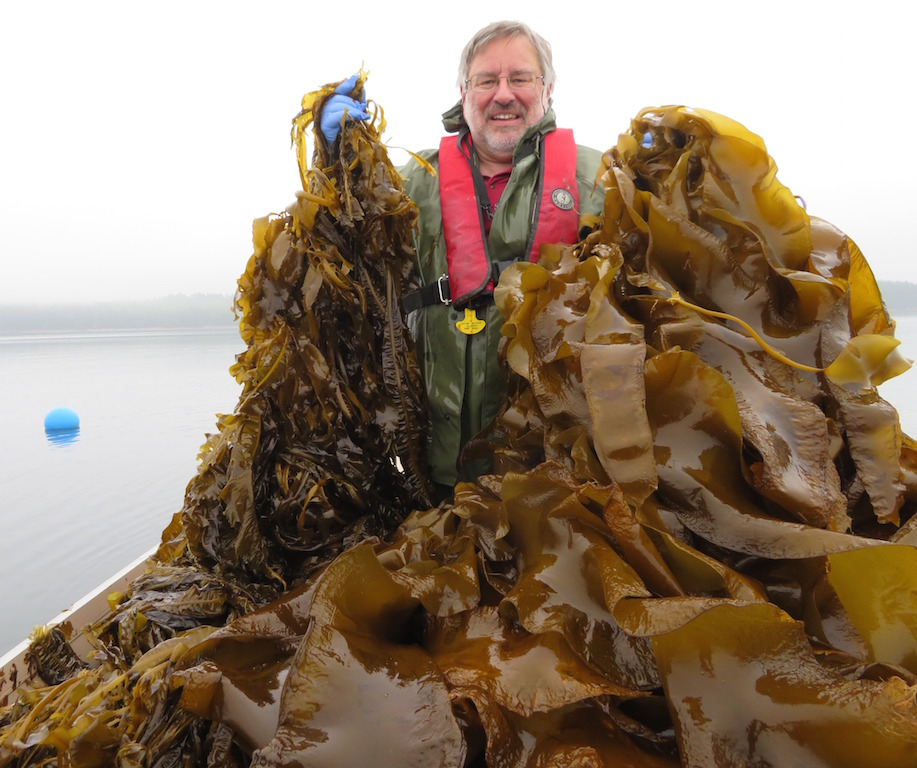 Seaweed is great at dealing with the waste from salmon farms and providing producers with another cash crop, says researcher Thierry Chopin. Photo by Steve Backman
Previous story
Next story

For well over a decade, scientists on Canada’s coasts have demonstrated how growing seaweed or shellfish alongside salmon farms can provide a host of benefits — economic and ecological.

Researcher Thierry Chopin has been pitching the idea of co-cultivating multiple species together, or Integrated Multi-Trophic Aquaculture (IMTA), since the late 1990s.

The notion behind co-cultivation, or IMTA, is that extractive species like seaweed, mussels, or sea cucumbers can filter or flourish from the uneaten feed, waste, and byproducts from fish farms.

Modelled around the natural food chain, IMTA takes a circular economy approach to aquaculture that both improves marine ecosystem health and increases the number of products that can be grown at one site, said Chopin, a marine biology professor at the University of New Brunswick.

For example seaweed, the focus of Chopin’s research, is a quick-growing, potentially lucrative crop that is very effective mitigating waste from salmon farms by pulling nitrogen, phosphorus, and carbon from the water, while being a net provider of oxygen, he said.

Not only salmon farms can benefit, said Chopin, who has done extensive work in Eastern Canada’s Bay of Fundy to take the co-cultivation of seaweed from the research stage into development and commercialization.

If shellfish are added to the mix, they could benefit from seaweed carbon capture, which, in a localized area, may reduce ocean acidification that threatens the growth of shells on baby mollusks.

It can also potentially improve the social acceptability of farmed salmon and even fetch a premium price, approximately 10 per cent more, for its sustainable attributes, much like the organic food market.

“Seaweeds are good in providing what we call ecosystem services, and it’s time we put value on the services that until now have been free of charge,” @UNB researcher Thierry Chopin says. #aquaculture #seaweed #Canada

Yet with all the demonstrated advantages, industry uptake and the large-scale commercialization of co-cultivation in aquaculture is likely to be a slow process, said Chopin.

“It’s a long battle, especially with the big salmon companies,” he said.

“I don't think people are disagreeing on the merits of IMTA, it’s been pretty much proven,” Chopin said.

“But after that, it’s about economics. Companies think, ‘I can make money with my salmon alone in the present system, why should I complicate things?’”

IMTA is being used commercially on a large scale in China. But in Canada, it’s mostly independent fish farmers who are experimenting with it, Chopin said.

“(It's) the small and medium company that wants to differentiate themselves from the big ones,” he said.

Government needs to better evaluate, recognize, and invest in the value of biomitigation in aquaculture for both society and the environment, he said.

There’s often no cleanup cost associated with salmon farm waste byproducts entering the ocean, so there’s little incentive for producers to grow extractive species to deal with the issue.

On the other hand, there are also no economic or regulatory advantages to learning to do aquaculture differently, Chopin said.

“Seaweeds are good in providing what we call ecosystem services, and it’s time we put value on the services that until now have been free of charge,” he said.

Seaweeds and invertebrates produced in a co-cultivation system should be candidates for nutrient (i.e., nitrogen capture) or carbon credits similar to the way forests are valued on land within the ecosystem goods and services framework.

And mutual investment by government and industry in the traceability and labelling of sustainable IMTA products would pay off in the long run, too, he said.

Most salmon consumers are cognizant of the environmental concerns around conventional salmon farming, and close to 64 per cent of them favour adopting more sustainable aquaculture methods even if they're more expensive, research suggests.

“If we want aquaculture practices to move to several species together, taking advantage of species interactions, we need incentives ... We also need changing regulations."

A $1.2-million study by NIC in co-operation with the BC Salmon Farmers Association examined the potential of growing kelp at more than 40 fish farms in the region.

However, aquaculture companies that participated in the study, which ended in 2018, haven’t made the jump to producing seaweed, said Allison Byrne, an applied aquaculture research associate at NIC.

But the initial kelp study snowballed into a lot of interest from First Nations and other companies wanting to test the viability of seaweed at various aquaculture sites with NIC's help, Byrne said.

That led to a number of First Nations partnering with Cascadia Seaweed, a new company looking to commercialize kelp production on B.C.'s coast on an industrial scale, she added.

There are any number of research possibilities associated with IMTA and the co-cultivation of seaweed, said Byrne, who has also examined growing seaweed with shellfish.

She agrees with Chopin that there isn’t much financial draw for big salmon companies to undertake kelp farms.

“The value of kelp is sort of a drop in the bucket compared to a salmon farm,” Byrne said.

But, there are potentially other ways for the extra space on an aquaculture site to be put to use more efficiently, she added.

“It could be a good way of maybe fostering collaboration between the salmon farms and their First Nation or community partners to sort of reap the benefits.”

Editor's note: This story was updated Monday to correct wording in a quote from professor Thierry Chopin, replacing the word agriculture with the correct word aquaculture.