‘We will not apologize’: Ford government defends use of controversial zoning orders 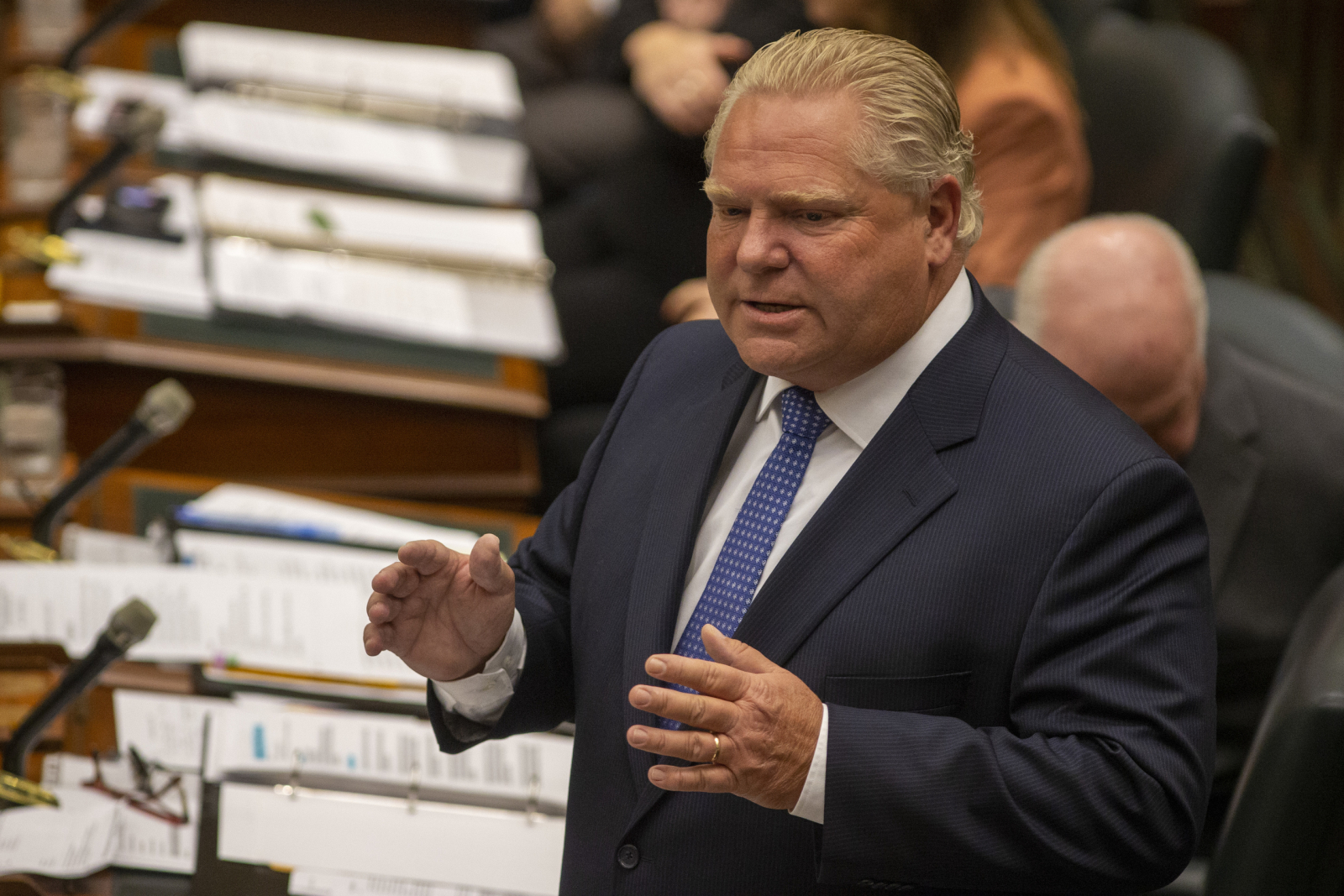 Ontario Premier Doug Ford at Queen's Park in October 2018. The Ford government came under fire over the environmental impact of its zoning decisions Tuesday. File photo by Carlos Osorio
Previous story
Next story

Gill, the parliamentary assistant to Municipal Affairs Minister Steve Clark, made the remarks during question period after the opposition raised an investigation by Canada’s National Observer, released last week, which found the government had used municipal zoning orders (MZOs) to override environmental issues 14 times. An MZO is an unappealable order that allows the minister of municipal affairs to skip the local planning process and decide how land can be used.

“How can the minister justify issuing so many MZOs when we know they should be used sparingly, as to not override important planning processes?” asked Ontario Liberal environment critic Lucille Collard.

“When the government uses this exceptional power under the guise of recovery measures to allow for the destruction of protected wetlands, endangered species or important agricultural land, it may be in the interest of some developers, but it is certainly not in the public interest. Economic recovery is important, but not at the cost of the future generations who will have to grapple with the impact of these decisions.”

Gill did not directly address the environmental impact of the orders, but instead emphasized examples where MZOs have been used to fast-track long-term care homes and medical supplies. (Some MZOs did enable urgent projects, but the Ford government has also used them to allow developments on farmland and wetlands.)

People with names matching those of executives and senior staff for those developers linked to the nine most controversial projects have collectively donated at least $112,915 to the party over the last three years, the analysis showed. Three developers also contributed $150,000 in 2018 to the third-party political advocacy group Ontario Proud, which supported the PCs in that year’s election.

The province has said political donations don’t play a role in its decision to issue MZOs, and that the orders are aimed at critical infrastructure and boosting Ontario’s economic recovery from COVID-19.

Under fire in question period Tuesday, the PCs didn’t address criticism about the environmental impact of MZOs, the subject of a @NatObserver investigation released last week. But PC MPP Parm Gill said the government “will not apologize." #onpoli

Later Tuesday, the Ontario government announced a $12-million infusion of cash over the next three years for the Greenbelt Foundation, a non-profit primarily funded by the province that stewards protected Greenbelt lands.

The government’s announcement didn’t point out that the $12 million is a renewal and maintains the same level of funding the foundation typically receives from the province. The deal was finalized in December, the foundation said in a separate press release.

Critics questioned why the government would make the announcement now, and said it was an attempt to distract from a flurry of negative media attention about the Ford government’s use of MZOs and a planned highway that would cut through the Greenbelt.

“I’m glad the Ontario government is starting to recognize the importance of recycling, but not when it comes to recycling their funding announcements,” Collard said in a statement.

“I think people are right to be skeptical of this announcement,” she said in a phone interview. “They’re right to imagine that this is a diversionary tactic.”

In a statement, Green Party Leader Mike Schreiner said the government is “feeling the heat” from public opposition to MZOs and the highway builds.

“The government's Greenbelt announcements will not cover up the destruction from these and other decisions,” he said.

“I support funding for the Greenbelt Foundation, but I question the government's priorities when they're building highways through large sections of the Greenbelt, gutting conservation authorities and destroying wetlands.”

The office of Environment Minister Jeff Yurek didn’t respond to questions about the timing of the announcement.

In an email, Greenbelt Foundation spokesperson Michael Young said the announcement was delayed by the COVID-19 pandemic, which was worsening in December.

“I think the general feeling was that COVID-19 was rightly top of mind at the end of last year and so this announcement should wait,” he said.

The investment will be used to plant trees, enhance recreational activities and support green infrastructure, the government said in its press release. It will also ensure the foundation can maintain research programs and continue public outreach.

The Ford Government is a lazy

The Ford Government is a lazy government. Instead of looking for sensible, progressive, and sustainable solutions it uses the bully pulpit of electoral "victory" to push through short term and self serving measures that will become albatrosses for future government. One could almost imagine that they are following the autocrat's playbook the late unlamented POTUS used to trash his entire nation. Petty autocrats should re-think their assumptions.

Because...of course they will. #[email protected]&#