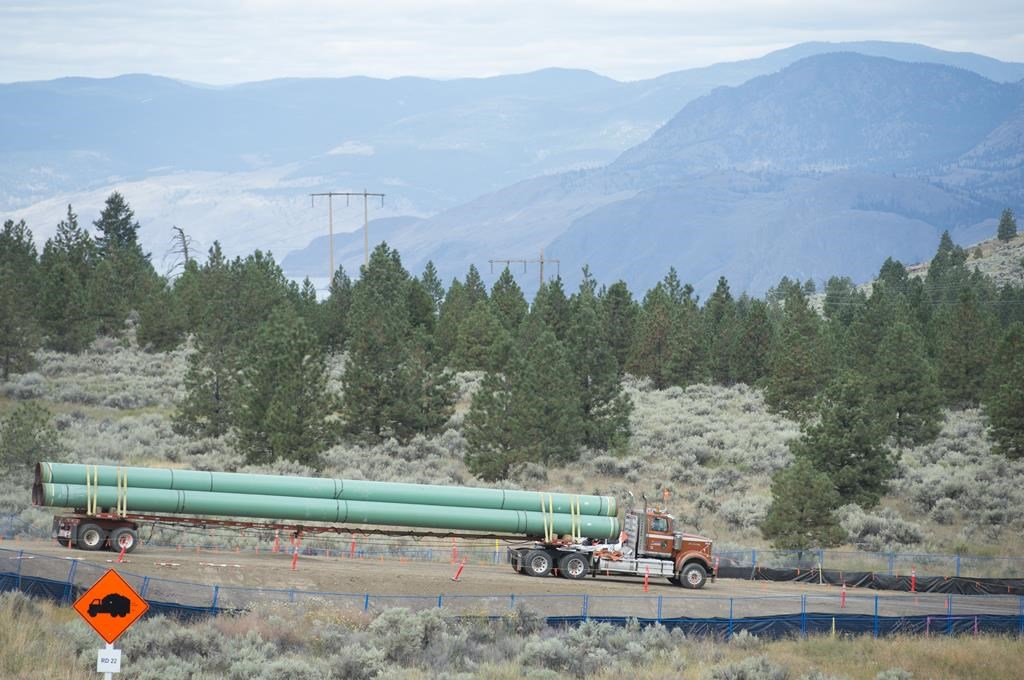 Construction of the Trans Mountain pipeline is seen under way in Kamloops, B.C., Tuesday, Sept. 1, 2020. THE CANADIAN PRESS/Jonathan Hayward
Previous story
Next story

CALGARY — Federal government-owned Trans Mountain is asking the Canada Energy Regulator to keep secret the identities of the companies that provide insurance coverage for its pipeline system because of fears environmental activists will target them.

In a submission dated Monday, the company that operates the Trans Mountain pipeline and its expansion project says there is evidence that "certain parties" are using filings in the regulator's database to identify insurers and pressure them to drop their policies for the pipeline.

The filings come days after Indigenous youth in Vancouver blocked the entrances of buildings housing insurance companies to demand they stop insuring the pipeline, resulting in four arrests.

Trans Mountain says it saw a significant reduction in available insurance capacity in 2020 and, when it found partial replacement policies, it had to pay a significantly higher cost.

In 2019, a coalition of 32 environmental and Indigenous groups said they had sent letters to 27 insurance companies demanding they drop coverage of the Trans Mountain pipeline or refuse to provide policies for the expansion project, including lead liability insurer Zurich Insurance Group, based in Switzerland.

The coalition said Zurich had intended to continue its coverage of Trans Mountain, but the pipeline confirmed last July that Zurich had decided not to renew the policies.

"If the name of Trans Mountain’s insurers is disclosed publicly, ongoing targeting and pressure on those insurers to stop insuring the pipeline are likely to result in material loss to Trans Mountain and its shippers in the form of higher insurance premiums (due to a smaller pool of insurers available to Trans Mountain) and challenges in maintaining adequate insurance coverage," said Trans Mountain in its letter to CER.

It asked the regulator for a decision by March 15 so it has time to complete its annual financial resources plan update, including its certificate of insurance, before April 30.

I wonder what the insurers'

I wonder what the insurers' shareholders are allowed to know.
Maybe when we seek or renew insurance policies, we should ask the broker to obtain certification that they have not done new business with TMX or any other expansion pipeline.
Because in this purportedly "market-driven" economy, certainly we should be allowed to vote against insurers with the $$ we expend on life insurance, car insurance, house insurance ...
And besides, who owns TMX after all???
Can anyone point me to an analysis of Canada Pension Plan's exposure to losses from climate change, investment in tarsands expansion in any way with the possible exception of cleanup? And that should be extended to lending institutions and insurers who intend to be last off the field, reaping premuim rates as other insurers and lenders decline to participate.

And in the end? Canadian taxpayers pay. Again. And it's still secret?

Sorry: talking to myself

Sorry: talking to myself here, but my second sentence was far from clear. It should have been more like:
Maybe when we seek or renew insurance policies, we should sk the broker to obtain certification from the insurer's parent company, that their group of companies has not done new business with TMX or any other expansion pipeline.

You should not believe

Secondly, by its own admission Trans Mountain has a problem with safety, hence the two-month shut down. Would you want to insure such a company?

The request is interesting

The request is interesting from at least two perspectives. First, it is clearly motivated by fear. I am not sure the last time a corporate endeavour demonstrated fear openly. Second, it suggests that the corporation has been told by insurers that if the smell gets too bad, they will depart. That suggests other economic tactics by the environmental movement have been more successful than is generally known.